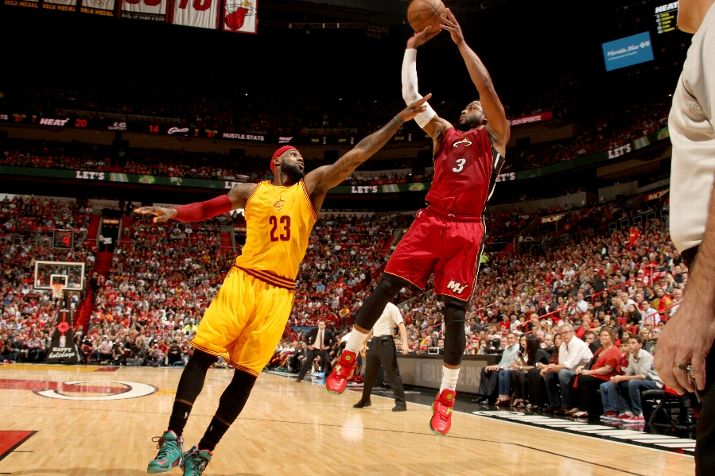 LeBron James’ first game back in American Airlines Arena was met with applause and some boos, trips down memory lane and then some trips onto the court, as the Cavs hobbled with the Miami Heat only to lose in the end, 91-101. The biggest story of the night was best friends and former teammates LeBron James and Dwyane Wade going head to head for the first time in 5 years.

Luol Deng scored 25 points, adding eight rebounds, eight assists and an excellent defensive effort against LeBron James. Dwyane Wade finished with 31 points, five rebounds and five assists. James led the Cavs with 30 points and eight assists of his own, followed by Kyrie Irving who had 25 points. In the end, the narrative remains the same: the Cavs lackluster defensive effort put them into an unsalvageable hole against a team they simply underestimated.

Here are the full highlights of their Christmas Day duel:

Without Anderson Varejao, who’s out for the season with a torn Achilles, Tristan Thompson was expected to start for the Cavaliers at the Center position. Instead, the Cavs started PG Kyrie Irving, SG Mike Miller, SF Shawn Marion, PF LeBron James, and C Kevin Love.

Both the Cavs and Heat moved the ball around pretty well and got everyone involved. Luol Deng and Dwyane Wade in particular got it going in the first quarter for the Heat. Deng had 9 points, five rebounds, and three assists while Wade had 12 quick first quarter points and two steals. James had three turnovers in the quarter, but settled into the game after Irving’s strong start by going to the line seven times and forced three quick fould onto backup center Udonis Haslem. As a team, however, Cleveland’s undersized starting lineup had seven turnovers in the first which resulted in 18 points in the paint for the Heat. Despite their turnovers and the slow start, Cleveland shot 62.5% in the first quarter on 10-16 shooting. Miami shot almost as well at 56.5% on 13-23 from the field.

The Miami Heat blew the game open in the second quarter with a 10-1 run, dominating both sides of the ball. LeBron James has been terrific in terms of getting to the free throw line, shooting 13 free throws through two quarters, but he struggled with ball handling and decision as he continued to turn the ball over; as a team the Cavs turned the ball over nine times in less than 15 minutes. The Heat took advantage of Cleveland’s mishaps, as Dwayne Wade caught fire and shot 10-16 from the field with a season high 24 first half points. By the end of the first half, the Cavs were hobbling to locker rooms having surrendered 32 points in the second quarter.

Cleveland turned it around in the third quarter, as the Cavs outscored Heat 25-15 and reminded Miami of their previous 23-point blown lead defeat against Philadelphia. LeBron James went through a dramatic sequence in the quarter, suffering from leg tightness after jumping over a front row and getting called for a technical after hanging and lifting himself on the rim after a dunk; but in the end, the Cavs found themselves within three points of Miami.

Down the stretch in the fourth, team defense became a major issue for Cleveland yet again. There were some impressive individual lockdown jobs, but as a whole it was not pretty. Wade finished with 31 points, mostly due to the energy Dion Waiters who had three steals and two blocks and gave the Cavs energy on the defensive end.

For Cleveland to be the elite offensive team that they are on paper, they must utilize Kevin Love much more often. Love’s body language wasn’t good when he wasn’t getting the ball possession after possession, but he had a point. Love was quiet, shooting 5-13 from the field, but most were long range contested shots. Love is a great low post scorer and the Cavs should make every effort to get him working one-on-one in the low post.

The Heat seemed to win all the hustle plays down the stretch also, but the silver lining is all of these issues can be worked out. Practice makes perfect, and hopefully LeBron can bring a stronger team with him the next time he visits his second home. 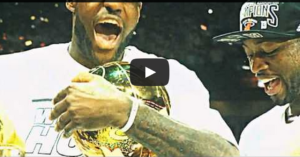