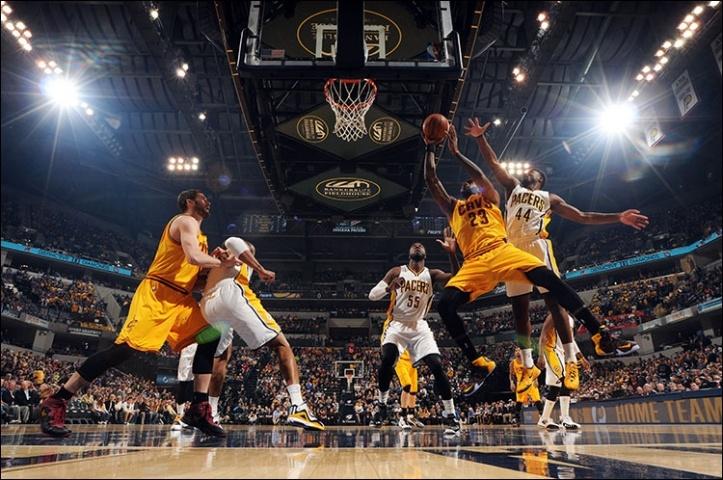 In what had the makings of a “trap” game, the Indiana Pacers, now 19-32, ended the Cleveland Cavaliers’ 12-game winning streak with a 103-99 win. Former Cavalier CJ Miles led the way for the Pacers with 26 points in the game. LeBron James and Kyrie Irving shined for the Cavs with 25 and 29 points respectively.

Coming out of the gates strong has been a hallmark for the Cavs over the season, especially for one Kevin Love, who leads the Cavs in first quarter scoring. Love had five points in the opening minutes and the Cavaliers enjoyed an 11 point lead, while shooting an incredible 65%. Nothing out of the ordinary here. Eventually the Pacers would shrink the lead to four heading into the second, but the Cavs still carried the momentum going forward.

Apart from the difference on the scoreboard, there really wasn’t much of a story heading into halftime. Kyrie Irving hitting a tough long-range bomb to give the Cavs a 55-47 halftime lead, was just about the only highlight in the first half, for either teams. The game, to this point, comprised of mostly set plays and jump shooting.

The Cavs continued to build their lead heading into the third quarter. They pushed the lead to a game-high 13 before LeBron James sat, which was when the Pacers went on a run. They scored six unanswered points before Coach David Blatt put LeBron back into the game following a timeout. The Pacers ended the third on a 13-3 run, bringing the Cavalier lead down to just three with the scoreboard reading 70-67 at the end of 3 quarters.

#Cavs are only shooting 34% since the first quarter, allowing Pacers to hang around…

Entering the fourth, the Pacers were ignited by a Solomon Hill dunk in traffic over the bigger Tristan Thompson. He soon followed that up with an and-one layup in transition and a jump shot for seven early fourth quarter points. However, LeBron wouldn’t let that go unanswered, as he had his own slam on a play, as well as two tough fade-away jumpers for six quick Cavalier points. He even blocked Luis Scola with his left hand in transition for a play reminiscent of the LeBron James in 2009.

Solomon Hill would continue his surge with nine points in the quarter and C.J. Miles caught fire with three triples to bring the Pacers in front by three points. In a back-and-forth sequence, Shumpert hit a corner three-pointer to give the Cavs the lead, but George Hill buried an impossible off-balance three-pointer while getting fouled. He would knock down the free throw to give Indy a three point lead with just over a minute left in the game.

With the Pacers sporting momentum on their run and with their sold-out crowd supporting them, the Cavs were facing an uphill battle. LeBron and Irving both clank three pointers, James would air-ball a shot attempt, and Irving would commit a costly turnover, eventually giving the Pacers a six point lead and ultimately, the win.

Something to note towards the end of the game was Blatt’s decision to bench Kevin Love for most of the fourth quarter. He missed two hesitant three pointers, and was generally out of his groove at the start of the fourth. This isn’t the first time it’s happened, as Blatt has tended to favor Thompson’s defense in tough situations over Love’s inconsistent offense. Love’s 5 first quarter points would be his only points in the ball game.

With the win streak over, the Cavs fall to 31-21 on the season and back to fifth place in the Eastern Conference, after briefly holding a third place tie with the Washington Wizards. They have a chance to get back on track this Sunday against the struggling Los Angeles Lakers in Cleveland.

Click on the next page to see the highlights and top plays from tonight’s game:

Kyrie Irving throws up a long three-pointer during the second quarter:

LeBron James blocks Luis Scola with his left hand on the fastbreak in emphatic fashion: