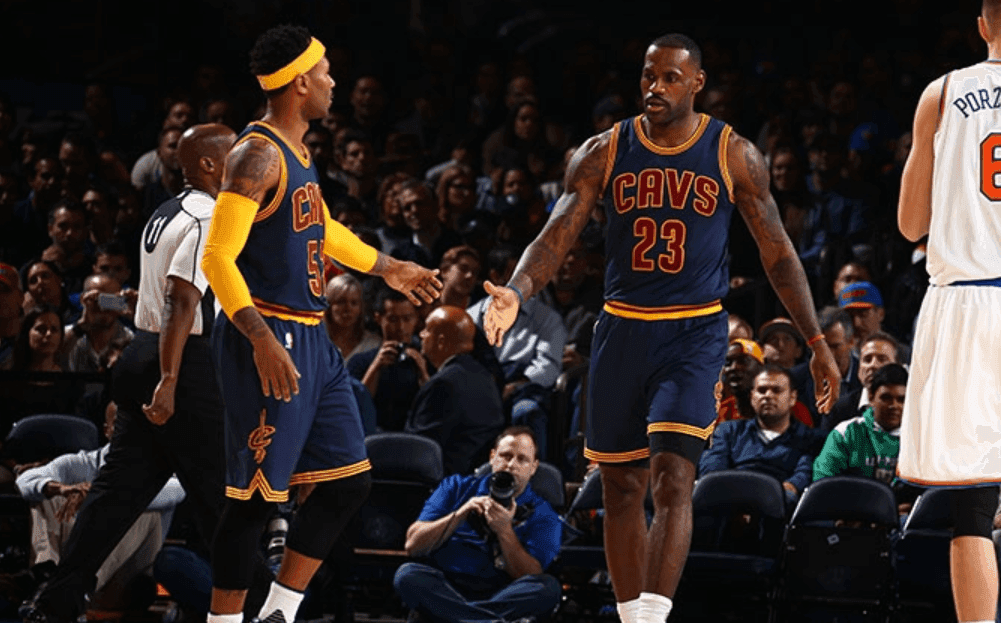 The Cleveland Cavaliers were able to grind out their 8th consecutive win tonight at Madison Square Garden, sending the Knicks to their second defeat to the Cavs in the last eight days. The Cavs were able to buckle down defensively in the second half, holding the Knicks to 31 points after the break. The fourth quarter was once again time for LeBron James to take over while the rest of the team, with the exception of Mo Williams, struggled from the field.

The Cavs started out strong in the first quarter, with a balanced effort that saw six players score while racking up seven team assists on 11 made field goals. Carmelo Anthony scored 14 of the Knicks 23 first quarter points to help keep them within single digits. The Cavs held a lead as high as 8 early on the quarter, and would maintain a 6-point lead at 29-23 after the first.

Cleveland started the second quarter cold, scoring only 6 points in the first six minutes of action. The Knicks took advantage of the sluggish Cavs and took a 6-point deficit and turned it into a 7-point lead going into the half. Carmelo Anthony continued his strong offensive performance, leading the Knicks with 22 first half points.

After giving up 30 second quarter points, the Cavs would lock in on the defensive end coming out of halftime, but their offense still struggled. For the game, Kevin Love and JR Smith combined to shoot 5-20. Neither played appeared to be in any rhythm at all, and Smith would eventually leave the game with what appeared to be an injury to the abdomen. The offense was bad in other ways as well. As a team, the Cavs only tallied 12 total assists, shot 6-28 from the 3-point line, and missed 13 free throws. We had just as many turnovers as assists. The ball movement was lacking, which comes as a surprise from a team that had been ranked 3rd in the NBA in assists per game. The film session following this one on the offensive end should not be pretty. Fortunately for the Cavs, LeBron had some gas left in the tank in the fourth quarter.

LeBron asserted himself on both ends of the floor in this one. He scored 12 of his game high 31 points in the fourth, and he did so while holding Carmelo Anthony to just four second half points. He equaled the Knicks’ point total in the 4th quarter all by himself. He also contributed half of our 12 total assists for the game. Aside from the 20 points that Mo Williams poured in, there wasn’t much help from the rest of the short-handed Cavaliers lineup.

The Cavs sit alone atop of the eastern conference with their 8-1 record, but the games they’ve won in the last week have not been necessarily pretty. Every team that the Cavs play is giving them their best game, recognizing that the Cavs are favored heavily to run away with the eastern conference. The undermanned lineup is fighting through without their starting backcourt, and even though it isn’t pretty, they are getting wins. It is a good sign that the Cavs can win these games while not playing their best basketball. Fans can sleep well knowing that Love and Smith are not going to shoot this poorly very often, and that help is on the way when the rest of the lineup gets healthy.

There is little rest for the team to regroup, as the schedule sends the team to Milwaukee to play against the young and energetic Bucks tomorrow night. Hopefully the result is the same and the offense is easier to watch.

Mo Williams drives around to the three point line, and throws up a long alley oop to LeBron James for the strong finish over Carmelo Anthony.

LeBron holds the ball and surveys the court, before dishing a beautiful pass by three Knicks defenders to THompson for the dunk!

LeBron James stays with Melo on his drive, and rejects his shot into the stands when he goes up for the shot.

LeBron drives the ball, spins bast Jose Calderon at the three point line, goes hard to the basket, goes up and under past Robin Lopez, and scores!

Melo plays LeBron so well, but LeBron is just that much better.