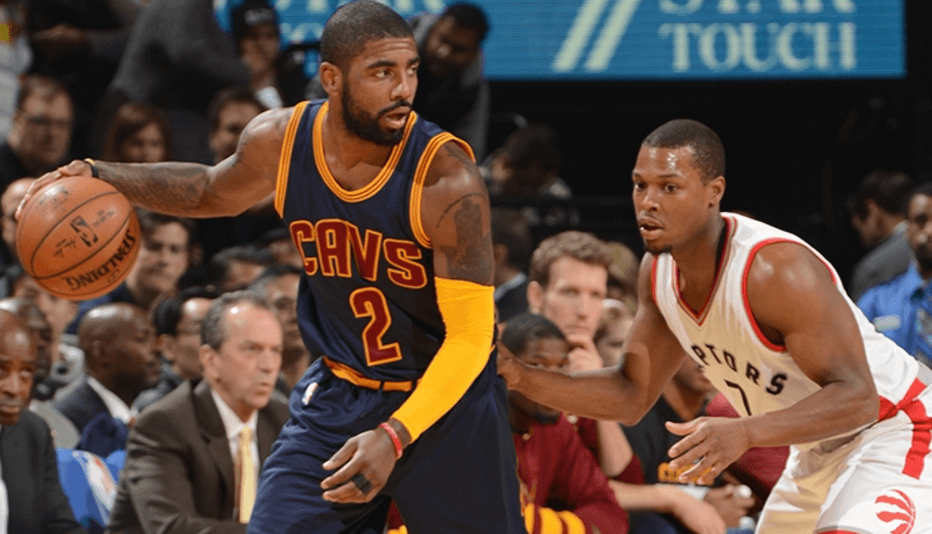 The Cavs held off their familiar eastern conference foe Toronto Raptors tonight for their first road win of the season, winning by the score of 94-91. The Cavs jumped out to a quick lead and held off multiple attempts by the Raptors to take command of the game for their second straight win to start the season. The Big Three of LeBron James, Kyrie Irving and Kevin Love did most of the heavy lifting in this one as the Cavs continued their dominance over the Raptors and their dynamic backcourt of Kyle Lowry and DeMar DeRozan.

The Cavs scored the first six points of the game and didn’t give up the lead until late in the fourth quarter. Kyrie Irving led the charge offensively in the first half, outscoring last year’s eastern conference all-star point guard Kyle Lowry 15-9 in the first 24 minutes. Kyrie is playing with what appears to be a new level of confidence, and it shouldn’t be a surprise to Cavs fans after his play in the final three games of the finals last year. He scored 90 points in the last three games of the finals, and followed up his postseason by starting at point guard and winning a gold medal under his college coach Mike Krzyzewski. It makes sense that he would play with an extra bounce in his step early in the season.

A combination of scattered offense behind Kyrie allowed the Cavs to capture a 50-40 lead at halftime, which included a 12-4 run to end the half after the Raptors cut the lead to two at 38-36. The only differences in the Cavs this year and last year is on the bench, and it will be something to pay attention to as the season progresses. The bench didn’t score their first point tonight until an Iman Shumpert free throw with 8:38 remaining in the second quarter. For the game, the bench only made two field goals and scored just 10 points.

The Cavs had to withstand several runs from the Raptors after halftime, with most of them being driven by the play of DeRozan. The all-star started the season with a 40-point outburst, and followed it up with 32 more tonight. The Cavs only relinquished the lead once during the game, though, and ultimately made enough plays on both ends of the floor to secure the win and run their record to 2-0.

RELATED: You can buy a Cavs championship ring, but you won’t believe the price

Kyrie Irving led the team with 26 points, six assists and six rebounds. LeBron James followed with 21 points, eight rebounds and seven assists. The starting frontcourt of Kevin Love and Tristan Thompson both racked up double-doubles, with Love scoring 18 and grabbing 10 boards, while Thompson scored 11 and piled up 10 boards of his own.