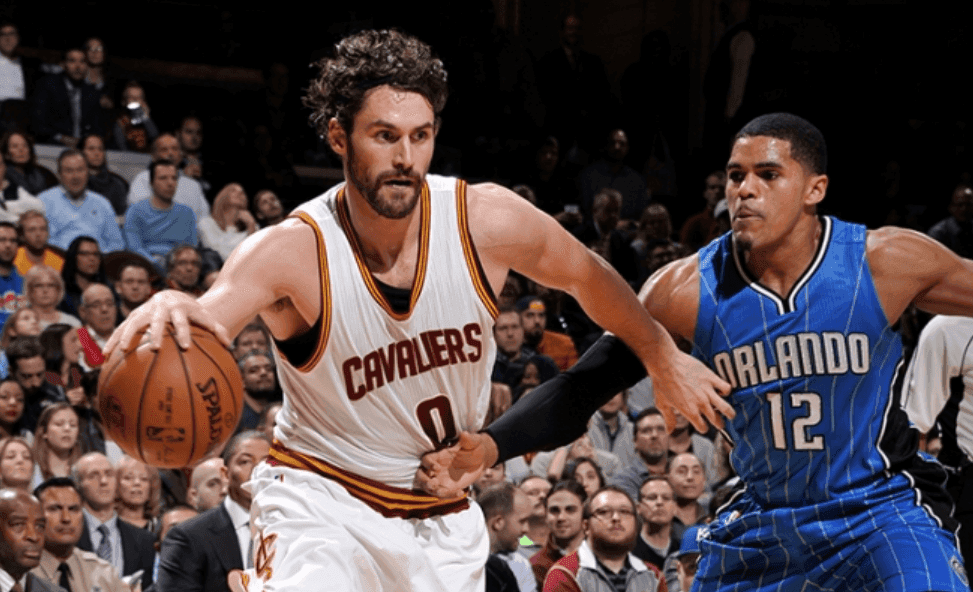 As LeBron James would say, the ball had energy tonight, as the Cavs dismantled the Orlando Magic at the Q by the score of 117-103. The Cavs had a balanced effort in almost every statistical category tonight, never scoring less than 25 in any given quarter and finishing the game with a season high 34 combined assists. Cleveland got off to a great start in the game, and withstood a second quarter run before turning this game into an offensive showcase.

Leading the offensive charge were Kevin Love and JR Smith, who with 34 and 26 points respectively, combined for more than half of the Cavs scoring for the game. The two put on a shooting clinic, combining to make 21-34 field goals, including 12-19 from beyond the 3-point arc. Smith was his usual gun-slinging self, making 3s in transition and in the half-court game. Kevin Love got hot in the second quarter, and at one point scored 15 consecutive points for the Cavs. He scored when the team went to him in the post, when he was knocking down any one of his 6 threes, and from the free throw line after getting the young Orlando defenders to bite on his pump fakes. With Kyrie Irving and three other key players injured, it must be scary for opposing defenses to know that the Cavs have two guys not named LeBron James that can combine for 60.

The effort on the offensive end was even more balanced than that, though, and was mainly facilitated by the duo of James and Matthew Dellavedova. The two primary ball handlers for the Cavs combined for 30 points and 22 assists in this one, helping the team to stay fluid on offense throughout the game. The ball was moving constantly in this one, and these two were usually the ones controlling the movement and tempo. Dellavedova also contributed by hitting four 3s and making the Magic defense pay for the help they had to give when James and Love had the ball.

The game was only truly competitive in the second quarter, when the Magic mounted a comeback after falling behind 19-6 to start the game. The Cavs defense let up and the young, athletic Magic were able to make outside shots and score in transition. Unlikely contributors like Andrew Nicholson and Shabazz Napier played well in the quarter, and made plays that helped Orlando take the lead in the second. Nicholson ended the game with 18 points off the bench, and Napier finished with 11 points and 9 assists. The run was short-lived, though, as Love would soon put on a show offensively, carrying the Cavs back on top to a 59-55 halftime lead.

The defensive effort picked up in the third quarter, as the Cavs held the Magic to 7-18 shooting and just 21 points. Meanwhile on the offensive end, the Cavs scored 33 on 10-19 shooting, including 5-11 from behind the 3-point line. The Cavs carried a 16-point lead into the 4th quarter, and were never threatened from then on.

The offensive onslaught is a sign of what the Cavs are capable of when the ball moves and everyone is engaged in each possession. In total, the Cavs had 18 made 3-point field goals, and were just one shy of a team record. Only nine of our 43 made field goals came without an assist. The all-around effort appropriately came in a game where LeBron James joined all-around great Oscar Robertson as the only two players ever in the top-25 of both career points and assists. Hopefully this type of performance is a stepping stone toward getting back toward the top of the list of assist-leading teams in the NBA, because when the scoring is balanced, we are a very dangerous team.

Kevin Love goes off in the 2nd quarter just as the Cavaliers needed him. Down 10 in the second, Love scores 17 straight for the Cavaliers without a miss and finishes with 20 for the quarter.

LeBron James goes 1-on-1, draws the double team, and once the double leaves, drives and shoots a hook shot a la Kareem Abdul-Jabbar!

LeBron James contests the jumper and just takes off to the offensive side. Kevin Love realizes it, and once he rebounds, immediately sends the pass to LeBron for the slam!