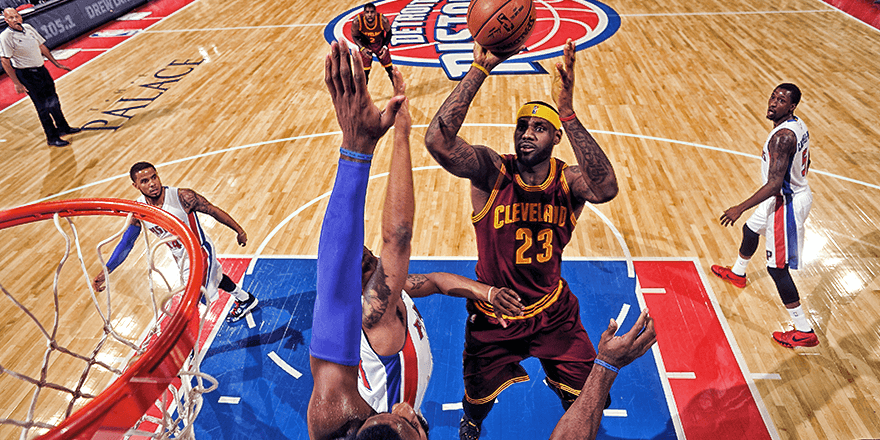 In an always hard fought game at The Palace of Auburn Hills, it was stellar shooting from Kyrie Irving and King James’ willingness to get to the free throw line that made the major difference in tonight’s 103-95 Cavalier victory.

Irving was on fire the whole night as he tied his season high with 38 points on 13-23 from the floor and 6-10 from downtown. Scoring wasn’t the only thing the young point guard had in his repertoire tonight as he also recorded six assists and three steals. He was a major contributor on defense, with his three steals leading the Cavaliers while also being the primary ball-handler. It’s safe to say that LeBron James is back to his usual self, scoring over 30 yet again and also recording six boards, seven assists, and a steal. James also found himself attacking the basket all game with an undersized defender, which allowed him to get to the line early and often. He finished 10-11 from the free throw line.

James’ highlight of the night was a full court pass off of a made basket courtesy of Kevin Love which he slammed home with defender Kyle Singler breathing down his back:

Irving and James picked up the slack from the rest of the team offensively as it was a pretty poor team shooting night. Other than the hot shooting of James and Irving, the rest of the team shot just 15-46 from the field. The main shooters on the team in Iman Shumpert, Kevin Love, and J.R. Smith all hit a three-pointers, but combined to shoot just 3-19 from distance on the night. While the offense struggled mightily, the Cavs can look back and be proud of the way they played defense tonight. They forced the Pistons into 18 turnovers and recorded nine steals, with at least six different players recording a steal.

The Cavaliers are arguably at their strongest when they are in transition as clearly illustrated by this play. Here’s why you don’t want to turn it over to a guy like Irving who is crafty on the break:

Looking back at this game it was certainly closer than the scoreboard indicated. The Pistons were never out of it due to poor shooting as a team overall by the Cavaliers, but luckily Irving and James were able to carry the team to a hard-earned victory. Three-point shooting must be improved going forward, as Shumpert, Smith, and Love combined to shoot an abysmal 16% (3-19) from downtown. Another worrying stat is that although James and Irving shot a combined 17 free throws, no other Cavaliers were able to get to the free-throw line. All in all, Kyrie Irving stole the show in Detroit tonight with his 16 fourth quarter points and LeBron James offered the young star enough support to extend the Cavaliers’ winning streak to seven games.

Watch Kyrie Irving as he puts the nail in the coffin with this nasty step-back three-pointer in D.J. Augustin’s face:

The Cavaliers return to the Q tomorrow night for a tough test vs. a Western Conference opponent in the Portland Trailblazers. LaMarcus Aldridge will still be a threat with his injured thumb, so the Cavalier frontcourt will have some work to do if they want to extend their streak to eight straight victories tomorrow night! 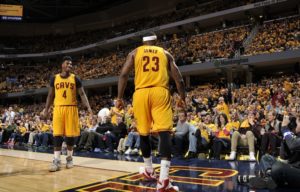