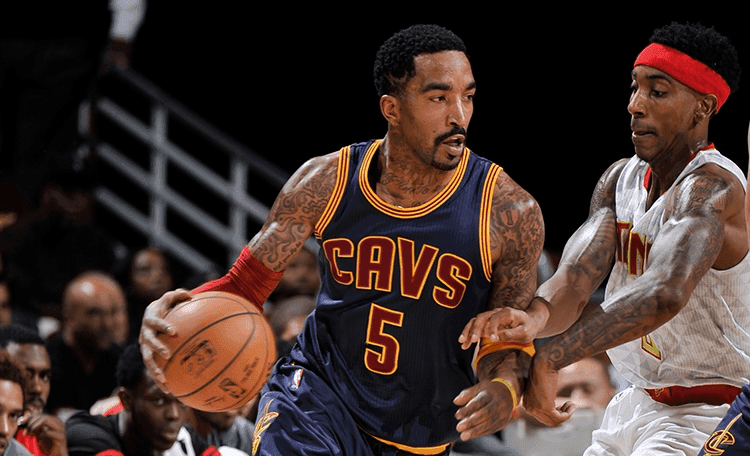 The Cleveland Cavaliers looked to build a new streak as they hosted the Atlanta Hawks Saturday night at The Quicken Loans Arena. It was supposed to be a tough game for the Cavaliers with Mo Williams and Timofey Mozgov joining Kyrie Irving and Iman Shumpert on the injury list, but the “Next Man Up” mentality of the men in Wine and Gold prevailed on this occasion.

It seemed like deja vu from last season’s first meeting when Cleveland got off to a hot start from three point land as J.R. Smith, Kevin Love, and Jared Cunningham teamed up to hit long ball after long ball. The Cavs also looked to establish Love’s presence down low and it was a success as the All Star power forward finished the first twelve minutes with 10 points.

In the second quarter, Cleveland did not hold back as they continued their excellence on both ends of the floor. It was the Richard Jefferson Show to begin the quarter scoring eight quick points, but the man of the period was Tristan Thompson who got the nod as the team’s starting center to fill in for Mozgov. The energetic big man finished the half with 12 rebounds, five of those were offensive, and five assists. As a sidenote, Atlanta coach Mike Budenholzer got too close for comfort when he bumped into referee Ben Taylor and that prompted an ejection. Cavaliers led after 24 minutes, 57-42.

The third quarter was no different for both teams. The Cavaliers kept the ball active and it caught the Atlanta defense napping a number of times. The lead ballooned to it’s largest at 26 thanks to a superb sequence of ball movement that was capped by an aggressive Jared Cunningham drive off a LeBron James pass which netted a Hawk foul. Due to a few lazy passes, the Hawks were able to capitalize and put some life back to their game to trim the lead to 13 entering the final quarter.

The fourth quarter started with James Jones providing quality minutes by hitting two straight three pointers and a big block on Thabo Sefolosha on the break. LeBron James made sure to not let Jones’ effort go to waste as he also picked up his play. The result was him either scoring or assisting on the Cavs’ next 11 points. It was all Cleveland from then on a the good guys went on to win back-to-back games and keep their unblemished record at home, 109-97.

Kevin Love led the attack with 25 points and 12 rebounds while LeBron James fell two assists short of a triple double as he also finished with 19 points and 11 rebounds. J.R. Smith continued to put the ball in the bucket with 15 points and four three pointers, and Tristan Thompson’s tenacious approach resulted in nine points, 16 rebounds, five assists, and two blocks.

LeBron James blocks Paul Millsap, dives to save the ball, which is recovered by Tristan Thompson to J.R. Smith, who hits a three on the fast break.

Justin Holiday gets knocked down without a whistle on offense for the Hawks, the Cavs gain possession and start their break. Hawks Coach Mike Budensholzer gets furious, yelling at a bypassing referee, and even bumping him with his chest. For that, Coach Bud received that “You’re Outta Here!”

J.R. Smith gets beat on the cut by Kyle Korver. Korver gets the ball and elevates thinking he has a wide open shot, but Smith rejects the shot off the backboard.

LeBron grabs the rebound and already knows that Kevin Love is out on the fast break. James turns, and throws a full court pass to Love for the dunk.

LeBron drives on the fast break, goes behind the back to cross Thabo Sefolosha over, and euro-steps around Mike Muscala for the acrobatic finish!