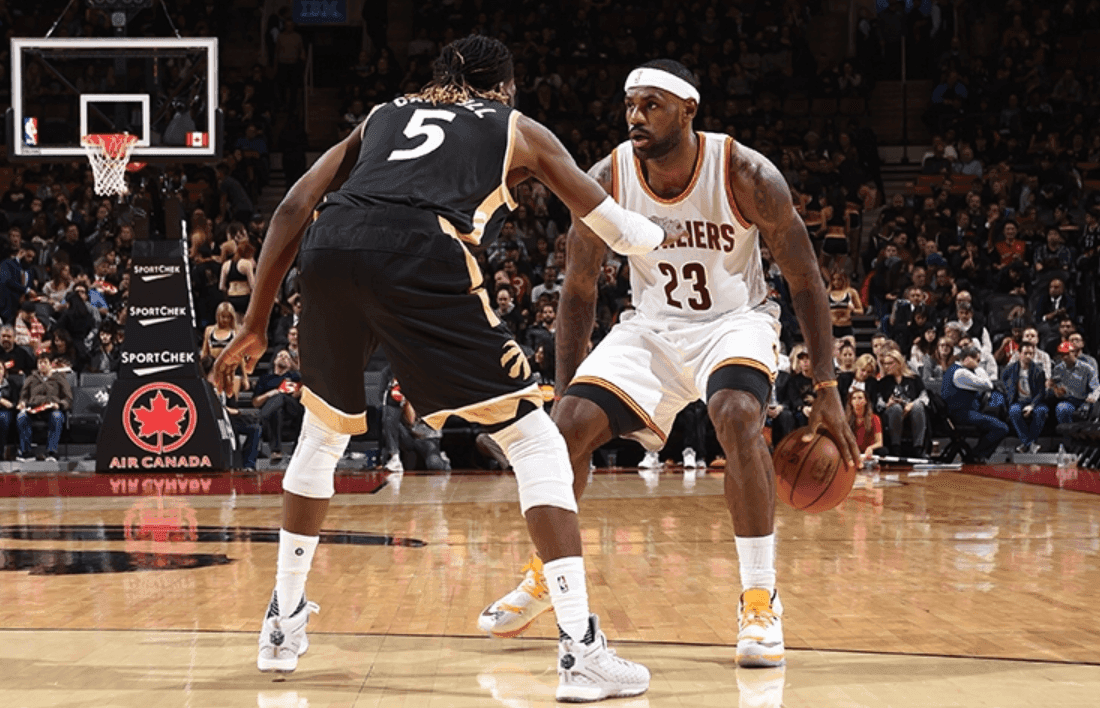 The Cavs lost a tough one tonight in Toronto, by the score of 103-99. The game was close throughout, but the Raptors, behind the scoring and playmaking of Kyle Lowry and DeMar DeRozan, pulled away late in the fourth as the Cavs went ice cold on the offensive end. The Cavs were once again only a version of their actual lineup, as Matthew Dellavedova missed his first game of the season nursing a leg injury. The team was also without Timofey Mozgov, Iman Shumpert and Kyrie Irving, and the depleted lineup hurt the Cavs down the stretch.

The Cavs and Raptors traded runs in the first half, with the Cavs 8-0 run giving them a 7-point lead only to be matched by the Raptors 9-2 run to tie the game after the first quarter. Despite being tied and having given up a lead, the Cavs appeared to be playing good basketball early on in this one. The team assisted on 9 of their 11 made field goals in the first quarter, and Kevin Love was well on his way to another double-double with 8 points and 8 rebounds to start the game. Jared Cunningham got the start at point guard, in place of Matthew Dellavedova and in favor of Mo Williams, who was returning to the lineup after missing three games due to injury. Cunningham is the third Cavalier to start at point guard in 15 games this year, and none of the three are named Kyrie Irving.

The Raptors continued their run in the second quarter, scoring the first 10 points to take a 10-point lead. When the dust settled, their run ended at 19-2 after the Cavs took an early lead in the first. The Cavs had a major run of their own, however, and it started with LeBron James making plays. He made a 3-point field goal, four free throws, and assisted on a James Jones 3-point basket during a 16-0 Cavs run to take control of the game back at 41-35 in the second quarter. The back-and-forth play continued, and the Raptors answered with an 11-0 run of their own. Despite the major swings in momentum, the two teams ended both the first and second quarters tied.

Kevin Love came out of halftime strong, scoring 10 of his 21 in the first five minutes of the second half. The third quarter was a high scoring but neither team gave much ground, and the Raptors took a 2-point lead in the fourth.

And then the Cavs went cold. In total, the team shot 5-18 in the final frame. The Cavs had a respectable 22 assists as a team for the game, but nine of those came in the first quarter, and only three came in the fourth. The ball was sticking on each possession, and Toronto’s aggressive defense was frustrating the Cavs. The Raptors built a 10-point lead late, behind the play of Kyle Lowry. The Cavs were unable to contain him in pick-and-roll play, and he consistently broke down the defense and either made shots or drew fouls to get to the line. Mo Williams drew the assignment on Lowry, but the team effort just wasn’t there defensively and the All-Star point guard carved up the Cavs like a Thanksgiving turkey.

LeBron James led the team with 24 points, 8 rebounds and 6 assists. LeBron went 11-12 from the free throw line, where he has struggled all year. Kevin Love had a double-double with 21 points and 13 rebounds. He shot 5-8 from behind the arc. The Cavs have Thanksgiving off tomorrow, but will return to action on Friday night as they take on the Hornets in Charlotte.

Kevin Love grabs the airball, sends a full court pass to LeBron, who goes up and under Kyle Lowry for the dunk!

With the ball going out of the bounds and the refs taking a little longer than he expected to fix the clock, J.R. Smith takes a seat next to fans sitting courtside and shares a funny exchange. The fan offers Smith a cup of tea or coffee, and Smith politely declines. Gotta love J.R.

Mo Williams gets the ball from Tristan thompson with jsut over two seconds remaining, doesn’t give up on the play, and takes a wrong-footed shot from well beyond half court that swishes!