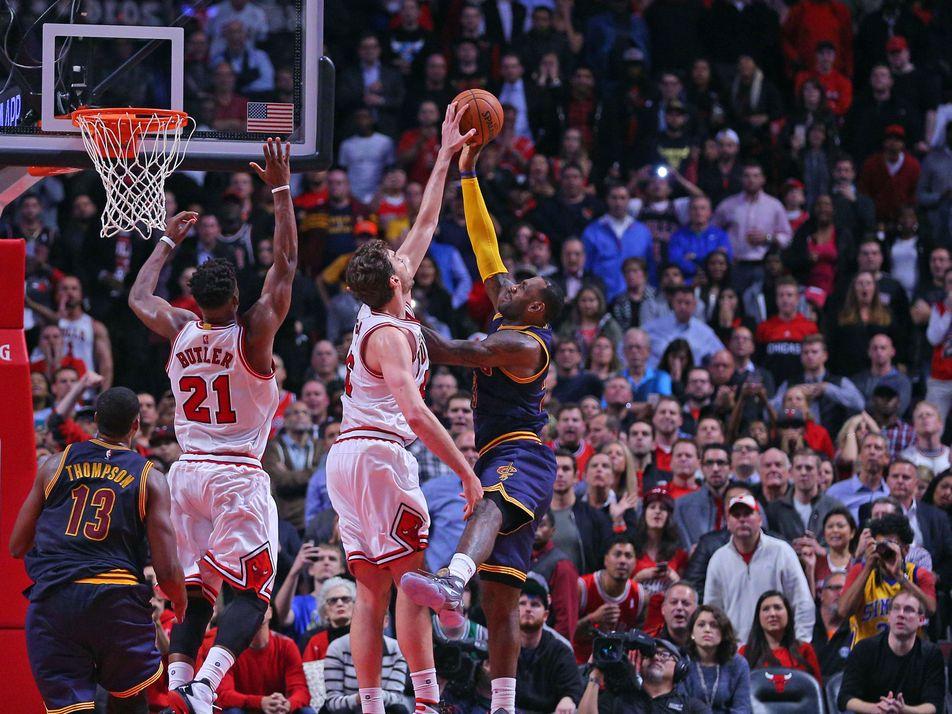 The Cleveland Cavaliers’ season opener was not nearly as hyped as it was last year, but the expectations for the team are at an all-time high, so fans were ready to see the caliber of basketball that they saw in the NBA Finals just four months ago.

Unfortunately, the team dropped its second straight opener, this time to the Chicago Bulls. The Cavs were without two starters in Kyrie Irving and Iman Shumpert, but more importantly did not play with a real sense of urgency until late in the game. This game appeared to be a classic example of a team who knows that the success of their season won’t be determined for a very long time.

Even without Irving and Shumpert, the Cavs got off to a strong start in the first quarter. They started hot, making five of their first seven shots from the field. They cooled off quickly, however, once they went to their bench. They ended the quarter shooting a woeful 3-21 from the field after their solid start. It appeared that the changes to the starting lineup did not affect the first string, but definitely affected the second string, since there was no real threat to create and make shots off the bench. Once their original starting backcourt gets healthy, J.R. Smith and Mo Williams should provide that offensive punch off the bench.

The Chicago Bulls debuted a new head coach and a major change to their starting lineup. Offensive-minded Fred Hoiberg is the antithesis of previous head coach Tom Thibodeau. His style is up tempo, has plenty of ball movement, and provides major floor spacing to make room for Derrick Rose and Jimmy Butler to attack. He started Nikola Mirotic in place of Joakim Noah in order to provide that spacing. The strategy worked, as Mirotic shot the ball well from outside, on his way a team high 19 points.

The Bulls pulled away in the third quarter, gaining a 13-point lead behind the strong start to the second half of Derrick Rose. Rose drew two fouls on Cavs newcomer Mo Williams, one of them coming off a three-point play. The Cavs would cut into the lead late in the third quarter, though, and they did so with LeBron James laying on the sidelines watching. Newcomers Williams and Richard Jefferson were instrumental in an 8-0 Cavs run to finish the quarter, helping them close a 13-point lead down to just three.

A back-and-forth fourth quarter showed the Cavs finally playing with some urgency. They were rebounding better, setting better screens, and generally making more aggressive plays. They were able to take the lead at 83-82 with 5:31 remaining.

JR Smith committed a foul and was called for a technical shortly after that, in a possession that proved costly late in the game. The lead for the Bulls at the time was one point, and after all of the free throws it was four and momentum was on the side of Chicago. The lead grew to eight with under two minutes to play, but the Cavs weren’t done yet.

Kevin Love made two free throws and two three-point baskets to pull within two points. The Cavs forced a miss and called timeout with 10 seconds left, but LeBron James was blocked at the rim by Pau Gasol. With one last chance and the ball out under the basket, the Cavs ran a play for Kevin Love but Williams was unable to get him the ball. He forced a pass in to James, but it was tipped away and time ran out on the Cavs’ season opener.

The team is back in action tomorrow night in Memphis, which will be another tough road test, and the Grizzlies’ home opener. Hopefully the Cavs can pull out a win, and start to build some early momentum – something they did not do very well at all last season.

The Cleveland Cavaliers are hanging tight with the Chicago Bulls as both teams enter the 4th quarter. Although there was a little rust to start, the Cavs are now moving the ball well. As you can see here, Mozgov and Love are picking up where they left off last season!

J.R. Smith is having an off shooting night but that won’t stop him from making use of his ability to drive and use his athleticism. Here is a graceful display of his God-given gifts.