In one of their more impressive games of the year, the Cavs turned a 10-point first quarter deficit into a 24-point blowout win, as they defeated the LA Clippers by the score of 114-90. The win was the third straight road win for the Cavs, who are undefeated on their current road trip thus far. The game was an offensive showcase for the Cavs shooters, as the team nailed 18 shots from behind the arc on their way to a comfortable win. LeBron James led the way for the Cavs, despite sitting out the fourth quarter, with 27 points, 6 rebounds and 5 assists. He shot an efficient 9-15 from the floor, including 3-4 from long range, where he has struggled this year.

The Cavs got off to a slow start after having two days off and staying in Los Angeles. They quickly found themselves down 14-4 after a hot shooting start by JJ Redick. The Cavs had an answer, however, and it was a good one. They ended the quarter on a 14-2 run, which was almost entirely triggered by LeBron and four bench players. The run gave the Cavs a 21-19 lead heading into the second quarter.

The momentum continued in the second, as the Cavs started the quarter on a 16-4 run. Newest Cavalier Channing Frye hit his second and third threes of the game in the stretch, giving the second unit a valuable sharpshooting target that opposing big men are having problems defending. Frye finished the game 5-7 from long distance for 15 points. Frye is 10-14 in his last two games from behind the arc. The Cavs ended the quarter strong again, this time with a 15-3 run. For the half, LeBron led the way with 16 points and 5 rebounds, while Kevin Love followed with 12 points and 5 rebounds. The Cavs dominated the game inside, posting a 28-14 advantage in points in the paint.

The third quarter was more of the same for the Cavs. This time it was JR Smith catching fire and putting on a show. He scored 14 points in the quarter, including 4-4 from long range. As a team, the Cavs went 8-10 from deep in the third quarter alone, blowing the game wide open and enabling LeBron, Love and Smith to all sit out the entire fourth quarter.

The Cavs combined to score 70 points between the second and third quarters, and they did so with some very unique lineups. LeBron played the 4 position at times, with Love at the center spot, while other times Tristan Thompson played center with Channing Frye playing a stretch-4 role. Kyrie Irving and Matthew Dellavedova played simultaneously, and LeBron also saw some time at point guard. It is clear that Coach Lue is working to make sure that the entire lineup is comfortable and in rhythm heading into the playoffs.

Irving and Smith finished with 17 points each, with Irving gathering 5 assists. Kevin Love finished with 12 points and 9 rebounds, and Tristan Thompson finished with 10 points and 11 rebounds.The Cavs will try to make it a perfect 4-0 west coast road trip tomorrow night as they travel to Utah to take on the Jazz. It is possible that tomorrow night is an opportunity for Coach Lue to rest LeBron, but that decision has not yet been made. 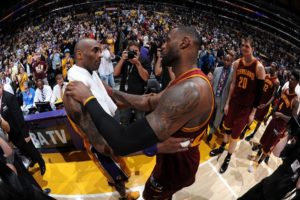