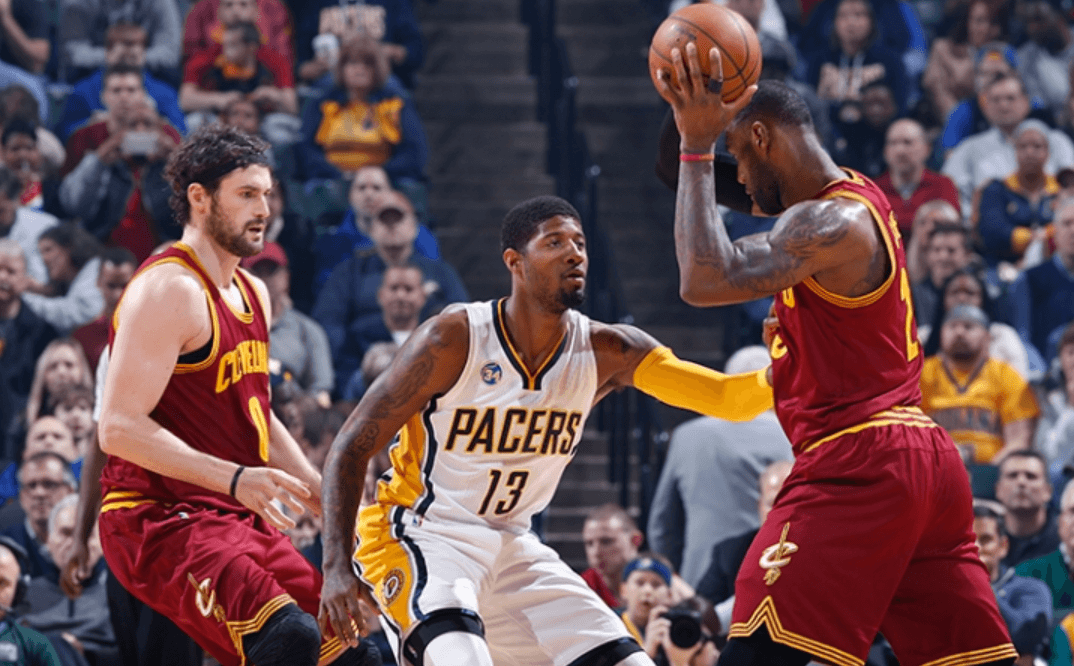 The Cavs earned a hard-fought overtime road win tonight in Indiana, as they defeated the Pacers 111-106. The Cavs put five players in double-figures, and came out on fire once again as they improved to an eastern conference best 35-12, and 5-1 since the change was made giving Coach Tyronn Lue control of the team. The starters accounted for all but 10 points for the Cavs, and although it wasn’t much of a balanced effort, they were able to do enough to finish off the Pacers by executing and making big plays down the stretch.

The Cavs got off to a hot start in the first quarter, with the Big Three leading the way. LeBron, Kyrie and Love scored the first 14 points for the Cavs, and 18 of the team’s first 24 before Coach Lue went to the bench for reinforcements. For the quarter, the Cavs shot 13-20, on their way to 65% shooting and a seven-point lead at 33-26. The lead would have, and probably should have been higher, but the Pacers made a quick run and scored the last 7 points of the quarter, cutting the lead in half from 14 to seven.

Continuing their fast pace to start the second quarter, the Cavs played through Kyrie and Love to maintain the offensive rhythm. Those two scored the first six points of the quarter, and LeBron scored that last 6 by himself. The first half was exactly the style of play that the Cavs have put on display since Coach Lue has focused on increasing the tempo. For the fourth consecutive game, the Cavs scored 60 points or more in the first half. The trio of LeBron, Kyrie and Love were joined by Tristan Thompson in double digits for the first half. LeBron led the way with 17 points on 7-11 shooting. Love and Kyrie combined for 22 on 9-16 shooting. The Cavs finished the first half shooting 62% and assisting on 10 of their field goals. They took a 60-49 lead into the locker room at halftime.

The third quarter was a forgettable 12 minutes for the Cavs. After a blistering first half on offense, the Cavs went very cold. They combined to shoot 5-19 in the third, and were outscored 30-15 for the quarter. The Pacers found their rhythm on offense and clamped down on defense to turn an 11-point deficit, into a four-point lead going into the final frame. As well as the Big Three played in the first half, they basically disappeared in the third quarter. They combined for three total points, as a Love jumper and LeBron free throw were all the points they could muster.

The fourth quarter was a nail biter for Cavs fans, with the game staying within a possession for the majority of the 12 minutes played. LeBron stayed cold for almost the entire quarter, only coming through to make his first field goal of the second half with little more than a minute remaining to tie the game. Kyrie and JR Smith would carry the load offensively for the Cavs. Kyrie scored 15 points after the third quarter, in typical late-game fashion for him. JR was confident all game long with his shot, showing little hesitation on his way to 19 points on 7-14 shooting.

The fourth quarter ended tied at 96, and the Cavs had to dig deep to finish this one out. They would outscore the Pacers 15-10 in the overtime period. The big three would score all 15 points for the Cavs in the extra period, with Kyrie scoring eight by himself. The defense came up big as well, as the Cavs made plays on that end as well. The biggest defensive play came when Kevin Love blocked a Paul George layup to maintain a one-point lead with 48 seconds left to help seal the win. 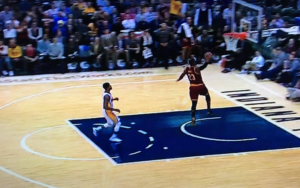