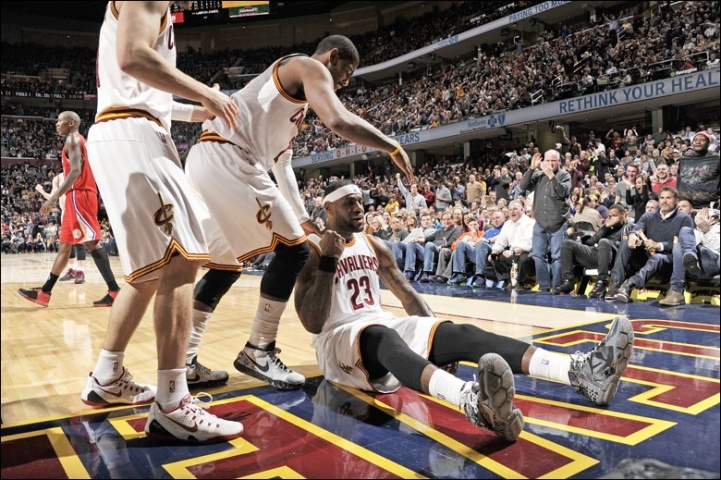 The Cleveland Cavaliers continue their winning ways Thursday night by blowing out the Los Angeles Clippers 105-94 at the Q to extend their win streak to 12 games. LeBron James (24 points, nine assists) and Kevin Love (23 points, nine rebounds) led the way for the Cavs with both playing less than 30 minutes. The Clippers have also been playing well coming into the game, winning seven of their last nine games, including a 20 point win in San Antonio against the Spurs.

In their last game against the Philadelphia 76ers, Kevin Love struggled shooting just 1/7 from the floor, finishing with a mere five points. It prompted him to stay for another half hour after the game to get a few shots up. LeBron James said afterwards he thought Love’s confidence was shaken. Soon enough, the Cavs came out in the press and made it clear that getting Love going on offense was now their priority:

With that, Kevin Love and the Cavs came into the Clippers game strong, taking a sizable lead early with a 30-20 score after the first quarter. Kevin Love had 10 points just in the first three minutes of the game on seven shots; equaling to his entire game total against the Sixers. Lebron facilitated for his teammates, getting 5 assists in the first five minutes, and six for the whole quarter.

Here are one of those assists from James that had Mozgov leading the fast-break:

When he wasn’t getting his teammates involved, he took matters into his own hands:

The early lead just kept on growing, as the Cavaliers opened up a 23 point lead at the half, with a score of 65-42. They were playing with an explosive, high-paced offense, shooting 60% to go along with stellar defense on an offensive-minded Clippers team, holding them to 42%. That included holding their perimeter players to just 1/9 from the three point line. This is a Clippers team that is fourth in the league in both 3pt % and 3 point field goals made, but were missing starting shooting guard J.J. Redick. One of the highlights of the first half was this fast-break lob from Kyrie to LeBron:

The Clippers were visibly frustrated in the second quarter. There were more frustration fouls, and the common fouls were notably harder. Chris Paul was even whistled for a flagrant 1 foul when he wrapped his arms around Mozgov’s neck and dragged him to the floor. It didn’t get any better in the third quarter, however, as the Clippers picked up 4 technical fouls just five minutes into the second half through overly physical play and a little too much chirping towards the referees. Matt Barnes was eventually ejected from the game after picking up his second tech.

Despite this, the Cavs did not cease their onslaught. They continued their rampage, opening up a game-high 32 point lead. This was a total team effort; so much so in fact, that Kyrie Irving scored his first and only bucket in the third quarter, when the Cavs were already ahead by 30. Irving still finished with 10 points with the help of all the technical free throws the Cavs were rewarded throughout the game.

Every Cavalier starter scored in double figures, which is a sign of both a well-coached team and a team willing to share the ball, despite the sheer amount of firepower on the roster. LeBron and Love sat just before the end of the third, signaling for both coaches to bring out their bench and rest their starters.

At the end of the quarter, the Cavs were shooting 50% from the floor, while holding the Clippers, who are 2nd in the league in field goal percentage at 47%, to just 41%.

With both teams’ sporting their second and third string bench players during the fourth, the Clippers slowly trickled back into the game, although it never became a concern. The 105-94 win marks just the 6th time this season that the Clippers have lost by double digits this season.

With enough momentum heading forward, the Cavs have a chance to set their franchise record in consecutive wins, which is currently at 13. They play the slumping Indiana Pacers tomorrow night in Indianapolis, before coming back home to play the struggling Los Angeles Lakers at the Q on Sunday. 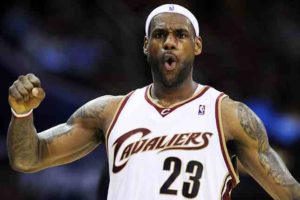