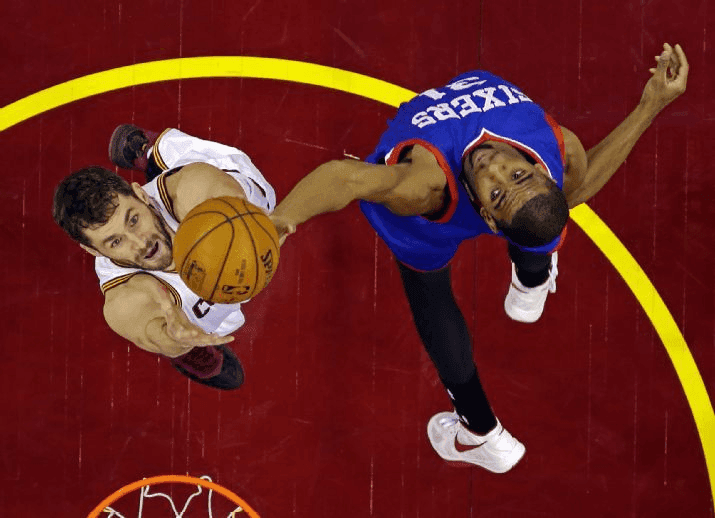 The Cleveland Cavaliers blew an early lead in the 4th quarter, but managed to outlast the Philadelphia 76ers with help of clutch 3’s from Dellavedova and Kyrie to win 97-84. Here are the highlights of tonight’s game:

“They’re lucky they’re playing the 76ers” was a phrase stated by Austin Carr a lot and he could not have been more correct in stating that. Leading by 20 at about the eight minute mark in the third quarter, the Cavaliers stepped off the gas and allowed the 76ers to crawl back to within three at about the seven minute mark in the fourth quarter. Dellavedova caught fire in the 4th quarter to settle the Cavs down after what a series of back and forth scoring. Kyrie Irving regained his player of the week mojo late in the game, carrying his momentum into the fourth to seal the deal for the Cavs with 12 points in the quarter. The Q was especially loud on this special night, as the Cavaliers have looked their best all season with a winning streak that is now 11 games long.

Tonight’s standout performer is no doubt Timofey Mozgov, who was monster on defense with five blocks and recording 10 points and eight rebounds. Physicality served Mozilla well tonight as the big man earned great positioning for rebounds and challenged every shot that came his way. Kyrie Irving has been doing it all with another impressive performance, scoring 24 points on 9-16 shooting and adding five rebounds and assists. If the Cavaliers are in need of a crucial basket, it seems like Irving is the go to man hitting clutch shots to put the 76ers away late in the fourth. LeBron James had a double-double, scoring 18 points and dishing 11 assists, and Kevin Love recorded 15 boards but shot a poor 1-7 from the field only recording five points. Love has been shooting poorly compared to his stint in Minnesota, as he is only converting on 42% of his field goals which is the 2nd lowest of his career.

The unsung heroes tonight would have to be newly acquired Iman Shumpert for playing important roles on defense. Shumpert shot a perfect 100% from the field scoring 11 points and recording 2 steals. His teammate, Dellavedova, also recorded a steal and wore out the Sixers backcourt with Shumpert in the closing minutes. The Cavaliers look to extend their winning streak to 12 games in a showdown with the Clippers at the Q on Thursday February 5th.