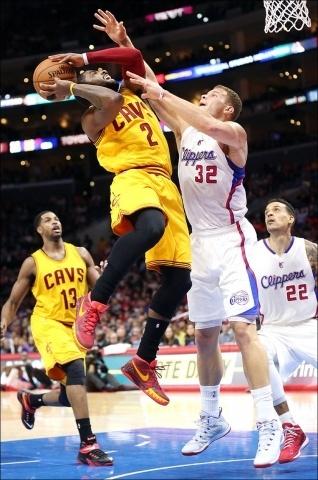 Unlike last night’s game of multiple scoring runs against the Los Angeles Lakers, tonight’s game against the neighboring Clippers was a grind-it-out type of game and the Cavaliers came out the victors by a score of 126-121. In a game that did not feature Kevin Love due to overbearing pain from back spasms, Kyrie Irving and LeBron James led the way for the Cavaliers tonight along with the huge play of Tristan Thompson, who started in place of Love. The Big Three of James, Irving, and Thompson combined for 93 points and 27 rebounds, outplaying the Clippers’ Big Three of Blake Griffin, Chris Paul, and DeAndre Jordan. Following a six-game losing streak, the Cavaliers have run off two straight wins on back-to-back nights in LA.

In a back-and-forth first quarter, the Cavs used a collective effort to start strong against the Clippers. J.R. Smith had his shot going early, Tristan Thompson was his usual active self, and Kyrie Irving was aggressive to start. Those three scored the 18 of the Cavaliers first 20 points tonight, with LeBron James scoring the other two points. In the meantime, DeAndre Jordan was torching the Cavs with eight points and seven rebounds, including three of them on the offensive end mostly on put-back shots. He helped the Clippers withstand the Cavs first quarter offensive explosion until Matt Barnes and Blake Griffin scored nine points for the Clippers to take a 30-26 lead. After Matthew Dellavedova put back his own miss in the paint, Jamal Crawford scored on a long three-point attempt to give the Clippers a 33-28 lead at the end of the first quarter. The Cavs trailed despite shooting 57% from the field in the first because they gave up five offensive rebounds in the quarter.

Cleveland’s hot shooting continued, but their defense also picked up in the second quarter. Whether it was James, Irving, or Thompson, Cleveland went on a 19-7 run over the first six minutes of the second quarter to take a 47-40 lead. The Clippers’ outside shots started falling from that point forward, with LA scoring 24 points in the final 5:40 of the second quarter while connecting on five three pointers in that span. Thompson and Irving kept the Cavs afloat in the final minutes, scoring 10 points to retake the lead at 61-59. LA scored 5 points in the final 34 seconds to take a 64-61 lead at halftime. Irving had 16 at the half, and both James as well as Thompson had 13 points to round out the double-figure scorers for the Cavs, who only got five first half bench points. Four Clipper starters scored in double figures led by DeAndre Jordan’s first half double-double at 10 points and 11 rebounds. Chris Paul was the starter not in double figures, but he had six points and 11 assists on 1-8 shooting.

Both teams came out firing to start the third quarter, and Cleveland was able to take the lead back once again at 72-71. From that point on, LA went on an 11-2 run to take an 82-74 lead on the backs of Blake Griffin and DeAndre Jordan. At the 5:31 mark of the third, Head Coach David Blatt decided to instill the “Hack-a-Jordan” strategy, fouling Clippers Center DeAndre Jordan, who struggles at the free-throw line shooting just 40.2% this season. Fouled four times on four consecutive possessions, Jordan went 1-out-of-2 all four times and finished 4/8 before being replaced by Jamal Crawford; the Clipper lead only grew from three points to seven in that time. Trailing 82-91 after a pair of Crawford free throws, Cleveland was in danger of getting blown out on the road, but a timely Dellavedova three-pointer, a sweet and-1 opportunity by Irving, and a jumper by Thompson got the Cavs back within 93-90. Cleveland trailed 92-95 at the end of the third quarter.

Jamal Crawford scored the first of the fourth quarter to give the Clippers a five point lead which didn’t last long. From that point forward, LeBron James and Kyrie Irving simply took over, scoring the next 13 Cavalier points while holding the Clippers to just five points, giving them a 107-102 lead. After a Matt Barnes fast-break dunk, Cleveland used another run of 10-1 capped by a shot-clock beating, LeBron James three-pointer to take their largest lead of the game at 117-107 with 4:35 remaining in the game. James drew his fourth foul midway through the quarter, allowing Blake Griffin to be more aggressive on the block. Seven straight points from Griffin along with two more Crawford free-throws brought the Clippers within four points with under 2:48 left. Dellavedova and Crawford exchanged misses, but Irving continued his big scoring night with a 19-foot jumper at the end of the shot-clock buzzer to put the Cavs up six. On the ensuing possession, the Cavs got the defensive stop they wanted and Marion hit a baseline floater, but the basket was waved off and declared a shot-clock violation. Chris Paul hit a mid-range jumper and an immediate double-team forced the Cavaliers into a timeout. David Blatt drew up what seemed to be a play for James to inbound to Irving at the top of the key. That ended up being the decoy, as James found Thompson alone under the basket for a layup as he was fouled. James pointed towards Blatt to show his appreciation for the well-planned and executed play. In what should’ve been an easy finish, the game went on for another 10 minutes from that point on. In the end, Dellavedova knocked down his free throws to seal the victory for the Cavs at 126-121.

Kyrie Irving and LeBron James did an incredible job as they led the way tonight without the third member of the Big 3 in Kevin Love. Irving finished with 37 points on 12-18 from the field (5-8 on three-pointers) with four rebounds, five assists, and three steals. James had 32 points on 11-23 shooting, 11 rebounds, seven assists, and three assists. In the process, James eclipsed the 24,000 point mark tonight:

The Cavs needed someone to step up tonight and Tristan Thompson did just that as a starter. He finished his impressive and much-needed performance with a season-high 24 points, 12 rebounds, and two blocks on 10-12 shooting. Timofey Mozgov had 12 points and three rebounds. J.R. Smith had eight points, four assists, and three steals. The Cavs got 13 points from the bench, led by an important eight point, 5 assist game from Matthew Dellavedova.

Blake Griffin led his Los Angeles Clippers tonight with 34 points, 10 rebounds, and three assists. DeAndre Jordan had 19 points and 12 rebounds, Matt Barnes scored 17 points with eight rebounds, Chris Paul had 15 points and 14 assists, and J.J. Redick had 14 points to round out the Clippers’ starters. Jamal Crawford had 13 points and six assists while Spencer Hawes put in nine points.

Tonight’s game turned out to be pretty evenly matched when comparing the team statistics, but the Cavs shot the ball incredibly well tonight at 55.4%, including 10-23 (43.5%) from three-point land and better than the Clippers (47.3% and 10-29 on three-pointers. Cleveland won the rebounding battle 44-43, lost the assist battle 26-23, tied with LA in steals at nine, and had three blocks to the Clippers one. Cleveland did turn the ball over way too many times at 19 tonight, but the Clippers were unable to capitalize on them.

Cleveland finished a terrible start to the West Coast Road Trip with two key victories. Now that the Cavaliers now back above .500 at 21-20 and at the halfway mark of the season, they will get two days off on Saturday and Sunday before going back home to take on the division and conference rival Chicago Bulls on Monday night.