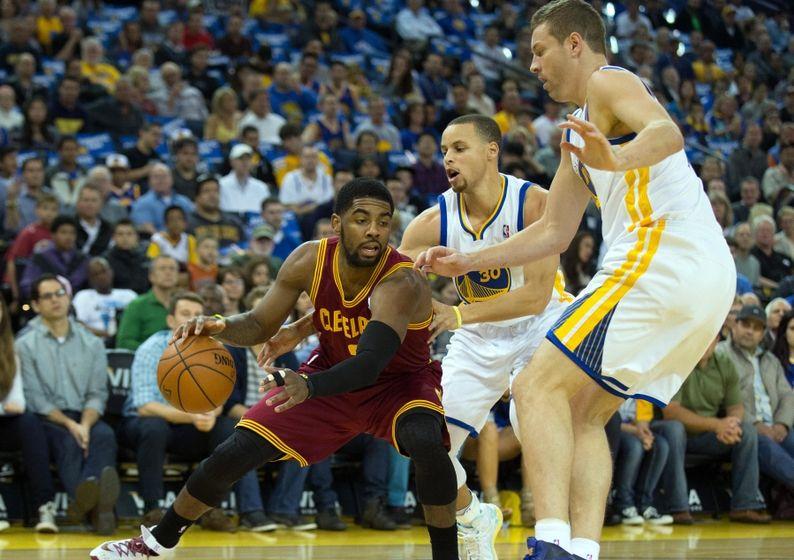 Timofey Mozgov’s performance during his physical was through the roof, literally:

The same could not be said for the Cavs performance on Friday night. In what was the first of a five game West Coast road trip, the league-best Golden State Warriors beat the shorthanded Cleveland Cavaliers 112-94 at Oracle Arena in Oakland. LeBron James sat for his seventh straight game, marking a career high in consecutive games missed. His previous most was in 2008 when he missed five straight games. The Cavs were also without Iman Shumpert (dislocated shoulder, 2-3 weeks), Anderson Varejao (Achilles tear, out for season) and Shawn Marion (hip, day-to-day).

Cavs newcomer J.R. Smith shined tonight with 27 points, after a forgettable debut last game when he was scoreless against the Houston Rockets. Timofey Mozgov, who Coach Blatt intended to start, couldn’t clear his physical in time, causing him to miss the morning shootaround and forcing him to come off the bench. However, he was the first substitute in the game for either team, and asserted his presence early, as he grabbed five rebounds (three offensive rebounds) in his first five minutes of action for the Cavs. He finished with nine points and eight rebounds in 27 minutes.

Head Coach David Blatt had this to say about their newest acquisition in Mozgov:

Mozgov's thoughts on Blatt, who coached him w/ Russian nat'l team: "He really brings the team together and makes the team want to play hard"

The Cavs started the game out strong, scoring 32 points in the first quarter against a top-tier defensive team that holds their opponents to a league-best 41.9% shooting. Despite their great play, they still struggled defensively, as Golden State scored 30 points in that first quarter, connected on four three pointers, and forced five Cavalier turnovers. J.R. Smith led the way with 12 points in the quarter.

What Would The East Look Like If The Playoffs Started Today?

Is Cleveland Back In The Championship Conversation?

The Cavs struggled to contain the perimeter, and it cost them. Stephen Curry and Klay Thompson were a combined 6/12 on three-pointers at the half. Again, the Cavs were without their three best perimeter defenders in Shawn Marion, Iman Shumpert and LeBron James. The Warriors took advantage of it, feasting on the Cavs with wide open perimeter shots. Surprisingly enough, Curry and Thompson missed on a lot of these wide open attempts.

The Warriors enjoyed a moderate lead throughout most of the game. By the fourth quarter, the Warriors’ lead had reached 11, with Stephen Curry and Klay Thompson scorching the Cavs with their deadly long range shooting. That lead was cut to five after a Cavs run sparked by tough three-pointers by Kyrie Irving and Kevin Love. That was closest it got however, as the Warriors quickly stretched the lead back to 11. It didn’t stop there though, as the lead ballooned to 16, and the Warriors ran away with the game.

Overall, the Cavs played well throughout most of the game, showing glimpses of what they could be capable of when fully healthy. The game was entertaining as both teams competed until the end, but the Warriors ultimately prevailed, keeping up their high offensive firepower, while the Cavs simply ran out of gas. J.R. Smith seemed to get too trigger happy down the stretch and despite a great start, finished flat. That being said, the Warriors are the best team in the league and to stay competitive with them on the road without four rotation players provides a glimmer of hope for what the Cavs can do at full strength.

The Cavs are now 19-18 and have fallen to the 6th spot with the Milwaukee Bucks winning tonight. Cleveland’s next game is Sunday night at the Sacramento Kings.