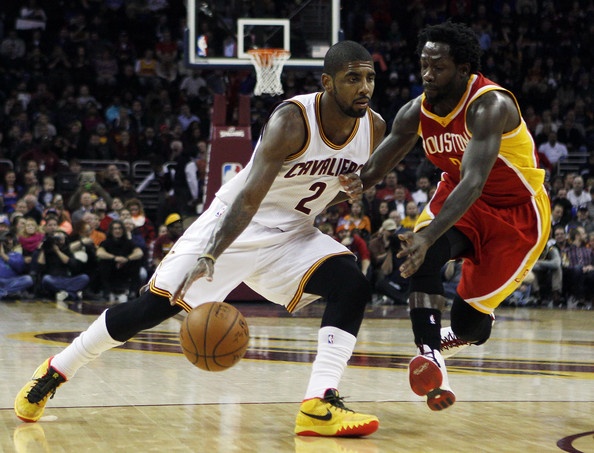 There was a lot of buzz surrounding tonight’s game as the 23-11 Houston Rockets entered the Q as one of the top teams in the NBA right now, and because J.R. Smith was making his debut as a Cavalier. Important news also surfaced just before tip-off, as the Cleveland Cavaliers sent a pair of first round picks that they acquired from Memphis and Oklahoma City to the Denver Nuggets for defensive-minded big man Timofey Mozgov. As far as the game went, the Cavaliers were overwhelmed by Houston’s ability to get the ball down low and dominate the paint at both ends of the floor. Here are the highlights for tonight’s matchup between the Rockets and Cavaliers:

Kyrie Irving was looking like his usual self after missing a game as he scored 23 of the team’s 48 first half points on 9-11 shooting from the field. He finished with 38 points on 15-26 shooting and was unquestionably the team’s MVP of the game, but struggled mightily in the fourth quarter, tallying just four points. It certainly was a tale of two halves for Kevin Love, as the star big man was 0-7 from the field in the first half, but was able to rebound in the second half tremendously to finish with 17 points and 16 rebounds.

Here’s a look at Irving’s spectacular ball-handling and ability to finish at the rim:

The Cavaliers were once again outmanned and outplayed in the post, as the Rockets trio of big men comprised of Josh Smith, Dwight Howard, and Donatas Motiejunas were able to score in the paint with ease as there was little resistance from Kevin Love and Tristan Thompson, who only had one block between both of them. The Cavaliers were out-rebounded 50-37 and dished 10 fewer assists than Houston. It was a debut to forget for the Cavaliers newly-acquired shooting guard J.R. Smith, as he went scoreless shooting 0-5 from the field. Two of his shots were half court attempts at the end of the quarter. In other news, newly acquired Cavaliers guard Iman Shumpert did not play tonight.

Here’s an alley-oop connection from Josh Smith to Dwight Howard:

Tonight wasn’t all bad for the Cavaliers, as news of acquiring defensive minded Timofey Mozgov can let some Cavs fans sleep at night. The Cavs are hoping Mozgov can make an impact right away for the abysmal inside defense that has Cleveland ranked 27th in the NBA. Welcome to The Land Timofey!

Here’s a sneak peak at what Mozgov brings to the Cavaliers: 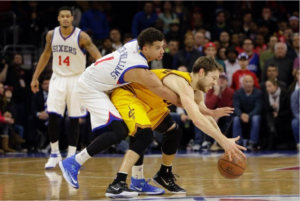