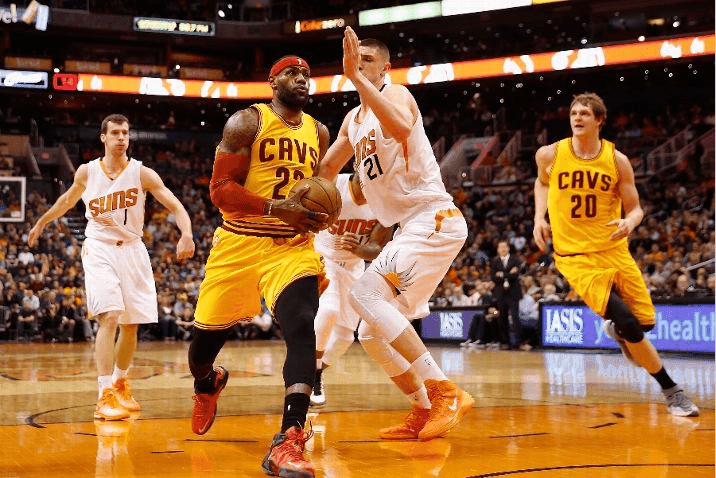 After missing seven games with a knee strain and sore back, LeBron James returns to the Cleveland Cavaliers’ lineup; just in time as the Cavs have been struggling lately, dropping to 19-19 in a poor stretch performance in the King’s absense.

I honestly don't know if this is a player problem or a coaching problem. Team is too talented to be this awful.

Markieff Morris looked like Chris Bosh in the first quarter, which could be attributed to the fact that Kevin Love was guarding him. Morris had 12 first quarter points, and Love continues to play lazy defense without being bothered to contest shots. Last game, against the Kings, it was Demarcus Cousins doing damage with his versatile scoring, but unlike this game, Mozgov was defending him, and defending him well. This game was almost a re-enactment of the Kings game, in which the Cavs trailed by 10 throughout most of the game. The score was 51-59 at halftime for the Suns, with LeBron James and J.R. Smith leading the way for the Cavs with 16 points and 14 points respectively.

Midway through the second quarter, LeBron was called for a questionable foul, which he contended. But what made this scenario interesting was that Coach Blatt also came over to the referee to argue the call. After a few words, LeBron pushes Blatt away back to the sideline, before resuming his discussion with the ref. Either it’s true that LeBron exudes no respect for his coach, or he wanted to prevent a technical foul call. Whatever the reason may be, it was an incident worth noting.

The 10 point Suns lead slowly turned into a 15 point Suns lead and eventually a 20 point Suns lead; another parallel with last game. Except unlike last game, J.R. Smith heated up with 3 straight three point attempts to bring the Cavs back to within 12. To close out the third, LeBron threw down a vicious slam, followed by an inbounding interception by J.R. Smith, who knocked down another three pointer to cut the lead to 6. By the end of the third, the score was cut to 85-79. J.R. Smith led the way with 29 third quarter points, but it was countered with Markieff Morris’ own 24 points, as he continued to scorch Kevin Love.

The Cavs carried their momentum into the fourth, with LeBron flipping the switch and bringing Cleveland within two, with a 16-2 run. Eventually the Cavs took the lead with a Tristan Thompson slam dunk. This Cavs team that earlier seemed disinterested in playing defense, now had the defensive intensity worthy of championship level contention; sparked by their comeback momentum and with LeBron playing the role of a defensive anchor. Love, who was a defensive liability with Morris having a career night, never played in the fourth; instead Thompson got the nod for his defensive abilities.

It was a back and forth game at that point, but eventually the Suns pulled away with a 6 point lead with a minute left to go. LeBron came up clutch with an and-one play, but P.J. Tucker grabbed a crucial offensive rebound for the Suns to hold onto the lead. The Cavs lost their ninth game in 11 contests, with a 107-100 loss to the Suns.

LeBron James poured in 33 points, and J.R. Smith had a season high 29 points. But Markieff Morris’ 33 points, a career-high, was too much for the Cavs. Kyrie Irving and Kevin Love both had quiet games, with 9 points each.