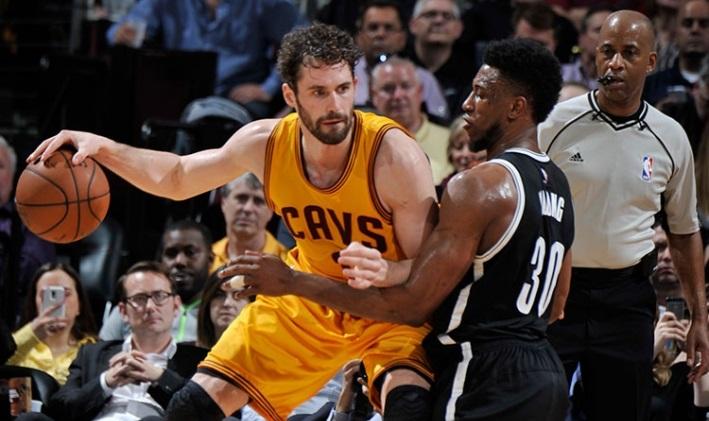 The Cavs shook off a sluggish start to dominate the Brooklyn Nets for a home win by the score of 107 to 87. After losing to the Nets just a week ago in embarrassing fashion, the Cavs were able to restore their pride with a convincing home win. The team was in synch on offense and dominant on defense for the vast majority of the game, and even though the Nets were playing without starting center Brook Lopez and point guard Jarrett Jack, this was still a strong performance by the Cavs heading into the home stretch of the regular season. LeBron James and Kevin Love each posted double-doubles tonight, with LeBron finishing with 24 points and 11 assists, and Love recorded 19 points and 10 rebounds. In the process tonight, LeBron James surpassed Dominique Wilkins for 12th place on the NBA All-Time scoring list.

After not making a shot for more than the first two minutes of the game, and only scoring 8 points in the first six minutes of the game, the Cavs were still able to find their rhythm and finish the first quarter leading 29-22. For the quarter, the Cavs shot 50% from the field, and assisted on all 9 of the made field goals. Channing Frye nailed two from long range to stretch the lead late in the quarter. For the period, Kevin Love scored 8 points and had 5 rebounds, and LeBron had 6 points and 5 of the 9 Cavalier assists. On the defensive side of the ball, the Cavs made it very difficult for the Nets, allowing just 37% shooting from the field and not allowing a 3-point field goal in the quarter.

The second quarter started with a 10-2 run by the Nets, but their momentum was short-lived as the Cavs quickly found their stride with the second unit and pulled away heading into the half. The Cavs stretched the lead while finishing the quarter on a 27-6 run. The lead at the half was 24, at 63-49. The defense was the catalyst for the Cavs’ offense, as the Nets were forced into difficult shots and turnovers for much of the second quarter. At the half, Love led the way with 16 points and 7 rebounds, while LeBron wasn’t far behind with 14 points and 8 assists. As a team the Cavs shot 51% from the field and assisted on 16 of their 20 made field goals in the first half.

The Cavs pulled away for good in the third quarter, leading at one point by as many as 28 points. The lead allowed Coach Tyronn Lue to sit tonight’s leaders in Love and LeBron, as well as Kyrie Irving and JR Smith, for the entire fourth quarter. The rest is valuable for multiple reasons, as the team will travel to Atlanta tonight to face the Hawks, and also because Irving and Smith each missed this morning’s shoot-around due to an illness.

After blowing a 19-point halftime lead against Houston two days ago, the Cavaliers maintained at least a 20-point lead throughout the second half tonight to finish off the Nets. Hopefully the extra rest that was bought for the starters helps the Cavs to another win tomorrow night.