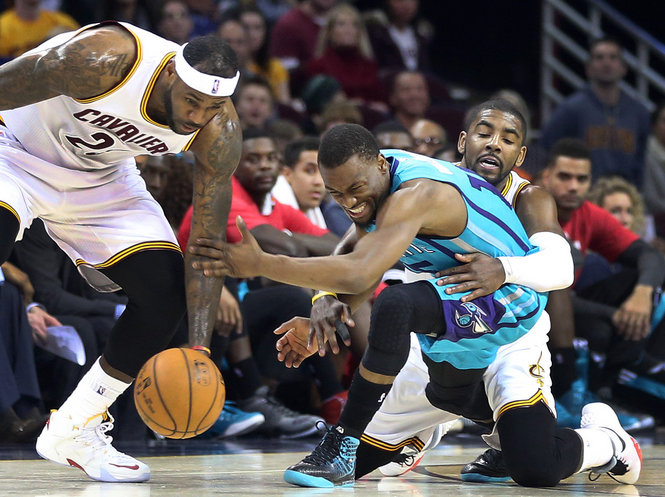 The Cleveland Cavaliers won their fifth straight game by dismantling the Charlotte Hornets at home tonight. It was the third and final meeting against the Hornets, who came in with a record of 18-25. Despite playing very well having won eight of their previous 10 games, Charlotte couldn’t get any easy baskets or knock down open shots. Credit the absolutely swarming Cavalier defense tonight, as Cleveland improved to 24-20 and seem to be on a roll with the whole team healthy (with the exception of Varejao). That’s right; recently acquired Iman Shumpert made his Cavalier debut tonight.

The Cavaliers swarming defense started from the opening tip, but the lockdown defense began after a Gerald Henderson dunk five minutes into the first quarter. With Cleveland up 14-9, the Cavs ran off 14 straight points in the midst of a 19-4 run to end the first quarter up 33-13. Once again, great ball movement led to open shots to get everybody involved.

It didn’t stop there as Cleveland continued their defensive as well as offensive onslaught in the second quarter, which was started by Shumpert‘s first Cavalier basket, a wing three-pointer, much to the delight of the Cavalier bench. A few minutes later, the Q blew up as the Cavs went on a 23-6 run to go up 68-29 with 4:22 left in the first half. Cleveland had 62 points with just under six minutes and were getting whatever they wanted on offense. From fast-breaks and three-pointers to flashy lobs while knocking down their free throws, it all started with the Cavs playing lockdown defense the way fans envisioned when they acquired Shumpert and Mozgov a few weeks ago. Among the incredible offensive display were the four steals and three blocks that led to those offensive opportunities. Here are some of the impressive plays from tonight’s game:

Cleveland outscored Charlotte 42-27 in the quarter. The half ended with the Cavs leading 75-40, a new season high for points scored in a half.

With the game out of hand, the Cavaliers continued their strong play against the Hornets, getting whatever they wanted offensively while still controlling the defensive side. The biggest surprise was Kyrie Irving getting his first career technical foul at the 8:37 mark of the third after getting the ball stripped by Kemba Walker.

It took 222 career games for Kyrie Irving to earn his first technical. David Blatt's streak is at 44 and counting.

In the final four minutes of the third, J.R. Smith knocked down four straight three-pointers without a miss to give the Cavs a 40 point lead at the end of 3 quarters.

The Cavalier starters didn’t see a minute of playing time in the fourth quarter as their work was done for the night. It was an excellent opportunity for the reserves to get some legitimate playing time to develop some kind of rhythm together. Matthew Dellavedova, Mike Miller, Iman Shumpert, James Jones, Joe Harris, and Brendan Haywood got to play meaningful minutes together tonight and held their own, defending fairly well by scoring 26 points in the fourth. The Cavs took their biggest lead at 49 points on a Joe Harris layup. Cleveland won by a final tally of 129-90 in an impressive blowout.

Four Cavaliers scored in double figures, all of them being starters with the exception of Kevin Love, who finished with nine points. It’s worth noting that no starter played more than 30 minutes, and LeBron James finished with a crazy line of 25 points, six rebounds, nine assists, and four steals in just 27 minutes tonight. More importantly however, every Cavalier scored tonight as the Cavaliers got 42 important points from the bench. After shooting a blistering 61% from the field in the first half, the Cavaliers got down to the 52% range, including 15-28 from the three-point line.

J.R. Smith knocked down seven three pointers as he continues his fiery shooting since joining the Cavaliers. Whether you want to call him TiMo, Mozzy, Mozilla, or the Wizard of Moz, Mozgov has become a vital contributor on both ends of the floor for the Cavaliers. Lastly, in his Cavalier debut, Iman Shumpert finished with eight points, two rebounds, and two assists, in 10 minutes off the bench.

Cleveland plays host to the Oklahoma City Thunder on national television Sunday afternoon on ABC. The Thunder, who just got over the .500 mark, come into Cleveland following a loss to the Eastern Conference leading Hawks.