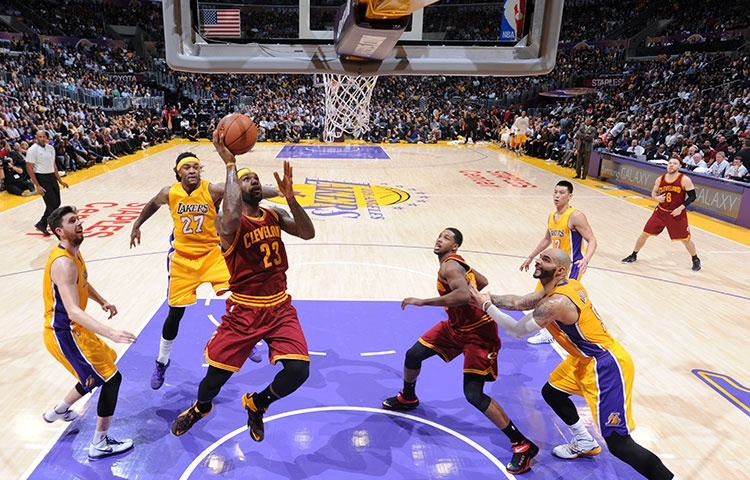 The Cleveland Cavaliers ended their six-game losing streak tonight by defeating the Los Angeles Lakers on the road, 109-102. LeBron James led the way in his second game back from injury with 35 points, heavily competing with Kobe Bryant’s 19 points and a career-high 17 assists. In what was a game of runs, Cleveland got the most important scoring runs and defensive stops to put the Lakers away down the stretch.

The Cavaliers got off to a strong start against the Lakers tonight, scoring the game’s first six points and taking an early 11-point lead at 17-6 just four minutes in. They made eight of their first 11 field goals for a blistering start, including two step-back three-pointers by J.R. Smith. The Cavs were slowed down the rest of the quarter however, missing their next seven shots as the Lakers went on a 13-2 run to take a 23-21 lead with 2:20 remaining in the first quarter. Both teams exchanged baskets the rest of the way and the quarter ended at a 30-30 tie. The starters for the Cavs scored all the points led by J.R. Smith with nine points. Kobe Bryant had a great first quarter for the Lakers, scoring seven points with three rebounds and eight assists.

The Lakers started the second quarter strong with an 8-2 run. LeBron James went to the line early in the quarter, but oddly enough, missed four straight free throws; if there was a positive in those misses, it was the Cavs getting into the bonus with 9:07 remaining in the quarter. Free throws were key in the midst of a 14-2 Cavalier run, helping them take the lead back at 46-42. After exchanging leads with Irving the next couple of possessions, the Lakers closed the quarter out on a 7-2 run to take a 61-57 halftime lead. Balanced scoring for the Cavs Big Three led them in the first half, as Kyrie Irving and Kevin Love had 14 points while LeBron James had 13 at half. J.R. Smith also had nine points. The Cavs had just three bench points at halftime while all five players scored off the Lakers’ bench and combined for 23 points. Kobe Bryant and Jordan Hill each had 12 points to lead the Lakers, and Bryant had three rebounds and 10 assists to round out his first half line.

Just as the third quarter began, it was announced that Love was suffering from back spasms, but he would try to play in the second half. Although Love started, he was moving very gingerly and really didn’t seem as mobile as he was in the first half. In what was a game of runs by both teams, the Cavs got the first punch in the second half, outscoring the Lakers 9-2 to start. After a Laker timeout, Kevin Love requested to be subbed out with the Cavs leading 70-69 after it was apparent his back spasms were too much to play with. Three minutes later however, Love walked up the bench to tell Coach Blatt he felt good enough to play and surprisingly returned to close out the third quarter for the Cavs. He didn’t do much however, as James scored seven of the final nine Cavalier points, including back-to-back three-pointers, as the Cavs took a 79-75 lead at the end of the third.

Kevin Love started the fourth quarter with a left wing three-pointer assisted by LeBron. James then followed it up with an incredible one-handed fade-away at the end of the shot clock along with two free-throws, and Matthew Dellavedova finished the 10-3 run off with a corner three-pointer to give the games an 89-78 lead with 9:11 to go. The Cavs were able to keep the lead at 11 until 100-89 despite Nick Young’s 4th quarter scoring. With a bad back throughout the game, Kevin Love took an important charge from Jeremy Lin during the run.

Gotta hand it to Love. Bad back and all, stands in to take a charge from Lin. Took 3 teammates to get him off the floor

After a couple of unwarranted isolation plays from the Cavs, Bryant hit a three-pointer and made two out of three free throws to get the Lakers within 103-99 with 43 seconds remaining. James shut the door on the Lakers on the ensuing possession with a nifty layup under the outstretched arms of Jordan Hill. With the game put away from the free-throw line, the Cleveland Cavaliers defeated the Los Angeles Lakers 109-102, ending their longest losing streak of the season at six games and pulling them to a 20-20 record.

LeBron James led the Cavaliers tonight with 36 points on 12-24 shooting, five rebounds, five assists, and two steals. Kyrie Irving scored 22 points to go along with two rebounds, and three assists, but also had five turnovers. Kevin Love played 37 minutes despite suffering from back spasms midway through the game, and finished with 17 points and seven rebounds. J.R. Smith was the final Cavalier in double figures with 14 points on 5-13 shooting. Timofey Mozgov had four points, 10 rebounds, and a block in 23 minutes. Tristan Thompson had five points and 11 rebounds, Shawn Marion also had 5, and Matthew Dellavedova was effective with six points in 11 minutes.

Jordan Hill led the Lakers in scoring tonight with 20 points and six rebounds, but it was Kobe Bryant who took charge of the Lakers’ squad, finishing with 19 points, six rebounds, and a career high 17 assists. Nick Young was the only other Laker in double figures with 14 points on 4-13 shooting. Ed Davis and Wesley Johnson had eight points apiece, and Ronnie Price had 5 points to round out the scoring for the starters. The Laker bench had 42 points on the night with some balanced, all-around scoring.
Although the Lakers (51.3%) shot better than the Cavaliers (46.8%), Cleveland shot 13 more free-throws, had five more offensive rebounds, and two less turnovers. A stunning statistic however, had Kobe Bryant having more assists tonight (17) than the entire Cavalier team (14).

In the pregame interview this morning, James talked this morning about playing against Kobe Bryant, saying that he knows every time they take the court is special, and that the chances us playing against one another are dwindling. He also acknowledged the way Kobe has been managing his aging in the league; he’s watching the way he’s preserving himself and taking notes for the future.

Here are two of the game’s absolute best engaging one another following the game:

Amid the constant coaching rumors and controversy, Head Coach David Blatt had this to say following the game:

Cavs coach David Blatt says he's not concerned about things written about him lately. "We're not out of the mud yet. But we're gonna be."

Cleveland, now with a record of 20-20, will play their 41st game of the season tomorrow night in the same arena (Staples Center) at the same time (10:30 PM EST), only they’ll be facing a much better Clipper team on ESPN. The Clippers are coming off an impressive road win against the Portland Trailblazers and have a 26-13 record. 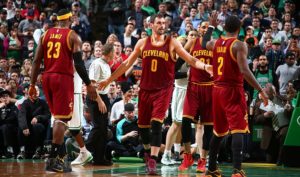