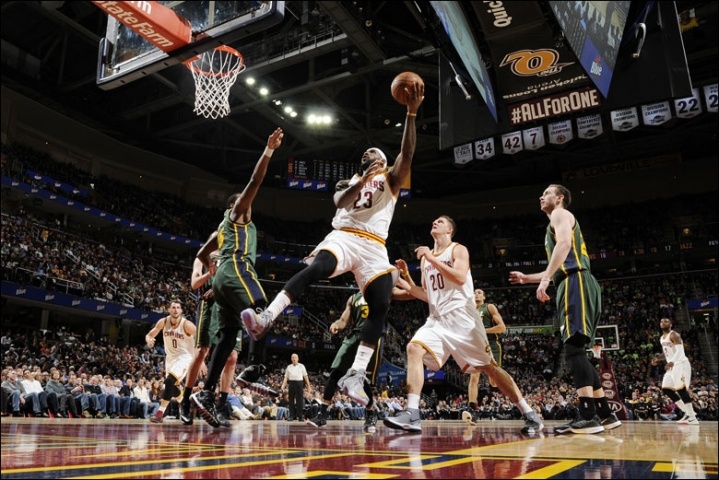 The Cleveland Cavaliers got their revenge tonight by defeating the Utah Jazz 106-92. All five starters scored in double-figures for the second consecutive game led by LeBron James and his 26 points. Jazz center Enes Kanter finished with 24 points and 17 rebounds in the loss. Utah defeated Cleveland back in early November on a Gordon Hayward buzzer-beating jumper from the wing. Cleveland was in the midst of a losing streak then, but it was a whole different story tonight. Cleveland came in having won three consecutive games while the Jazz had lost four of their last five games. Prior to the game, Shawn Marion had some news for the public:

New story: Shawn Marion will retire at the end of the season. Love says "hopefully we can end it in the right way" http://t.co/H7R2Ey23qA

All five of the Cavaliers’ starters scored in the first quarter tonight, which included an 18-4 run midway through the quarter to take the lead that would not be given up the rest of the night. Kevin Love and J.R. Smith scored 10 of those 18 points in the final three minutes of the quarter. The Cavalier defense was very solid in the first quarter, giving Jazz point guard Trey Burke all he could handle leading Utah’s offense. Utah’s lead at 17-16 on a Burke layup would end up being their last of the game. Thanks to the strong finish in the first, Cleveland led 31-20 after one quarter of play.

Defense was the Cavs’ calling card all night and the beginning of the second quarter showed that as Center Timofey Mozgov got a block and a steal in the first minute of the 2nd as Cleveland scored the first seven points to take a 38-20 lead. The 2nd quarter was all about the runs however, as Utah would step up offensively, going on a 13-4 run to get within nine points at 33-42. Cleveland answered back with a 10-1 run of their own to take an 18 point lead with a minute and a half left in the quarter. The Jazz finished the first half on a mini 6-1 run, giving the Cavs a 53-40 lead.

The Cavaliers essentially put the Jazz away in the third quarter, when they increased their 13-point halftime lead to 28 just nine minutes later using a 23-8 run that saw every Cavalier starter involved once again. The balanced effort displayed excellent passing from LeBron James and Kyrie Irving as well as great scoring ability by Kevin Love. Despite being down 28, Utah closed the third quarter out on a 12-4 run, cutting the lead to 20 after three quarters of play.

The start of the fourth quarter was a shootout, as both teams combined for 19 points in less than three minutes (10 from Utah, nine from Cleveland). The night seemed to be over for James and the starters after blowing out the Jazz through three quarters, but that wasn’t the case as the Jazz were able to get within 14 at 77-91 with just over eight minutes to go. James and Smith checked into the game, but Utah crept within 12 with just five minutes left in the game. Despite 14 points in the fourth from Kanter, the Cavalier lead would remain at the 14-16 range the rest of the way, and Cleveland eventually emerged victorious by a final tally of 106-92.

All five Cavalier starters scored in double figures tonight led by LeBron James’ 26 points, seven rebounds, nine assists, and four steals. Kevin Love had 19 points and 13 rebounds while displaying his defensive presence with two blocks and a steal. Kyrie Irving had 18 points, three rebounds, four assists, and five steals. Timofey Mozgov scored 16 points to go along with 11 rebounds and two blocks. J.R. Smith, who was the only starter to shoot less than 46% (Love was 7-15 from the field), still finished with a good line of 15 points, seven rebounds, three assists, and three steals. Tonight was the first time since 1985-86 that the Cavaliers had back-to-back games where their starters all scored at least 15 points.

The Cavs got little from their bench tonight, with six points from Shawn Marion, four points from Tristan Thompson, and two points from Matthew Dellavedova.

The Jazz were led by Enes Kanter tonight, who finished with 24 points and 17 rebounds. Gordon Hayward had 14 points, five rebounds, and four assists, while Derrick Favors was held to a single rebound to go along with his 12 points. Elijah Millsap had 12 points and Elliot Williams had 10 points off the Utah bench.

Cleveland shot 51.9% tonight despite shooting just 5-24 from the three-point line compared to 41.7% for the Jazz. Cleveland pulled down 45 rebounds and got a whopping 15 steals that surprisingly led to only 11 points off of those turnovers.

The Cavaliers next game is Friday night against the Charlotte Hornets at Quicken Loans Arena with a 7:30 PM EST start. The Cavaliers hope to have Iman Shumpert in the lineup for the first time since being acquired from the Knicks. 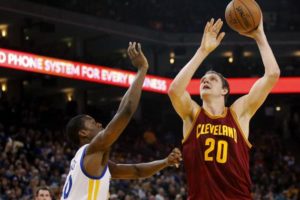 JUST IN: Could Mozgov Be The Best Cavaliers Center?
Related Topics