From One Champion To Another, LeBron James Offers Words Of Encouragement For Conor McGregor

In 2007 the San Antonio Spurs swept the Cleveland Cavaliers in the NBA finals. In June 2011, the Dallas Mavericks pulled the rug under the heavily favored Miami Heat after six games. In 2014, the Spurs schooled the Miami Heat in the finals, four games to one. Last year, the Cavaliers lost a draining, at least on their part, finals series to the Golden State Warriors.

Those were the conquests over LeBron James’ teams in nowhere else but the grandest stage. For all his historic accomplishments, the four-time Most Valuable Player is not spared from huge defeats.

That is why James was able to relate to mixed martial arts star Conor McGregor’s defeat at the hands, or arms, of Nate Diaz in the recently concluded UFC 196. In this FOX Sports Ohio video, the basketball icon had some words for the fighting phenom.

From one champion to another, James knows that McGregor is now faced with the great opportunity to become better than ever. A loss goes beyond the scorecard, or the emotional toll right after a match. A humbling defeat can make or break a person, but given the right frame of mind, it only gets better for the individual and that’s what separates champions from one another.

Echoing what LeBron James said, Conor McGregor will always be a champion. But that doesn’t mean things stop right at that level. 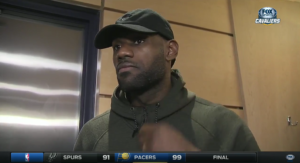