Forgiveness? How Ohioans Have Responded To LeBron’s Return 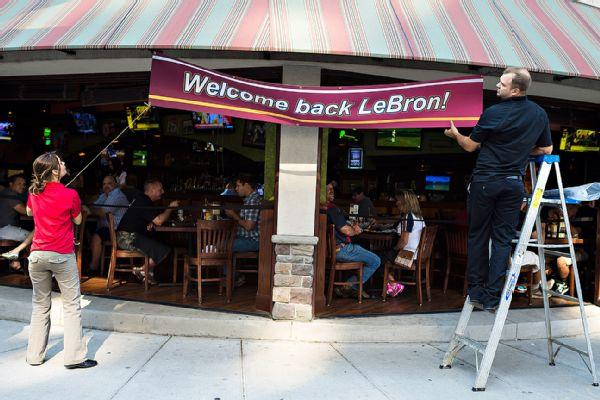 Just over four years ago, LeBron James made a decision that would affect not only himself and his new team, but also the entire NBA. “The Decision” to leave the Cleveland Cavaliers, a city just an hour north of his hometown of Akron, for the Miami Heat brought a lot of love and a lot of hate towards LeBron. Miami rejoiced at James’ decision to join Chris Bosh and Heat favorite Dwyane Wade on the mission to win championships. Talent poured into Miami, as everyone wanted to play with the newfound “Big 3” in James, Wade, and Bosh. But that was just the Miami side of things.

The city of Cleveland felt betrayed that their hero would leave them after promising them a championship. After all, Cleveland hadn’t won a championship in over 40 years at that point, and those words from James kept their hopes alive. After deciding to leave, everyone in Cleveland was furious as people started writing hateful posts about LeBron, fans infamously burned James’ jerseys, and the realization that James was actually gone kicked in when the “We Are All Witnesses” poster was taken down. Immediately following his decision, owner Dan Gilbert wrote an angry letter talking about LeBron’s decision in an attempt to keep the Cavaliers fans hopes up. Those efforts would be in vain as the Cavaliers entered one of their toughest stretches yet.

The year following LeBron’s decision to bolt for Miami, the Cavaliers put up an awful 19-63 record in 2010-2011. James was booed intensely in his first game back to Cleveland, but that only fueled him as he led his team to a blowout victory. The 2nd year without James was just a little better as the Cavs comprised a record of 21-45 (lockout season) with their Rookie of the Year from Duke, Kyrie Irving. Irving showed promise and became a playmaker that brought Cleveland into talks about possible playoff birth in a few years. Meanwhile LeBron was winning his first ring as a member of the Heat. The 2012-2013 was worse than the previous season percentage-wise for the Cavaliers as they ended with a record of 24-58. On the other hand James won his 2nd NBA championship with Miami, taking down San Antonio in a historic series that went to Game 7. Cleveland fans once again watched the King hold up a championship trophy for Miami. Despite James’ success with the Heat, Cleveland noticeably started to let go of any grudges they had on James as he was winning championships. They understood it was the best thing for his career. The 2013-2014 season had an improvement of 9 games as the Cavaliers were within reach of a playoff spot, but fell too far behind to catch up towards the end of the season. Cleveland fans this time watched as LeBron failed to lead his Heat to a 3rd straight title as Miami lost to San Antonio. The Miami loss further fueled the speculation about LeBron’s future.

{adinserter 2} It is now the summer of 2014 and after making it to the NBA Finals 4 straight times, winning 2 championships during the 2nd and 3rd years, LeBron James is once again the most coveted free agent in the NBA. Every team in the league is making their pitch to the King, regardless of their chances of actually landing him. Of course, in the months and days leading up to free agency, there were really only 2 teams in contention for James. The first would be the Miami Heat where his continued success and improvement of his overall game made Miami the favorites. The second would be the Cleveland Cavaliers, where he would return home and try to win a ring for the city as he promised years ago. LeBron did not make his decision right away, instead he opted to take his time and let his heart decide. He went on vacation; talked with family, friends, and former teammates. The longer he took to make his decision, the more people started thinking that James was considering going back home. Eventually, even sports writers and analysts were starting to believe he was going home. And then his decision was made.

Just like that, with an open letter published on Sports Illustrated titled “I’m Coming Home,” all was forgiven and forgotten four years ago. James spoke from the heart about his difficult decision to leave, how he always thought about home, about his looking forward to playing with his new teammates, and about how he has to be as a leader for all the kids in Cleveland. Cavs fans celebrated the return of their home-state hero by throwing parties, wearing James’ jerseys (some were partially burned), and crowding streets to show ESPN how much they were excited about the return of the King. After four grueling seasons, the Cavaliers once again had a chance to be on top of the East with a chance at a ring. LeBron will be able to coach and mentor the younger players to bring out the best of their abilities. The opportunities that lie ahead with LeBron James as leader will make all that has been said and done in the past, forgiven.