Coming full circle yet again, LeBron James pressed in his stamp on Cleveland sports history today after he became the first Cavalier to score 20,000 in franchise history. He recently moved up to 14th all time in NBA assists, continuing his untouchable resume as the most versatile player to ever play. He’s now the 15th player to give an NBA franchise over 20,000 points.

2. Tristan Thompson was player of the game.

Showing the biggest impact on court (+26) for the Cavaliers today, Tristan Thompson blew expectations away against the (albeit shorthanded) Thunder front court. The Cavs ended up matching Oklahoma City in points in the paint, an area where that the Thunder score the second highest percentage (46.7%) of their points in. He added on four blocks and four steals in this effort.

With a lucrative contract, continuous injury and consistency concerns, Shumpert’s future with Cleveland wasn’t the brightest this season. Since dropping 10 pounds in the offseason and overcoming nagging injuries, Shumpert has regained his defensive form while achieving career highs in field goal and three-point shooting. He’s still in the crosshairs if the Cavs consider a worthwhile deal, but in JR’s absence, Shumpert will have the opportunity to either cement his role in Cleveland or increase his stock elsewhere.

1. Picking a poison with Russell Westbrook

Fresh after ending a three-game winning streak, the Cavs face a test of exposure against the Thunder. With holes in perimeter and paint protection, the defending champs are sparing the Thunder as Russell Westbrook continues to exploit the vulnerable pick and roll defense. However, this was expected from a man who averages a triple double. Also expected is Westbrook’s issue with efficiency, to which we can credit Iman Shumpert for starting and matching Westbrook in playing time while holding him to 2-11 shooting, 0-4 on pull-up triples.

2. Figuring out pick and roll

With just five field goals outside the paint for Oklahoma City in the first half, the Cavs restricted the Thunder’s offense to their role players. Playmakers like Westbrook and Victor Oladipo have shot 6-26 while the Thunder front court combined for 10-17 despite not having Enes Kanter in the first half. The Cavs finally seem to be mastering the tradeoffs they’ve specifically struggled with in their last six losses.

LeBron James did become the first Cavalier ever to score 20,000 points for the franchise, but a large part to limiting Westbrook and defending pick and roll in the first half was Richard Jefferson. Coach Lue deployed a playoff tactic, going small with Jefferson to switch and avoid mismatches, similar to the Cavs’ approach against Golden State.

Richard Jefferson coming up big for the Cavs, +18 BPM in the first half (Leads both teams)

After breaking a three game losing streak with a 124-116 win against the Brooklyn Nets on Friday, the Cavaliers look to welcome the Oklahoma City Thunder, who are 28-19 and 6th in the Western Conference. The Thunder have won their last three games, with their most recent victory coming against the Dallas Mavericks in a 109-89 match on Thursday.

Offensively, the Thunder like the to score inside the paint. As a team, they average the second highest percent of their points there – 46.7% – for 49.7 points per game. When given the opportunity, they tend to push the ball in transition, netting 17.5 points per game off of fast breaks – third most in the league. They don’t rely heavily on shots from distance, as they have the second lowest three point percentage in the league. The Thunder have found success in drawing shooting fouls, as they attempt a second-most 25.8 free throws per game.

On defense, they’ve found production through rebounding, as they average the sixth most defensive rebounds per game – 34.3. They have also been rather efficient at preventing their opponents to score fast breaks points, as they allow only 11.0 per game – third best in the league. Inside the paint, while they excelled offensively, they give up a league-most 48.1 points per game. Even still, they have found success in defending shots within five feet of the basket, as they have held their opponents to the fifth lowest shooting percentage there.

Tipoff is set for 3:30 EST and will be broadcast on ABC. 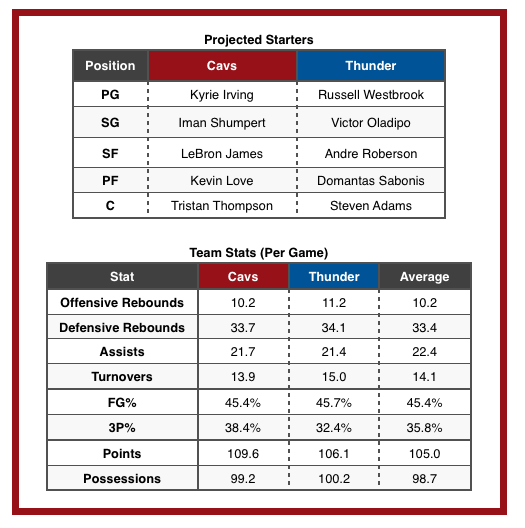 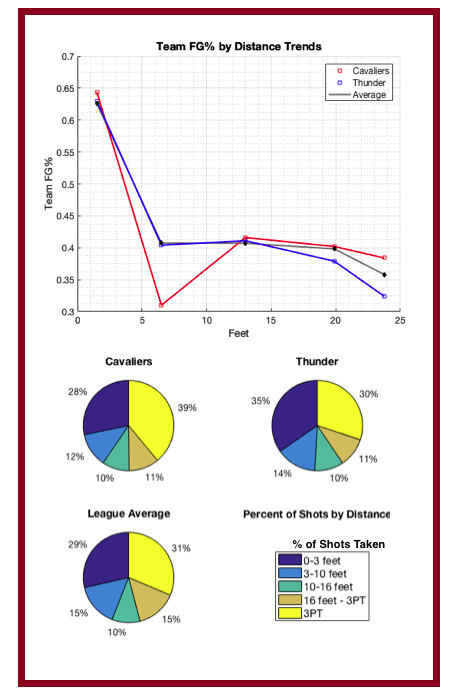 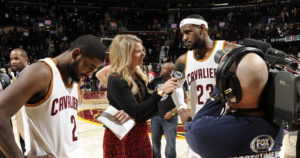