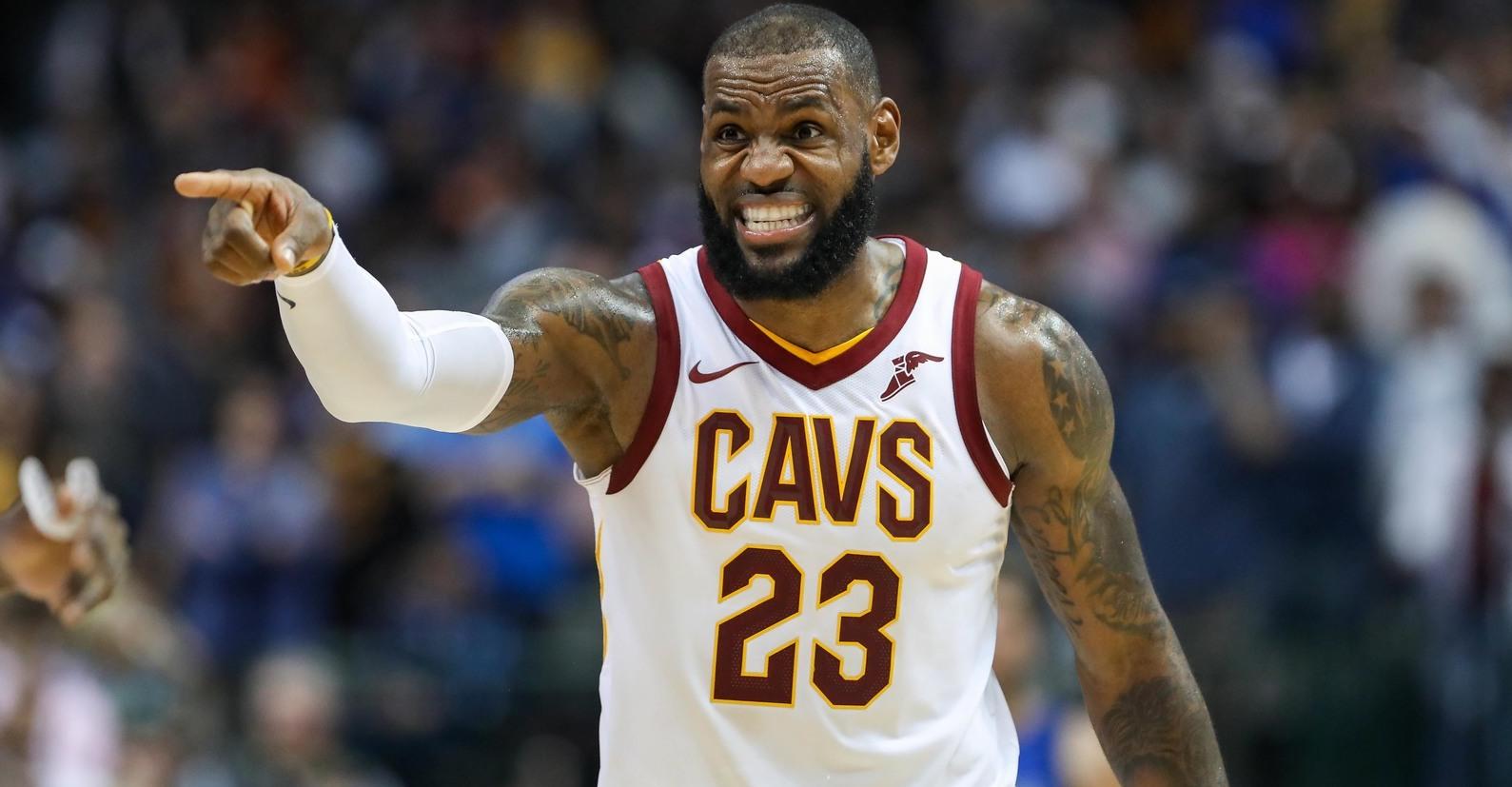 As previously mentioned, the Cleveland Cavaliers have two first-round draft picks in the 2018 NBA Draft, the Brooklyn Nets’ pick and their own pick. While many people are clamoring for the Cavs to trade the Nets pick to land a superstar like New Orleans Pelicans center DeMarcus Cousins, their own first round pick may be the most likely to be traded as it has been appearing in proposals for players like L.A. Clippers center DeAndre Jordan or Memphis Grizzlies star Marc Gasol.

But, in the event that they do retain their own draft pick, there are a few players that the Cavs should consider with their pick. As it stands, after their win against the Sacramento Kings, the Cavs would currently select twenty-seventh overall and players available at that position are not expected to be superstars or make an immediate impact on an NBA roster — although we’re keeping in mind exceptions to the rule such as Jimmy Butler, Draymond Green, or Isaiah Thomas.

While the Cavs may not be able to get a franchise cornerstone like they can with the Nets pick, they can certainly draft a player that can be helpful down the line as a key member of their bench rotation.

Without further ado, here are the five players the Cavs should consider with their own first-round pick in the 2018 NBA Draft.

The first player the Cavs should consider with their first-round draft selection is USC Trojans guard De’Anthony Melton. Melton is a true Swiss Army knife of a player that has shown tons of potential on the offensive and defensive side of the ball during his time in Los Angeles.

Melton’s biggest calling card is the fact that he is a freak on defense with collegiate career averages of 1.9 steals and 1.0 block. This is mostly due to the fact that he has a wingspan of 6’9” which allows him to lock down opposing players. The only problem is Melton becomes overly aggressive at times with career averages of 2.3 fouls per game and he will need to learn to properly balance his knack for defense while remaining out of foul trouble.

While he has shown tons of potential on the defensive side of the ball, Melton’s offensive game is still a work in progress. He only has averaged 8.3 points per game, but he is still able to contribute to his team’s offense with his passing ability as evidence by his career average of 3.5 assists per game. Thankfully, offense is able to be taught and developed but the fact that Melton is such a defensive freak is what will help him get picked towards the end of the first round.

For the Cavs, with Melton, they get a player who down the line can be a defensive specialist that can hopefully learn to contribute as well on offense. This makes sense because Melton has drawn comparisons to Avery Bradley due to his knack for defense alone. If Melton develops an offensive game, like Bradley did, he would be a key member of the Cavs’ rotation for the foreseeable future.

Coming into his freshman season with the Duke Blue Devils, Grayson Allen was expected to be a lights-out shooter and his most memorable game was in the 2015 National Championship game against the Wisconsin Badgers:

Now early-on in his senior season with the Blue Devils, he has fit the bill as a knockdown shooter with a collegiate career average of nearly 40 percent from beyond the arc. 3-point shooting is Allen’s bread and butter and because of this, he should really be considered by the Cavs with their own first-round draft pick.

He can be a bench scorer for the Cavs and thanks to all the attention players like LeBron James and Kevin Love receive, he can get plenty of wide open shots. He can also learn from players like Kyle Korver to fine-tune his shot to become an elite 3-point shooter in time.

The biggest knock on Allen’s’ game is the fact that he is a senior in college and what you see is what you get at this point. And at this point, it appears that Allen will be a 3-point specialist in the NBA that is a weak defender. This is by no means a bad thing but the fact that he is so weak on defense is what is keeping Allen from being a higher selection in the first round.

The NBA player that Grayson Allen best compares to is Joe Harris, a former draft pick of the Cavs who now plays for the Brooklyn Nets. Like Allen, Harris was a sizzling 3-point shooter heading into the NBA who has made his money with the Nets because of it. Harris also has a penchant for burning his former team so hopefully, the Cavs do not make the same mistake again.

Heading into the 2017-18 season, the Cavs appeared to be locked in with Isaiah Thomas (when he finally is healthy) as their starting point guard and Derrick Rose serving as his primary backup. But with 2017 almost at a close, Thomas is still mending and Rose has been away for quite some time. This point guard problem feels like call back to the 2016-17 season, where the Cavs did not have a consistent player to serve as the team’s backup point guard.

With their own first-round pick in the upcoming NBA Draft, the Cavs could take a serious look at Kansas point guard Devonte’ Graham. Graham has been huge for the Jayhawks this season and is an early front-runner for Big 12 Player of the Year. This is mostly because of his playmaking ability with season averages of 7.6 assists per game, and for the Cavs to have that coming off the bench for them would be huge.

Besides his playmaking ability, Graham is also an excellent shooter throughout his collegiate career with a 3-point shooting accuracy of 41.0 percent. This would be awesome for the Cavs as well who can always use some spacing from the point guard spot, something Rose cannot provide.

The biggest problem in Graham’s game is just the same as Allen’s with the fact that Graham is a senior at Kansas this season. This really puts him in a niche as a player but his amazing afore-mentioned attributes are what makes him worthy of a late first round draft selection.

Another player that is a project like USC guard De’Anthony Melton is forward Isaac Bonga who hails from Germany. The main reason Bonga is considered a project player is that he is the youngest player to make this list after only turning eighteen less than a month ago.

The reason why the Cavs would take Bonga though is the fact that they can get a player who has long-term potential, unlike players like Grayson Allen or Devonte Graham. One of the biggest thing that jumps off the page when looking at Bonga’s boxscores is the fact that he is a well-rounded player with respectable averages in points, rebounds, assists, and steals and the promising statistics can only improve

On offense, he is smooth in transition and a willing playmaker. Here are some of his highlights while he is playing professionally for Germany in EuroBasket:

Another huge plus to Bonga’s game is on the defensive side of the ball where he uses his lanky 6’11” wingspan to average 2.7 steals per game this season. The fact that he is averaging so many steals shows that he has a ton of potential to be a solid two-way player in the NBA.

The only thing that is holding Bonga back from being a true two-way player at the NBA level is the fact that he has no true perimeter shot at the moment. Thankfully for Bonga, he is young and can, in time, develop a reliable 3-point shot.

If drafted by the Cavs, fans should temper their immediate expectations with Isaac Bonga. The player he compares most to right now is Golden State Warriors sixth man Andre Iguodala due to the fact that he is an all-around player that will try to do anything possible to help his team win. Plus, like Iguodala, Bonga is also a shaky 3-point shooter. If properly developed by the Cavs’ system, whether in Cleveland or with the Canton Charge, Bonga could be special for the Cavs, especially for a late first-round pick.

To wrap things up, another player the Cavs should look at with their own first-round pick is Arizona shooting guard Allonzo Trier.

While playing at Arizona, Trier has so far showcased his ability as a scorer in a variety of ways by being able to get into the lane and attack the basket and also consistently hit jump shots outside of the paint too. The only problem is Trier’s 3-point shot is still a work in progress but he is slowly progressing towards being a decent 3-point shooter, allowing him to disrupt opposing defenses from any spot on the floor.

The major flaw for Trier is something he cannot prevent as he is a little undersized for his position at 6’4”. But thankfully for Trier, he plays past his small stature and really has been a vital part of Arizona’s offensive schemes.

The player Trier compares to most is Toronto Raptors guard Norman Powell. Like Trier, Powell is also a bit undersized but is able to score in a myriad of ways all while being a competent defender. Also like Powell, Trier should be brought along slowly if drafted by the Cavs so he can properly develop into a reliable bench option for them in the future.

In the end, the Cavs seem more likely than anything to trade their own first-round draft selection in the 2018 NBA Draft. In the event that they do keep their pick, they have plenty of options and should really consider players like De’Anthony Melton, Grayson Allen, Devonte’ Graham, Isaac Bonga, or Allonzo Trier.

All of these players would be homerun picks for a Cavaliers team that is devoid with young talent, and all of them, if developed properly in the Cavs’ system, can be key pieces in the rotation as they look to continue contending for the rest of LeBron James’ time with his hometown Cavs.