The Cleveland Cavaliers dismantled the Toronto Raptors in Game 1 of the Eastern Conference Finals last night. LeBron James and Kyrie Irving combined for 51 points on 22-30 shooting, and although the Cavs started out slow, they were able to go on a 15-0 run from the end of the first quarter to the start of the second quarter and essentially put the Raptors away by halftime.

The win was something that everyone expected as no one is giving the Raptors a chance to win a game, let alone the series. At halftime of Game 1, Orlando Magic guard Evan Fournier Took to Twitter the chime in on the Eastern Conference Finals.

The Raptors have 0 chance to win a single game man. Sorry 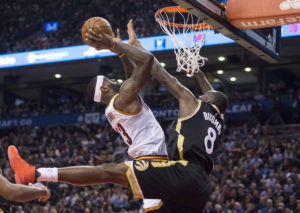 JUST IN: LeBron James Has No Idea What Warrants A Flagrant Foul Against His Defenders
Related TopicsCleveland CavaliersEvan FournierNBA PlayoffsToronto Raptors