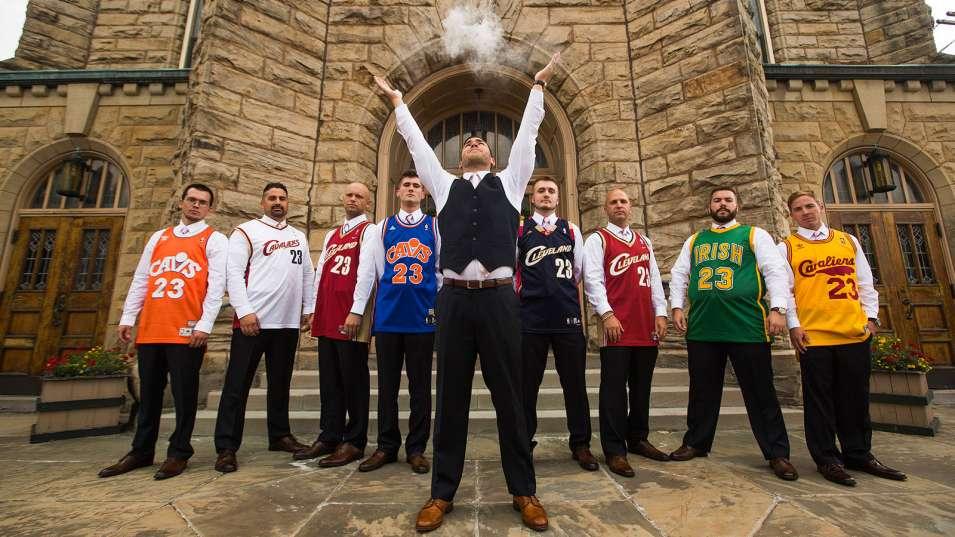 On July 12th, LeBron James signed a 2-year contract with the Cleveland Cavaliers returning to the Cavs after 4 long years. That day was a monumental occasion for Cavs fans and for Cleveland Nick Jones and Christa Deckard it was a very special day. For Nick and Christa not only was it a special day for them as Cavs fans but it was also the day of their wedding coincidently.

To celebrate LeBron’s return and their wedding, Nick took a photo with his fellow groomsmen all wearing LeBron’s jersey with Nick in the middle throwing powder in the air like Lebron’s pre game ritual.

“I quickly collected my jerseys and we got everything rolling,” Jones said according to MSN Fox Sports. “We pulled the photo off even better than I could expect.”

{adinserter 2} Of course before Nick posed for the viral photo, Nick asked Christa if he could and she obliged. Nick and Christa have been devoted Cavaliers fans and attended many games together before they got married. Now the couple are married with an exciting life and Cavaliers season awaiting.

“[The] wedding day really was the best day ever,” Jones said. “All this is just icing on the cake. LeBron coming home is the best thing that could possibly happen to Cleveland.”