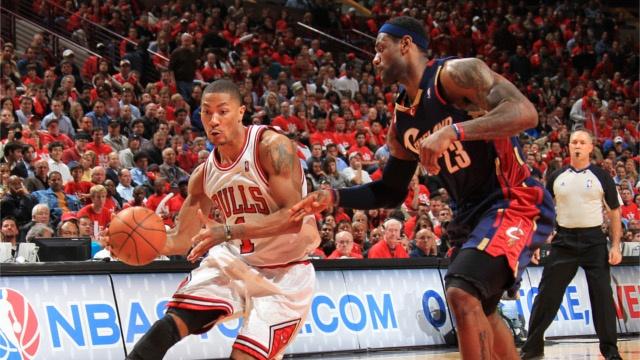 The race in the East has not been as exciting the past couple of seasons. That is about to change with all the trades, draftees, and free agent signings that occurred this past offseason. Here’s our Eastern Conference Projections for the 2014-15 season! Begin the countdown on the next page!

The city of Philadelphia is in for yet another losing season, this season quite possibly the worst in a long time. With the Sixers discussing a trade with Minnesota to swap Thaddeus Young ($9.1 million) for Anthony Bennett (5.5 million), assuming the Cavaliers and Wolves go through with the Kevin Love trade, Philly would not have anyone on their payroll earning more than Bennett. Simply put, the 76ers are tanking as much as they can to build up as much talent as possible before their players develop into stars or possible superstars. For now, expect the worst record in the East and maybe the NBA.

Marcus Smart or Rajon Rondo. The Celtics can’t have 2 point guards who can’t shoot outside of 15 feet. It just doesn’t make basketball sense. The Celtics seem to be committed to Avery Bradley, so they’ll likely have to trade Rondo or Smart. They may get some good players in return, but until then, the Celtics will be looking to get better and even farther ahead to the 2015 NBA Draft.

The Bucks went from a playoff team 2 years ago to the worst team in the NBA last year. They look poised for another draft lottery even with the number 2 pick Jabari Parker teaming up with Brandon Knight in the backcourt and Giannis Antetokounmpo, John Henson, and Larry Sanders in the frontcourt. They do have a new head coach in Jason Kidd, but he’s yet to prove that he can get a team to believe in his system.

Besides the questionable 2 year, $9 million deal they signed with struggling Ben Gordon, the Magic had a good offseason. They were in the process of rebuilding last season and that will continue into the 2014-15 season. They drafted Aaron Gordon and Elfrid Payton to compliment Nik Vucevic, Tobias Harris, and Victor Oladipo. They did get rid of their only veteran in Arron Afflalo, but they’ll be working on team chemistry and experience as they play for success in the seasons to come.

The Pistons probably slightly overpaid for the services of Jodie Meeks, but the more surprising issues is their inability to get rid of Josh Smith and sign Greg Monroe. As long as the Pistons have Smith as their starting small forward, the front court will be too crowded for both Monroe and Andre Drummond. Smith is a natural power forward, so if he’s not the one going, it has to be Monroe. Other than their front court troubles, the Pistons could make the playoffs led by Brandon Jennings and D.J. Augustin. For now, Detroit is lottery bound in the 2014-15 season.

The Nets had quite the terrible offseason in my opinion. They lost out on one of their best players in lanky point guard Shaun Livingston and forward Andray Blatche, before deciding they won’t match Washington’s offer for Paul Pierce. Losing some of their younger guys, the Nets are an older team and who knows if they can even make the playoffs next year. They’ll get Brook Lopez back from a foot injury, but he’s been injury prone. Unless Deron Williams can rediscover his game from his Utah’s days, don’t look for the Nets to make the playoffs next season.

The Pacers looked as if they would be the best team in the East in 2014-15 prior to the start of the summer. First Lance Stephenson went to Charlotte, then Paul George went down with a gruesome injury, and all of a sudden, the future isn’t so bright for Indiana. David West, Roy Hibbert, and George Hill will have to be huge leaders on this Pacer team as George is slated to miss the entire season. The Pacers probably wish they could skip this season and go right to the next as it won’t be too good for them unless they can make some effective trades.

After a disastrous season in 2013-14, the New York Knicks won the offseason when they were able to retain Carmelo Anthony and sign Derek Fisher as their new head coach. The Knicks know they’re not going to win a championship in the 2014-15 season, but they’re going to get better. They have a couple of young guys on the team who can be decent compliments to Anthony, but they’ll need Amar’e Stoudemire and J.R. Smith to play the way they were expected to when they signed those big contracts if they want to make any noise in the playoffs.

The Hawks somehow went from easily-favored to a game 7 in last year’s playoffs, and were even up 3-2 with a chance to close the Pacers out at home. The Hawks should be even better than they (somehow) were last season with center Al Horford returning from injury, the improvement of Paul Millsap, Kyle Korver, Jeff Teague, and the signing of Thabo Sefolosha, Kent Bazemore and newly drafted Adreian Payne.

Owner Michael Jordan has his team with a bright future ahead of them. Having drafted Noah Vonleh and signing Lance Stephenson and Marvin Williams, the Hornets of Charlotte look like a playoff ready team this season. During the playoff series against the Heat, Al Jefferson suffered a foot injury that greatly hampered his ability to be effective on the court, and with his inability came Charlotte’s downfall at the hands of the back-to-back champs (at the time). The Hornets have a solid unit in Kemba Walker, Lance Stephenson, Michael-Kidd Gilchrist, Marvin Williams, and Jefferson, but there are still questions about how they’ll fair against Chicago or Miami.

Toronto arrowly lost their series to the Brooklyn Nets last season in Game 7. After the Rudy Gay trade, the Raptors flourished under head coach Dwane Casey and first time All Star DeMar DeRozan. Having resigned Kyle Lowry, the Raptors are looking to make a deeper push for the playoffs as they bring back an experienced team who will collectively do all the right things for the sake of the team.

Washington made Indiana work for their 6 game series victory in the 2nd round of last year’s playoffs. Ultimately Indiana figured them out, but the Wizards were impressive nonetheless. The young core of John Wall and Bradley Beal can only get better. They have lost standout defender Trevor Ariza, but later acquired Paul Pierce and resigned Marcin Gortat. Washington is on the verge of a deep playoff run, but they’re ranked 4th because of the increased talent that’s been brought over to the Eastern Conference.

The Heat have also made some big moves and remained contenders in the Eastern Conference with their highly revamped roster following LeBron James’ return to Cleveland. They’ve drafted Shabazz Napier, resigned Dwyane Wade, Chris Bosh, Udonis Haslem, Mario Chalmers, and Chris Andersen, as well as signed Danny Granger, Josh McRoberts, Luol Deng, James Ennis, Shawne Williams, and Reggie Williams. Although they have a Big 3 in Wade, Bosh, and Deng, the Heat have become a more complete team overall this offseason as they’re fairly loaded in most positions.

Chicago has made some of the biggest splashes the NBA has seen this past offseason. They couldn’t convince Carmelo Anthony to play there and James went back to Cleveland. However, the Bulls were able to bring in proven center Pau Gasol, European star Nikola Mirotic, and draft shooter Doug McDermott all while keeping their defensive stalwart Taj Gibson as well as getting their All-Star point guard back in Derrick Rose. Look for the Bulls to keep playing that tenacious defensive brand of basketball they’re known for under Coach Tom Thibodeau as they once again hope to remain healthy and make a push for the playoffs and possibly NBA Finals.

The Cleveland Cavaliers have their King once again. LeBron James made his return to his home-state of Ohio and although inexperienced, the Cleveland Cavaliers are looking to play for Championships for years to come. LeBron will lead Kyrie Irving, Dion Waiters, and Tristan Thompson into becoming elite players on a possible championship team. We’ve seen what having LeBron does when you have shooters in Mike Miller and James Jones on the floor, so expect a lot of kick outs to 3 balls. It’s hard to give up the highly praised and full of potential Andrew Wiggins, but it’s also hard not to say yes to an All-Star big man who averages 26 points and 13 rebounds in Kevin Love. Look for the Cavs to compete for the top spot in the East with the division rival Bulls.