Cleveland Cavalierspoint guard Kyrie Irving has developed one of the best point guards in the NBA over his last couple of seasons in the NBA, and the league as especially taken note of him being one of the top finishers at the basket. NBA players have taken notice, including Chicago Bulls‘ star Dwyane Wade.

During a Twitter Q&A, Wade was asked who the better was at the rim, and he had no problem naming Uncle Drew the winner of that battle.

As LeBron James‘ former star teammate and best friend, Wade has always been one of the best finishers around the basket with his array of post moves and up-and-unders. Irving is different as a finisher, getting crafty with the contested attempts and somehow incredibly difficult shots in the basket.

In addition to that, Wade asked if he thinks James likes to play with himself or Irving more, and he gave a pretty good answer.

I think he likes and liked playing with us both. It doesn't have to be one over the other. He loves playing with good players period. https://t.co/HlV8PJFWyD 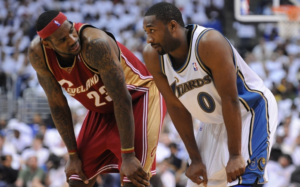