Down But Not Out: Banged Up Cavs’ Big Three Expected To Play Wednesday vs. Brooklyn Nets 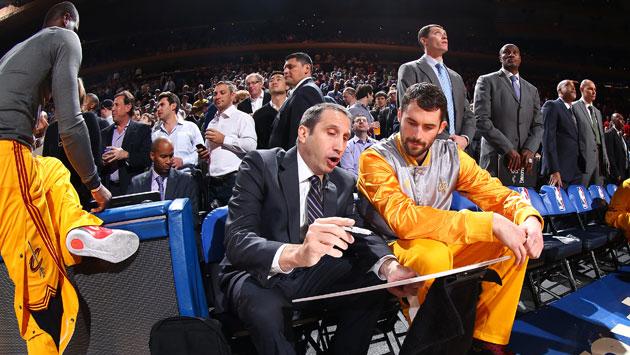 Kevin Love sat out the past two games with what many are speculating to be his recurring back spasms and tightness. He recently came out and said it’s something he’s been dealing with since November, but the Cavs are maintaining that they’re resting Love for just that: rest.

With the playoffs looming, teams like the Hawks, Warriors, and Grizzlies are starting to rest their starters more often, and Love’s case in Cleveland seems no different as he prepares for his first ever playoff series with the Cavs. A big help in the schedule is that the Cavs don’t have a back-to-back set until the end of the season in mid-April. Blatt talked about resting his stars:

“So we’re thinking about that,” Blatt continued. “Where and if there is an opportunity to rest guys, we will.”

Turner Sports reports that Kyrie Irving, who has been relatively healthy this season with the exception of minor injuries, suffered a minor injury to his quad during Monday’s game against the Heat. The Cavs don’t play until Wednesday, and the coaching staff isn’t overly worried about it, so Irving should be good to go for Wednesday’s game.

LeBron James has been dealing with knee and back soreness since late December and a sore wrist since late January. In the loss to the Heat Monday night, he also jammed his wrist during a collision with Heat center Hassan Whiteside. Despite Blatt’s comments that they need the number one seed, James, Blatt and the coaching staff are definitely valuing health over seeding:

“The coaching staff, if that’s what they want, but for me, I never play for seeding. I just play,” said James. “And wherever at the end of the season we land, I’m ready. Just get me in the playoffs. Get me in the playoffs, I feel like I can win on anybody’s floor. I feel like I can win at home. I’m that confident in my ability and our team’s ability. So I’ve never in my 12-year career played for seeding. That’s just not how I work.”

James as a player has his team’s goals in mind and Blatt, despite his denying it, is really looking at the big picture for the Cavs as teams position themselves for the playoffs. Eight of the final 13 games for the Cavaliers are at home, and only five are against teams above .500, those being the Milwaukee Bucks twice, Memphis Grizzlies , Chicago Bulls, and Washington Wizards.