Do The Cavs Need Kevin Love To Win It All? 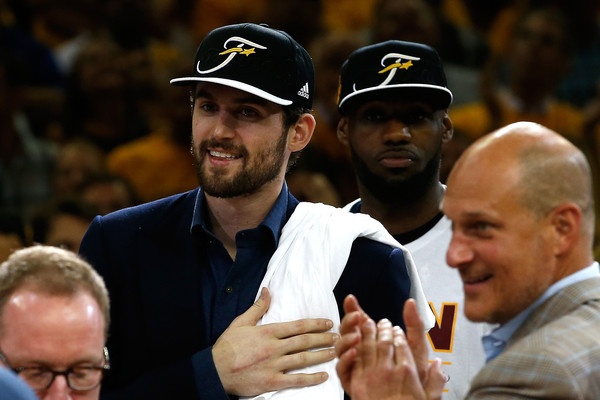 In October we all had visions of the Cavaliers winning an NBA title with the big 3 hoisting the Larry O’Brien trophy on stage. Boy, has that vision changed. Not because the Cavs title hopes have diminished, but because Kevin Love will not be involved throughout the late title run. Love suffered a dislocated shoulder in the first round vs. the Boston Celtics. When the injury occurred it seemed as a huge blow to the Cavs title chances. Since then Cleveland has rolled through the Eastern Conference. This may have seemed like a crazy question not too long ago, now not so much; do the Cavs really need Kevin Love to win?

A huge reason for this question even coming up is Tristan Thompson. Double T. has stepped up tremendously throughout Love’s absence and been an absolute force on the boards. Thompson turned down an extension from the Cavs earlier in the year, essentially betting on his play. It is pretty obvious he made the correct choice. Tristan is in for a huge payday this summer. It would be silly for the Cavs front office to let the Texas product walk. But is it really a good idea to pay your starting power forward max money and your backup power forward near max money? It’s a decision the Cavs will have to make.

In the playoffs Thompson is averaging 8.8 points and 10 rebounds, 4 of them offensive. His effect on the games throughout the postseason has been larger than the numbers. TT holds down the paint defensively and creates extra possessions for the scorers. The Cavs have been able to win without Love in the second and third round. If the Cavs move past Atlanta into the Finals, Love’s absence will be felt. K. Love brings attributes that Thompson just can’t. One is his ability to spread the floor. Thompson poses no threat from the mid-range to three-point line; he usually camps in the paint. By doing this he keeps his defender down there, not allowing LeBron James and Kyrie Irving to attack the rim as effectively. With Love stretched out on the three-point line, his man must stay near him opening up the lane for slashing teammates. When the defense decides to give Love more room to protect the paint from LeBron or Kyrie, they can kick it to Kevin for a clean look at a three pointer. Love was very effective from deep this season shooting 36% and making nearly 2 per game. These are impressive numbers for a big man who hits the boards as hard as Love does. He led the team in rebounding this season. Although his defense isn’t terrific, he has improved on that end of the floor and also hustles for loose balls.

Another thing to look at is team chemistry. Is Kevin Love really a good fit for the Cavs? The answer is yes. He is a very good compliment to LeBron and Kyrie’s games. He may not be a 1st or 2nd option but that is just something he will have to accept if he wants to win a title. Him fitting in is all his choice; he must accept his role for the betterment of the team. This is something Tristan Thompson has done all season. Thompson, LeBron, and Kyrie seemed to be pretty good friends. But that doesn’t mean that Love and the others aren’t friends. Like Kevin said earlier in the season, LeBron isn’t his best friend nor does he need to be. As long as the big three can coexist on the basketball court in a winning fashion, it doesn’t matter if they are good friends.

Kevin Love can opt out this summer and become a free agent. Tristan Thompson will also be a free agent but restricted, meaning the Cavs can match any offer made to him. Love has said all year that Cleveland is where he wants to be despite constant drama surrounding him. I fully expect both to be wearing wine and gold next season. It is definitely possible that the Cavs win a title this season without Kevin Love, but it would be a lot easier with him. And in a talented and evolving NBA, the Cleveland Cavaliers will need Kevin Love in order to win for years to come. 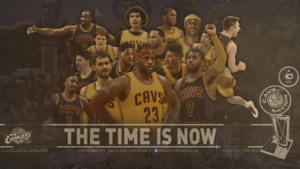 JUST IN: The Ups And Downs That Have Led Cleveland To The 2015 NBA Finals
Related TopicsCleveland CavaliersInjuryKevin LoveNBA Playoffs