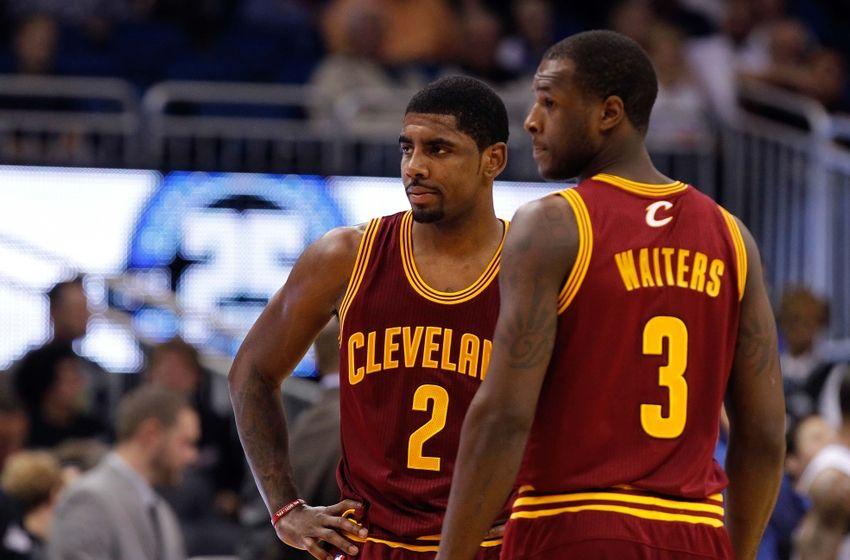 We all know how much talent Kyrie Irving possesses as a point guard. It was on full display during the FIBA tournament in Spain, where he snagged MVP honors in a stellar performance during the gold medal matchup. Couple that with the Cavs’ acquisition of Kevin Love and Lebron James, and we have a scenario where Waiters, who may have already been underrated, will get overlooked even more.

Is there a way to get Dion more involved, in the midst of this Big 3 formation? What if we were to reverse Kyrie and Dion’s positions; that is, have Irving play the shooting guard, and Waiters slide up to the point guard role. Sound crazy? Hear this out.

For starters, Dion is 6’3”, which is slightly undersized for the 2-guard spot. This sort of disadvantage is noticeable on the defensive end of the floor, where Waiters has had his fair share of struggles as a wing defender. Looking at Waiters’ defensive rating, which is a measure of how many stops a player gets individually per 100 possessions, we can see that he logged a rating of 110 during the 2013-14 season (lower is better).

To put it frankly, this ranks as among the worst in the league. For a comparison, the worst defensive rating at the SG position was registered to Evan Fournier of the Denver Nuggets (111). Among the best defensive ratings at the same position are Jimmy Butler (100), Lance Stevenson (100), and Danny Green (101).

That doesn’t exactly mean that Waiters is one of the worst defenders; in fact, he’s actually quite average as a defender (as we’ll soon see). The problem lies in his inability to become the defensive anchor, or display a noticeable contribution on defense that can drastically affect the game. He just doesn’t get nearly as many stops as often as other good defenders do.

Let’s take a look at another defensive statistic, namely, the average opponent PER against Waiters. Playing at the 2-guard spot, Waiters has held his man to a 14.2 PER on average. As the league average PER is 15, we can see that this is slightly above average. He also registers a 15.2 PER rating himself, yielding a +1.0 production at that position.

What about while playing point guard? Waiters has held his point guard opponents to a 10.6 PER, while reaching an above average 16.0 PER himself, for a +5.8 production at the point guard spot. Not too shabby. In fact, that 10.6 Opponent PER is top in the league. You can thank Waiters’ bulk for that.

Oh, and as a side note, Kyrie Irving’s opponent PER averages out at 17.8 in comparison. That’s a 7.2 PER edge that Waiters holds defensively, at point guard, over Irving! Let me clarify again: Waiters is a top-of-the-line point guard defender, while Kyrie is a very below-average point guard defender.

By now, you’re probably thinking, “Hey, Irving is shorter than Waiters, and doesn’t play as much defense, why slide him up to shooting guard?” Well, to answer that, there are a LOT more great point guards than there are shooting guards. In case you haven’t noticed, Demar Derozan is probably the 4th best shooting guard. And the list gets noticeably dryer after that. Have Irving guard the 2 spot is probably a lot less riskier than having him try to guard a golden era of elite, next-level point guards. Would you rather have both Waiters and Irving struggle at both their positions, or just one of them?

So what do you guys think? Even now, many people would agree that Kyrie is “a shooting guard, in a point guard’s body.” In a halftime interview, Irving once said “If I pass the ball, the ball magically gets back to me.” To me, that just sounds like Irving’s main motivation for passing the ball is to get it back within the flow of ball movement. He doesn’t look to get his teammates involved, so much as he looks to score. Waiters, however, looks to dish the ball to an open teammate after he drives to the rim and attracts the help defense and/or double team. Irving would, most times, look to get through the help defense, via a razzle-dazzle display of dribble moves and tops it off with a tough layup. It’s pretty, but not always the best basketball decision, especially for the team of our caliber this season.

Overall, I think this kind of change-up in the rotation is for the better; the Cavs’ Big 3 can flourish, and Dion can get better involved in the offense. It also helps defensively. Hey, if this thing works out, I’d like Dan Gilbert’s consideration for a coaching job. Hah, just kidding. Maybe.