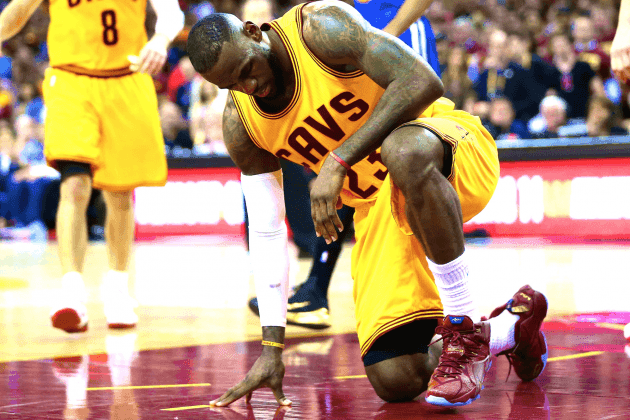 The Cleveland Cavaliers came into the NBA Finals beyond shorthanded having lost their starting power forward in Kevin Love to a season-ending shoulder injury from the first round of the playoffs.

In addition to that, Kyrie Irving was constantly bothered by tendinitis in his left knee, but was reportedly feeling good enough going into his first NBA Finals. We all know what happened after that when Irving fractured his kneecap when Klay Thompson collided with him, effectively ending his season and any basketball activities for the next 3-4 months.

RELATED: LeBron James On Game 5, Looks Ahead To Game 6

In the second year that the NBA has implemented the 2-2-1-1-1 format for the Finals, the Cavs and Warriors matchup looked like it could be one for the ages despite the injuries thanks to one current MVP in Stephen Curry and one four-time former MVP in LeBron James.

The Cavs were able to withstand a pair of fourth quarter runs by the Warriors in Games 2 and 3 to get two of the four necessary wins. Unfortunately, LeBron and the Cavs were clearly fatigued in the fourth quarters, and it was evident in all three losses as the Warriors simply outran and outplayed them down the stretch. After the Game 4 loss, head coach David Blatt thought his guys were clearly tired.

“Tonight was the third game in five days, including the trip back from the West Coast, and it seemed to have an impact on us, yes.”

Blatt has been playing a short, seven-man rotation that includes Delly, Shumpert, James, Thompson, and Mozgov as the starters with James Jones and J.R. Smith coming off the bench. He’s also played Mike Miller sparingly, mostly due to his being a defensive liability.

RELATED: 5 Cavs Who Need To Step Up Their Games To Avoid Elimination

LeBron James spoke with members of the media after the Cavs loss in Game 4 and tried not to say too much about it, but clearly hinted at the issue with the 2-2-1-1-1 format as the team with home-court advantage also had another advantage.

“The schedule is what it is. We knew that coming into the series. We knew it was going to be every other day when we got home, and those guys were going to have two days in between when they went home. But I think defensively we were still very good. Offensively we were terrible. You can’t always… you can’t always bank on your offense. Sometimes your offense just doesn’t show up, and there is no way we go 4‑for‑27 from the three‑point line and expect to win.”

When you look at the Cavs, it’s easy to say that they’ve been shorthanded and that the Warriors have been the better team. But all season, the Cavs have dealt with adversity and came out on top. The glaring fact when you look at the NBA schedule for this NBA Finals is that the Golden State Warriors will have had at least two days off before every single home game, including a full seven days before Game 1.

Now, sure, this can come off like some measly excuse since it also means that the Cavs also have those two days off, but every single game back at Quicken Loans Arena has been and will be after just a single day off. What’s worse? That single day off is the teams’ travel day from the West Coast to the East, meaning Cleveland can’t afford a day of rest at home before coming out more energized before the home crowd like the Warriors can.

In games where the Cavs have had 2 days off in the regular season, they are 13-0 scoring 110.4 points per game as opposed to 26-18 with just one day off and putting up an average of 100.8 points per game. But even more important than the points and is the rest the Cavs players could get at home with a shorthanded rotation.

LeBron James and Matthew Dellavedova have dealt with cramps for half of the series. Iman Shumpert has been dealing with a strained groin. Tristan Thompson and Timofey Mozgov have been banging bodies down low all series. And J.R. Smith cannot buy a bucket for four quarters in a row.

Now that the Cavs backs are against the walls and facing elimination for the first time this postseason, they’ll have less than a day to recover for Game 6 back at the Q after traveling back home. It’s do or die now, win and force a Game 7 or lose and go home for what will be a very long summer in the city of Cleveland, state of Ohio, and for Cavs fans worldwide.