Did Kyrie Irving Play Too Many Minutes In Game 1? 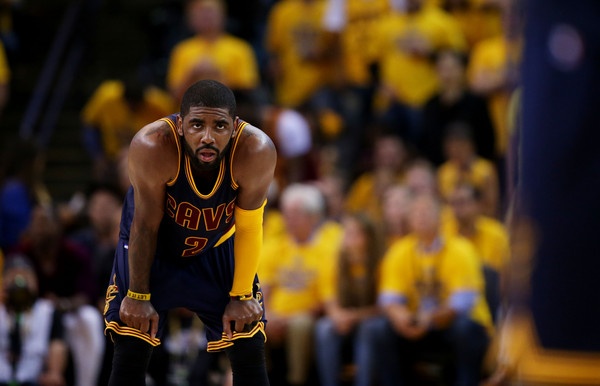 Game 1 of the NBA Finals Thursday night between the Cavs and Warriors wasn’t an instant classic, but boy was it a good game. The Cavs started hot jumping out to a 14 point lead but the Warriors fought back. After the Warriors were able to tie it back up, it was back and forth for the remainder of the contest. Ultimately the Cavs got the final shot in regulation but couldn’t convert. In overtime Cleveland was out matched, out hustled, and just didn’t shoot the ball well. Not only did the Cavs lose the game in overtime but also their point guard, Kyrie Irving, suffered a scary injury which turned out to be a fractured knee cap. Kyrie will need surgery and will miss the remainder of the finals. So now, this brings up the question, was David Blatt foolish for playing Kyrie such a large amount of minutes?

Kyrie Irving tallied 43 minutes in game one and was extremely effective. He appeared way better than in the pervious series vs Atlanta. He wasn’t hobbling around as much and you could see more explosion when driving to the hoop. It appeared he was going to be able to make large contributions to this series until he went down with the injury. David Blatt and the Cavaliers coaching staff could potentially have avoided this injury by not leaving him out there so long knowing he is not at 100%. 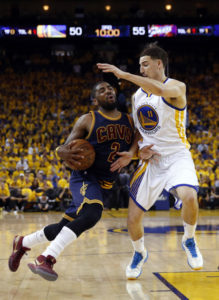 It was not wrong for Blatt to leave Kyrie out there for 43 minutes. This is the NBA Finals, what is the point of holding him out? what are we saving him for ? Had Blatt left Kyrie out of the overtime, wouldn’t he then be getting criticized for not playing his second best player? Yes, he would. Now I understand the Cavs just signed him to a five-year, $90 million extension last summer but we are fighting for a title. If we win this series, the drought is over. No more hearing about how Cleveland has not won a major sports championship since 1964. These fans and this city have waited long enough for a chance to celebrate. To leave out your second best player in the biggest series in Cavs franchise history would be senseless. Kyrie made big shots in Game 1 and looked nearly 100% in the first half. He played as a great wingman for LeBron James and put up 23 points, seven rebounds, six assists, four steals, and two blocks. Not only that but he was guarding Steph Curry very well.

RELATED: 6 Keys For The Cavs To Win The NBA Finals

Kyrie will be back in about 3-4 months. Although it hurts not to have him for the remainder of this series, his future is still bright. He is still a top 10 player and will continue to progress while being a great wingman for LeBron. The Cavs are in no way out of this series. This team has way too much fight and heart to back down. David Blatt made the correct decision by leaving Kyrie Irving out on the court during overtime and playing him 43 minutes. Oh yeah and if Shumpert was an inch closer to the hoop on his last shot, we wouldn’t be having this conversation. 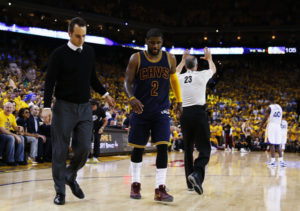