Despite Cavs Continue To Share The Ball, And It’s Resulting In Wins Riding the wave of a seven-game win streak, the Cavaliers have pushed their way back atop the Eastern Conference for the first time in over five years. This early success has come with over 20% of the team salary sidelined, as Kyrie Irving and Iman Shumpert continue to recover from offseason surgery. Cleveland fans are familiar with the seemingly inexorable winning ways of a healthy LeBron, but it’s been the team’s unselfish play and relentless ball movement that has helped them stay hot.

The regular season leader in assists per game has gone on to win the NBA Finals in each of the past two seasons (San Antonio had 25.2 assists in 2013-14, Golden State had 27.4 assists per game in 2014-15), and the Cavs currently sit in 3rd place in this category, dishing out 25.9 assists/game. Only two teams have out-assisted the Cavs thus far, both notorious for sharing the ball in a team-based system: the Atlanta Hawks (26.9) and the Golden State Warriors (29.6—of which Cavs fans are all too familiar with). High assist numbers don’t always translate to success, but it certainly looks as if the league is trending in that direction, as six of the last seven NBA finals included a team that finished either first or second in regular season assists pergame.

The Cavs can attribute most of their assisting success to King James himself, who leads the team in assists while facilitating countless scoring and passing opportunities for each of his teammates.

The alarmingly productive Mo Williams is a great example of LeBron’s impact on his teammates. Mo’s only all-star appearance came in his only healthy full season with LeBron, and he’s sure playing like his all-star self again so far. In his career, Mo Williams averages 4.3 more points per game with LeBron as a teammate than he does without (16.8 points with compared to 12.5 points without). While filling in for Kyrie, Williams has posted 16.5 points and 5.5 assists in eight games, reaffirming both LeBron’s influence and Mo’s resilience.

But despite Mo Williams’ successes, a different Cavalier is dishing out the most assists from the point guard position. That honor belongs to Cleveland’s favorite Aussie and “the dirtiest player on the planet”, Matthew Dellavadova. Delly is averaging 5.8 assists per game off the bench, while posting a +64 scoring margin on the court, good for 15th best in the NBA. Perhaps more impressively, Delly is 4th in the league in assist to turnover ratio (4.18), avoiding his infamous alley-oops to no one and finding the high-flying Tristian Thompson instead: https://vine.co/v/el7lvXv3vAp

The unrelenting ball movement of the Cavalier offense is increasing team assists by presenting the Cavs with much better shot selection. No one benefits from this sentiment more than Kevin Love, who despite shooting just 31.6% from behind the arc, is fourth in the league in catch-and-shoot points, at 7.5 per game.

The Cavs look to continue their assisting ways and find more uncontested shots (sorry, J.R.) as better teams work their way into the schedule.

But as we critique and enjoy the unselfish play of the 2015-2016 Cavaliers, it’s important to keep one thing in mind: the Cavs have the greatest player in the world, and he can make an unassisted score look this easy: 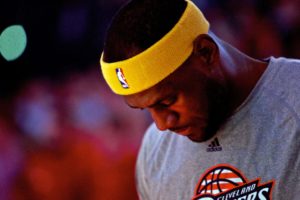