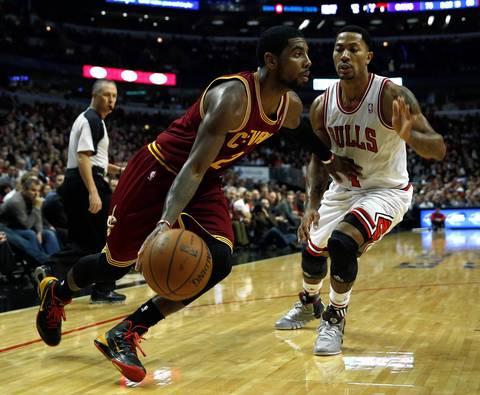 Coming off an MVP performance at the 2014 FIBA World Cup, Kyrie Irving’s expectations for the upcoming season are tremendous. The young point guard can learn from his predecessor Derrick Rose after he had his success in the 2010 FIBA World Cup.

After the USA lifted the 2010 FIBA World Cup trophy in Turkey, Derrick Rose had the most successful season Chicago Bulls fans have seen since Michael Jordan and Scottie Pippin were on the court. The 2010-2011 Season was a massive success for Rose and the Chicago Bulls, as they made it all the way to the Eastern Conference Finals only to come up short vs LeBron James and the Miami Heat. Even after the 2011 playoff loss, the Chicago Bulls were among favorites for the 2012 NBA Finals with Rose coming off an MVP season. That year, the Bulls would finish as the best team in the East for the second season in a row. Everything was going according to plan for Chicago, until Derrick Rose went down with an ACL injury against the 76ers that would sideline him for much longer than the rest of the season.

{adinserter 2}Now, after the 2014 FIBA World Cup, expectations for the 2014-2015 Cleveland Cavaliers are just as high if not higher than that of the 2011-2012 Chicago Bulls. What Kyrie Irving needs to do more than anything if the Cavaliers want to compete for a NBA Finals trip is to stay healthy. If Kyrie Irving has learned anything from watching Rose play in both International and NBA games, it’s that Rose’s constant attacking the paint style has taken a toll on his body, and that Kyrie can’t be that same type of player. While Derrick Rose only had a supporting cast of Carlos Boozer and Joakim Noah, Kyrie has LeBron James, Kevin Love, and Dion Waiter. That is extremely significant, because Kyrie, MVP of the 2014 All-Star game as well as the FIBA World Cup, has had tremendous experience for playing off the ball alongside superstars and scoring while conserving energy.

As the season progresses, Kyrie will need to learn how to become a true point guard. On a team where 4 of the 5 starters can easily take 15 or more shots a game, a lot of Kyrie’s shooting will be substituted with passing in order to facilitate his teammates. If the Cavaliers want to win a Championship, all players, regardless if they’re starters or reserves, will need to accept and excel at the roles most conducive for the team’s success. For Kyrie Irving, learning from Derrick Rose’s 2011 season tragedy in order to improve at the point is a priceless responsibility he must take upon himself. Stay healthy, help your superstar teammates, but don’t forget to get the occasional: BUCKETS.