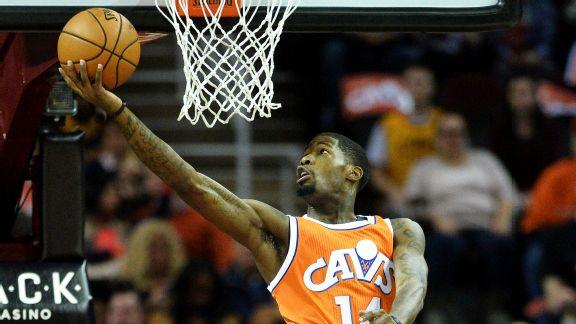 After fighting off last year’s championship piece, Dahntay Jones, for the final roster spot with the Cavaliers, not many would have foreseen the vital role Deandre Liggins wields on the bench this season.

All of a sudden, Liggins found himself in a starting role in JR Smith’s absence, and an integral rotation role player off the bench. Expectations were Liggins would be playing garbage time minutes, but Liggins has been superb, and is playing a prominent role so far. Take his defense against elite point guards, like Kyle Lowry, as example.

The Kentucky product has been tenacious defensively, active with his hands against guards and unfazed by forwards. His defensive reputation has followed him throughout his D-League and brief NBA career, and instead of modeling his game around conventional superstars in the NBA, Liggins patterns his game after long-time defensive specialist, Tony Allen.

The Cavaliers take on the Grizzlies in back-to-back games starting on Tuesday, and Liggins was asked about his admiration for the “Grindfather” via Cleveland.com.

“His grit, his toughness.”

“My thing is to stay ready and my opportunity has presented itself and just come in and bring that tenacity on the defensive end, take open shots and make them.”

Coach Tyronn Lue worked with Allen when he was assistant coach in Boston, where Allen spent six seasons, and Lue sees similarities between the two.

“Defensively, yeah,” Lue said. “T.A. (Tony Allen) is smaller, but I think he might be stronger — T.A. is a strong guy. Liggs can shoot it better. T.A. actually played point guard for us for 10 games I think and did a great job. He’s a very smart player. It’s crazy to see that you play the 2 or 3 and then move him to the point guard and he knew all the plays, all the positions and it’s crazy. They have similarities for sure. If (Liggins) can keep playing like that then I mean, T.A. won a championship. Tough, gritty player that everybody would love to have on their team.”

Liggins has more than exceeded expectation, which sheer determination and hard work, and Lue applauds him for this.

“Just every night competing,” Lue said. “Every single night guarding the best player, the 1, 2 or 3, and taking that challenge. It kind of became who T.A. was. He loved it and got up for it every single game. He got up to play and guard the best players and I think Liggs can do the same.”

It’s not just the defensive brilliance that is a similar trait between the two, but the edge they both play with. Liggins is from the tough grind of Chicago, and he recognizes both he and Allen play with a chip on their shoulder.

“Me and T.A. we grew up kind of in the same dirt,” Liggins said. “We always have that competitive edge to us, that chip on our shoulders and teams like that. Every team needs a guy like that on their team to pick up a guy 94 feet and to make a guy rattled a little bit. That’s what I bring to this team.”

The only knock on “Ligs” has been his jump shot since slipping to the second round of the draft in 2011, but with hard work and the upmost faith by his teammates, he understands he can be a threat offensively as well.

No one thought Liggins would be playing such a critical part in the journey so far, but it has been one of many superb stories coming out of the Cavs so far this season. With the Cavs concerns for dribble penetration from opponents feasting off high pick and roll situations, Liggins will have the opportunities to make himself the Tony Allen of the Cleveland Cavaliers.