By now, most fans of the NBA’s defending champion Cleveland Cavaliers know their need of a veteran backup point guard behind Kyrie Irving.

Before last night’s win over the Sacramento Kings (120-108), David Griffin, Cavs General Manager, spoke to members of the media with regards to what may be in the future for his team.

Griffin touched on the aquisition of Kyle Korver, who scored 18 points on 7-of-10 shooting against the Kings, but he also suggested that another move could be made. Sam Amico recants Griffin’s quote in his recent article with www.probasketballdigest.com.

It’s something where we’re all pretty keenly aware that it would help take some burden off of Kyrie and LeBron as our primary playmaker,” Griffin told reporters. “So if we could get somebody else that could do it … and it really doesn’t even have to be a point guard. It’s just we need playmaking.

“The hope is that Kyle gives us the opportunity to create some offense another way, and makes us less dependent on those two play creators. Obviously coach [Tyronn Lue] has done some creative things with Kevin Love to make offense run through him as well.

“But all season, we’ve known we need more playmaking and more intelligence in terms of the decision-making. We’ll continue to try to improve.”

Names of potential backup point guards have been tossed about since the beginning of the season, including Mario Chalmers, Jarrett Jack, Norris Cole, and even Rajon Rondo. Acquiring a solid backup for Irving would give Coach Lue more flexibility with his ‘Big Three,’ who are currently averaging over 32 minutes per game (37 minutes per game for James).

James has previously stated with conviction: “We’ve got to get a point guard.” Griffin’s words seem to indicate that the Cavaliers’ front office will continue exploring their options. 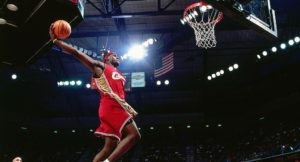