Injury was not a concern for three Cavalier All-Stars going into Wednesday night’s quirky back-to-back, home-and-home game against the Grizzlies. However, the Cavs traveled to Memphis without LeBron James, Kevin Love and Kyrie Irving. It was a topic of conversation on every sports talk outlet for 24 hours, with fans angered at spending their hard earned money on tickets to see the Cavaliers play their bench for the majority of the game.

The situation copped a ton of attention, but it didn’t faze either head coach Tyronn Lue or even General Manager David Griffin, who OK’d the situation before Ty Lue made the announcement after Tuesday night’s game in Cleveland.

“Kyrie is totally healthy,” general manager David Griffin told Cleveland.com. “Ty just felt it was the best way to prepare for the upcoming stretch the rest of the month. He is pretty sensitive to (Irving’s) workload from USA Basketball coming off (a knee) injury the previous season. “There’s just no reason to push anything.”

LeBron James is coming off of six consecutive trips to the NBA Finals, and with the twelve-time All-Star turning 32 in a couple of weeks, rest is a must if he plans to defend the Cavs’ title.

For Kyrie Irving its about maintaining his health. Irving has the ability to be one of the best scorers in the entire NBA, and while the fans aren’t happy to see him not even board the plane, now with an entire week’s rest, Irving will return raring to go. The way I see it, a night off for our three champs in December doesn’t do the Cavaliers any harm, but playing one too many games could end devastatingly and ruin an entire season.

The Cavs are about to enter a crazy stretch of the season. After a couple nights off they’ll play the Lakers at the Q, then they’ll be faced with 7 games in 11 nights, including a weird home-and-home back-to-back series with the Bucks and the Christmas Day showdown against the Warriors.

A night off for James, Irving, and Love against the Grizzlies only means a fuller tank on December 25th when we ‘welcome’ those guys from the Bay Area to the Q for the biggest game of the regular season. There’s always a method to the madness. Trust Ty Lue and Griff. Trust the process. 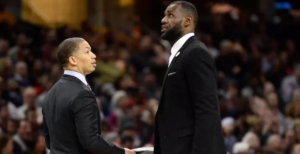