David Blatt, Cavs Have Support Of Israel In NBA Finals 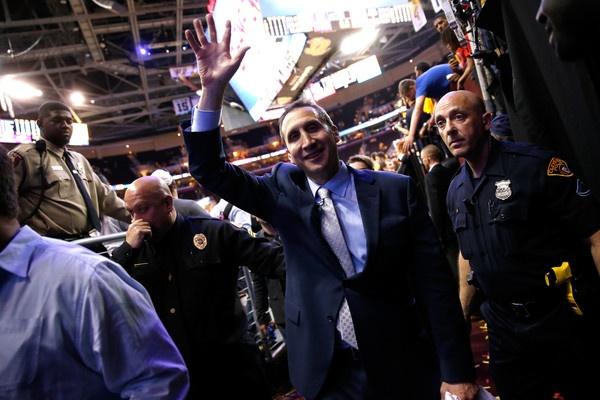 David Blatt has been around basketball his entire life. The American Jewish coach coached all over Europe, but has spent the majority of his time both playing and coaching in the country of Israel.

He was a player for 12 years and has been a coach since 1993 for teams in Israel, Russia, and Greece. Other than the incredible run at the 2012 Olympics, most of his accomplishments have come with the Israeli teams.

Earlier this week, Israel’s Prime Minister congratulated Blatt on his accomplishments and gave him support in the upcoming NBA Finals.

“He said all of Israel is behind the Cavaliers,” Blatt said Sunday. “That was great.

“I have been fortunate enough to hear from the Prime Minister of Israel, to the then Prime Minister and president of Russia (Dmitry Medvedev), and there’s nothing I would like better than to hear from (President Barack) Obama,” Blatt said. “That sort of covered all the bases, wouldn’t it?”

Blatt’s season has not been easy, as he’s undergone intense media scrutiny throughout the season. But that’s mostly the media stirring up stories and as everyone knows, winning heals everything.

Early last week after the Cavs defeated the Atlanta Hawks in Game 4 of the Eastern Conference Finals to complete the four-game sweep and advance to the Finals, the Israeli-American Council out of New York released a statement calling Blatt an “Israeli-American role model.”

“On behalf of all Israeli Americans in the United States, we congratulate David Blatt, the Cleveland Cavaliers and the City of Cleveland on their thrilling victory as Eastern Conference champions of the NBA,” said Shawn Evenhaim, chairman of the Israeli-American Council, in a news release. “David is an Israeli-American success story – a true leader and role model who symbolizes our love for both Israel and the U.S.”

The Cavs have had one of the toughest seasons an NBA team can have, but are now just four wins away from bringing a championship to ‘The Land’ that hasn’t seen a championship in 51 years.