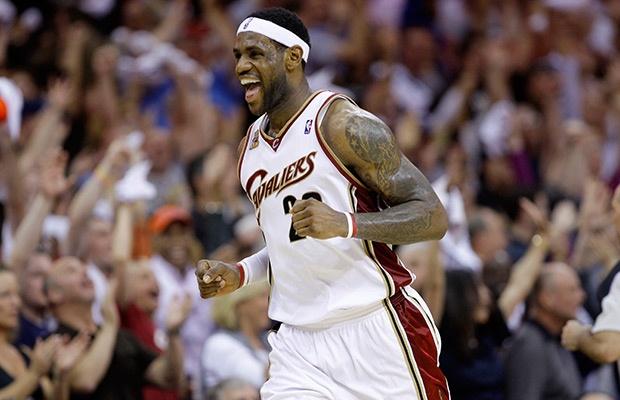 This upcoming Saturday, April 18th, the 2015 NBA playoffs will commence. As we get ready for what is sure to be a wild ride for the Cleveland Cavaliers, we reminisce on LeBron’s best moments in his playoff career. From game-winners, to big-time performances, we have compiled a top 10 list that will get you ready for the playoffs!

We start the countdown off with a breathtaking dunk by LeBron James over a lockdown defender in James Johnson. This was during the first round of the 2010 playoffs, when the first-place Cleveland Cavaliers played host to a young Chicago Bulls team in eighth place in the conference. Though this play was terrific, it held little importance as the Cavs made quick work of the Bulls, jousting them in 5 games in the first round.

Click ‘Next’ to see the ninth greatest playoff moment from LeBron James’ career! 9) The Key Three Over Thabo

With the Miami Heat up 2 games to 1 against the Oklahoma City Thunder, and with five minutes to go in a tie game, LeBron James drives the lane – only to come crashing down to the floor, resulting in a costly turnover. It was no ordinary tumble, as evidenced by LeBron’s lethargic motions when getting back up. He had sustained an injury, a cramping of sorts in his legs. His hobbling resulted in being the last player to get back, but also the first player out on the break triggered by a Dwyane Wade block. The real showcase of greatness was when LeBron, after a few minutes out of the game with injury, returned to hit a crucial three pointer that would seal the game, and ultimately, his first title.

Click ‘Next’ to see the eighth greatest playoff moment from LeBron James’ career! 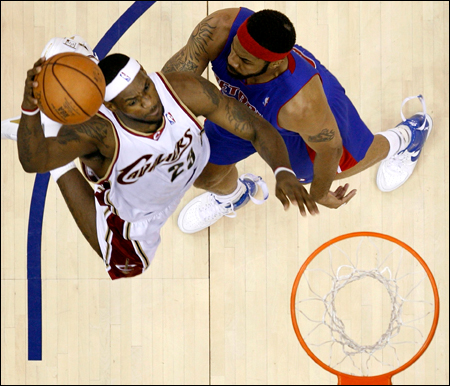 8) Dunk The ‘Sheed Out Of That Ball

Remember that incredible run by LeBron James in 2007 NBA Playoffs? You know, the one where LeBron single-handedly willed the Cleveland Cavaliers to the NBA Finals where they unfortunately lost to the San Antonio Spurs in four games? It was pretty amazing, no? Anyway, in the Eastern Conference Finals against the Detroit Pistons, the Cavs needed James to come up big after losing the first two games in the Motor City. ‘Bron ‘Bron responded by leading Cleveland to four consecutive victories. During Game 3, The King set the tone for the rest of the series with this ferocious dunk on Rasheed Wallace’s mug. It got the crowd ignited and the Cavs won four in a row to clinch the East.

Click ‘Next’ to see the seventh greatest playoff moment from LeBron James’ career! 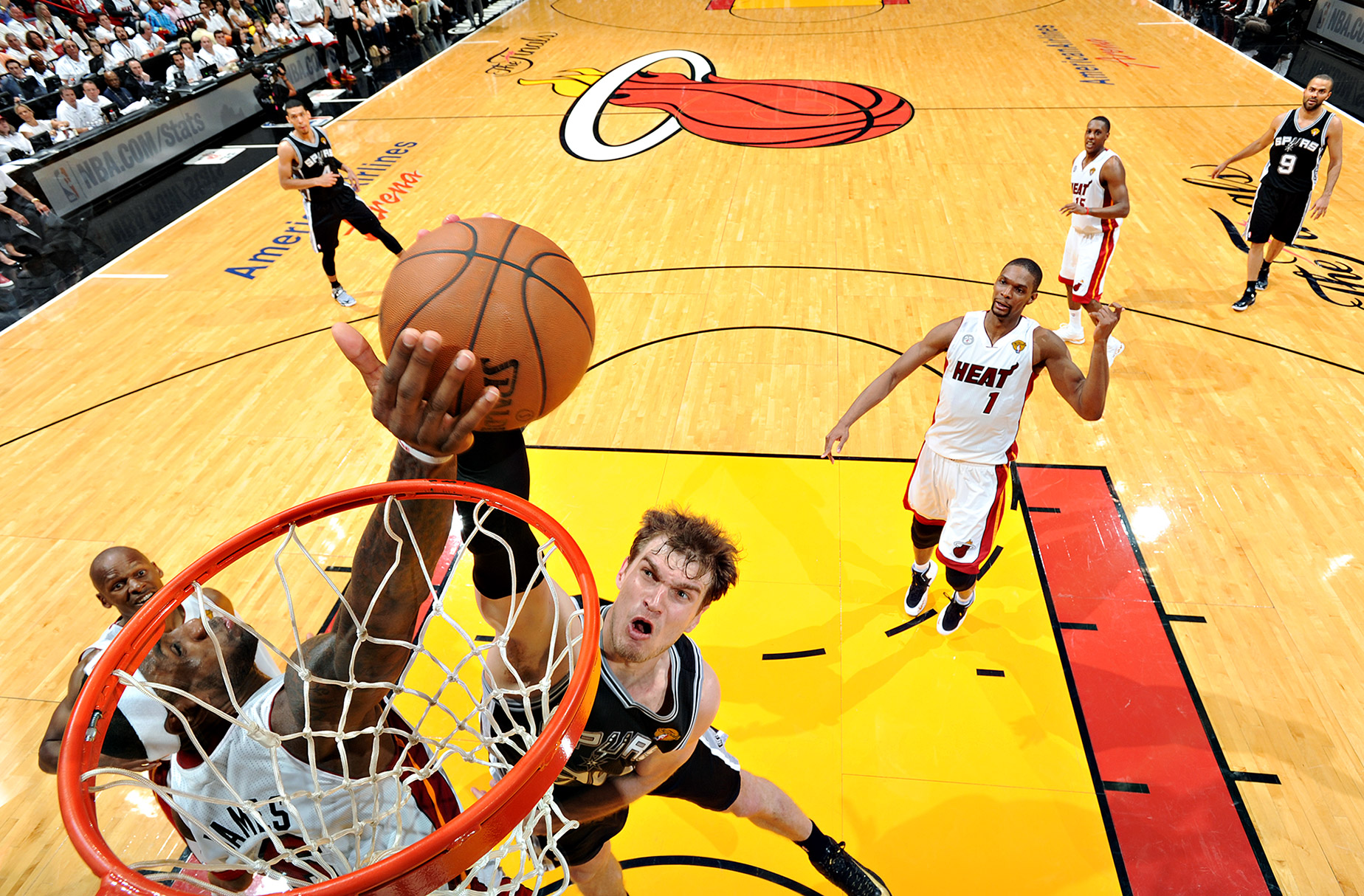 Perhaps one of the greatest blocks in NBA Finals history, LeBron James risks embarrassment, by going up top to try and contest a Tiago Splitter dunk attempt. The play ended in James emphatically rejecting the 6’11” Splitter and putting an exclamation point on Miami’s Game 2 win against the Spurs in the 2013 NBA Finals. What made this play more impressive was how clean the block was, leaving no debate as to whether it was a foul.

Click ‘Next’ to see the sixth greatest playoff moment from LeBron James’ career!

With the Cavs in a 2-3 hole against the Boston Celtics in the 2012 NBA Finals, the Heat needed a crucial game 6 win in order to force game 7. This was as must-win as you could get for the LeBron-led Miami Heat, who came into the game strong. Scratch that. LeBron came into the game strong with a dominant display that showcased his mettle when it came to important games. Not only did he score 45 points, but he also grabbed 15 rebounds. After his embarrassing performance in the previous year’s finals, this kind of performance was needed to reinforce the notion that LeBron is certainly capable of turning on the jets when it mattered most.

Click ‘Next’ to see the fifth greatest playoff moment from LeBron James’ career!

LeBron’s second and last buzzer-beating game-winner. With the Heat on the brink of losing home court advantage to the Indiana Pacers in Game 1 of the 2013 East finals, LeBron took matters into his own hands and delivered a game-winning layup after cutting Paul George to the rim. In hindsight, this play was imperative because, had the Heat ended up losing this game, they would have more than likely lost the series, which came down to Game 7. And of course, if they had lost the series here, LeBron would not have had his second ring. After the series’ conclusion, Frank Vogul, coach of the Pacers, applauded LeBron, labeling him the “Michael Jordan of this generation.”

Click ‘Next’ to see the fourth greatest playoff moment from LeBron James’ career!

4) No Regard For Human Life

The Cavs and Celtics may be facing each other in the first round of the upcoming NBA playoffs, but this matchup just doesn’t hold the same weight. The Celtics Big Three (or four if you count Rondo) have long since disbanded, and Boston is no longer the threat they once were out of the East. They won a championship in 2008, but no team in that run challenged the Celtics more than the Cleveland Cavaliers, who took the eventual champs to a closely-knit Game 7 nail-biter. The series produced one of LeBron James’ hallmark dunks of his career: a posterizing dunk on Kevin Garnett after splitting James Posey and Paul Pierce.

Click ‘Next’ to see the third greatest playoff moment from LeBron James’ career!

3) The Dagger Over Kawhi

The final minute of game can be the most intense moments in a game. Especially if it’s on the grandest stage in basketball: Game 7 of the NBA Finals. With the Miami Heat up 2 with under a minute to go, Tim Duncan misses on a point blank layup attempt through some soft defense. This gave Miami a healthy possession to run down the clock. LeBron not only drains the clock to just over 20 seconds, he also drains a cold blooded shot to put the Heat up by 4 en route to LeBron’s second championship.

Click ‘Next’ to see the second greatest playoff moment from LeBron James’ career! 2) His Only Three Of The Night

LeBron’s first buzzer-beating game-winner in the playoffs comes in game 2 of the 2009 NBA Eastern Conference Finals. With the Cavs down 0-1 in the series and trailing the Magic by 2 with one second left in the game, they needed a quick bucket to prevent a 0-2 whole. They play drawn up was for LeBron to cut to the basket for an alleyoop attempt. However Hedo Turkoglu managed to cut him off, so instead, LeBron pulled out to the three point line to receive the inbounds pass from Daniel Gibson. The rest is history. Unfortunately, the Cavs lost the series in 6 games, but this win could have made the difference between a sweep and a 4-2 outing.

Click ‘Next’ to see the greatest playoff moment from LeBron James’ career!

Arguably LeBron’s greatest performance in his NBA playoff career, LeBron goes for 48 points against the Detroit Pistons in Game 5 of the 2007 Eastern Conference Finals. He scored 29 of the Cavaliers’ last 30 points of the game, to single-handedly will his team to a double overtime win. Oh, and he was only 23 years old. Twenty-three. That’s how old Kyrie Irving is right now!