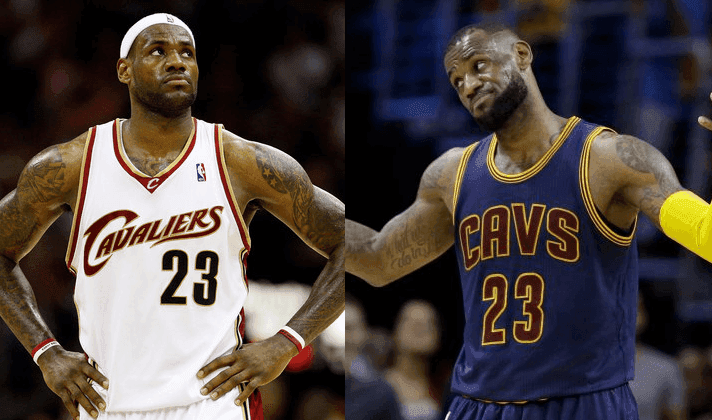 This year has been another record year for LeBron as he’s taken the lead in some Cavalier records while also continuing his dominance on the court. Here, we take a look at 11 of the craziest LeBron James records, starting with number 11:

I still remember watching this game like it was yesterday, cause my mind was absolutely blown.
On the 21st of February, 2009, LeBron James put on a clinic for the Bucks home crowd. His remarkable run in the first 2:50 of the third quarter, almost single-handedly turning a six-point halftime deficit into an eight-point Cavaliers lead. And he could have scored two more in that stretch if he hadn’t missed a pair of free throws.

James took heat check after heat check with hands in his face and just kept hitting, so he’d take a step back further, and then another step. After scoring 16 points in 2:50, the Bucks finally called a timeout.

The most entertaining part of the entire sequence though? Donyell Marshall and Eric Snow’s reactions on the bench.

Click ‘Next’ to see the 10th greatest record LeBron James has achieved!

LeBron is the Cavs all-time leader in multiple categories, and in the top 10 of just about every known statistic there is. But this one stands out more than others.

LeBron has played the 6th most games in a Cavaliers jersey with 615 but that hasn’t stopped LeBron from playing the most minutes in the history of the franchise. James has played 24,543 minutes for the Cavs, at an incredible 39.9 MPG.

To put that in perspective, arguably the most loved Cavalier of all time, Zydrunas Ilgasukas, comes in second in total minutes. Playing 156 more games than James, ‘Big Z’ is 2,723 minutes short of James in first place.

One of James’ most underrated attributes is his motor, his ability to go and go and go. Leading by example, and doing so with almost 40 minutes of game time night in, night out, is phenomenal.

Click ‘Next’ to see the ninth greatest record LeBron James has achieved! 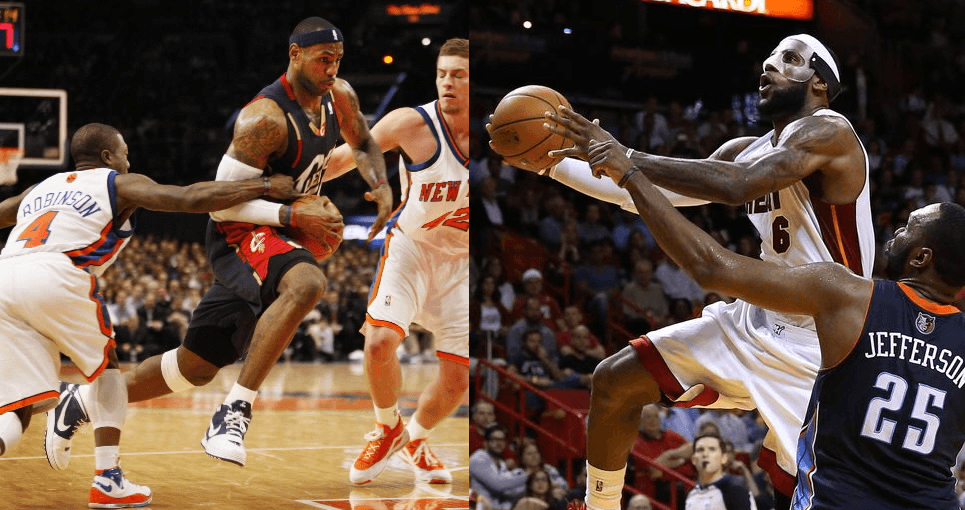 9. Only player in NBA history to score at least 49 points in a playoff game for two different franchises

As a die-hard Cavs fan, it still pains me just a little bit to include a Miami Heat LBJ stat in here, but this one is very very impressive. This one impresses more when you think about the players that have played playoff games for multiple teams.

Kareem Abdul-Jabbar, Wilt Chamberlain, Shaquille O’Neal, Charles Barkley, Julius Erving, Oscar Robertson, Carmelo Anthony, the list goes on and on. But none of these superstars, none of these hall-of-famers achieved this particular feat that LBJ could.

Click ‘Next’ to see the eighth greatest record LeBron James has achieved! 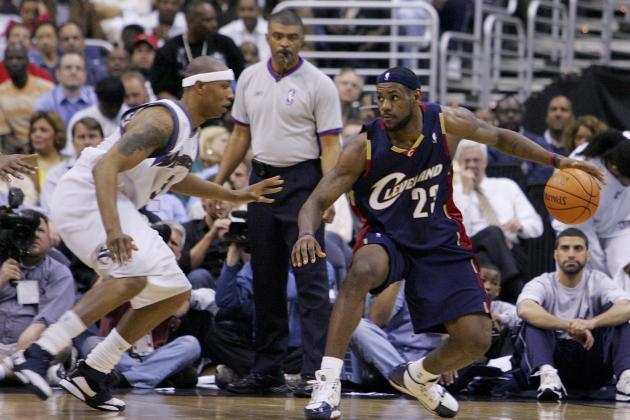 8. One of three players in NBA history to record a triple-double in their playoff debut

April 22nd, 2006, Cleveland’s first playoff game since 1998, and LeBron did what had not been done since Magic Johnson in 1980, post a triple double in his playoff debut.

What a simply incredible stat line to have in your playoff debut. James finished with a game high 32 points, 11 rebounds and 11 assists, and didn’t take a break the whole game, playing 48 minutes.

“Nothing he does surprised me anymore,” Zydrunas Ilgauskas said post-game. “He’s just a terrific player. He’s a tremendous luxury to have, knowing he can go out there any time and put up numbers like that.”

Click ‘Next’ to see the seventh greatest record LeBron James has achieved! 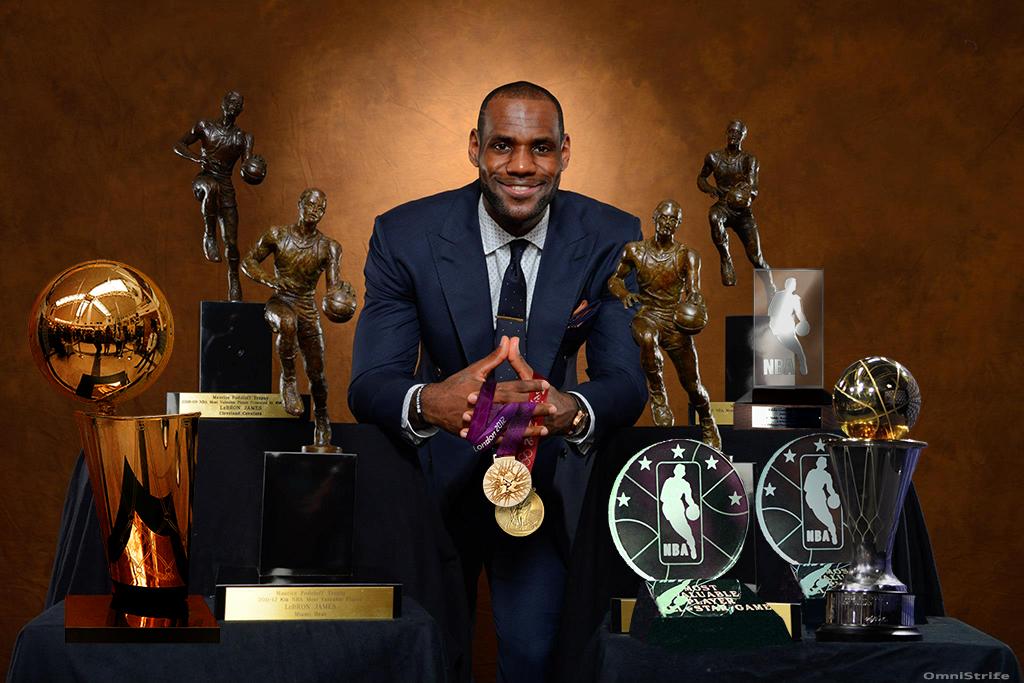 7. One of two players in NBA history to win four NBA Most Valuable Player Awards in a span of five years

In fact, only four other players have won four MVP awards in their careers. MJ, Kareem, Bill Russell and Wilt.

LeBron has won the league’s Most Valuable Player Award twice as a Cavalier, and twice as a member of the Miami Heat, both on back-to-back occasions. The only other player to achieve this feat? The great Wilt Chamberlain.

Click ‘Next’ to see the sixth greatest record LeBron James has achieved!

6. One of two players in NBA history to win NBA MVP, Finals MVP, and an Olympic Gold Medal in the same year

For this record, it all comes down to two men and two seasons: Jordan in 1992 and LeBron in 2012. In those years, each won the NBA’s regular season MVP and Finals MVP. Each won a title. And each followed it up with a Gold Medal.

LeBron is yet again mentioned in the same category as the greatest there ever was, Michael Jordan.

Click ‘Next’ to see the fifth greatest record LeBron James has achieved!

5. Youngest player ever to score 40 points in a single game

LeBron owns just about every ‘youngest to’ award ever known to the NBA, but this one stood out to me.

James scored the winning basket with 16 seconds left on the clock, after deflecting a Richard Jefferson pass. Kedrick Brown grabbed the loose ball and found a streaking 19 year old LeBron James. He finished the play with a layup, making it 105-104 in the Cavs favour.

“I hate losing. I don’t like losing. I seized the opportunity for us to win and I was able to capture it.”

Click ‘Next’ to see the fourth greatest record LeBron James has achieved!

4. Most consecutive points scored for a team in a playoff game

Two words, Game Five. Thinking of LeBron’s performance against the Pistons at the Palace of Auburn Hills in 2007 still gives me goosebumps.

James dropped 48 points in this Eastern Conference Final matchup, including the Cavs final 25 and 29 of its final 30. The win carried Cleveland within one more win of the NBA finals for the first time in franchise history, with a 109-107 double-overtime victory.

Click ‘Next’ to see the third greatest record LeBron James has achieved!

3. Most assists all time by an NBA forward and Cavaliers’ franchise leader in assists

On February 24, LeBron James passed Scottie Pippen on the NBA’s all-time assists by a forward list. James, who currently has 6,283 career assists, passed Pippen’s mark of 6,135.

Just a few weeks later, James passed Mark Price’s assist total of 4,206 to become the franchise’s number one assist man. Despite his playing in Miami

Click ‘Next’ to see the second greatest record LeBron James has achieved! 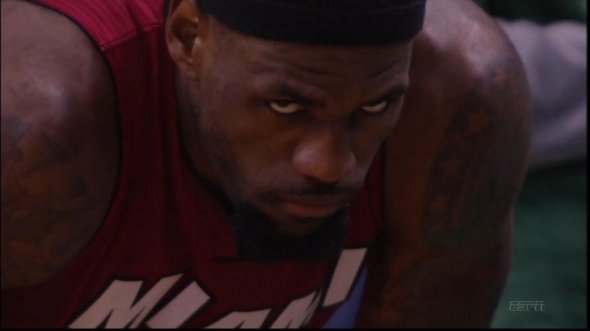 Constantly throughout his career, LeBron has been criticized for passing the ball on final shots rather than taking it upon himself to finish the game for the team. The truth of it all is, LeBron doesn’t need to take the final shot in most situations, and this stat proves he is arguably one of the best clutch players to ever play.

LeBron James has the highest per-game scoring average in NBA history in elimination playoff games (minimum of five such games played) with 31.7 points a game in 14 outings.

Click ‘Next’ to see the greatest record LeBron James has achieved! 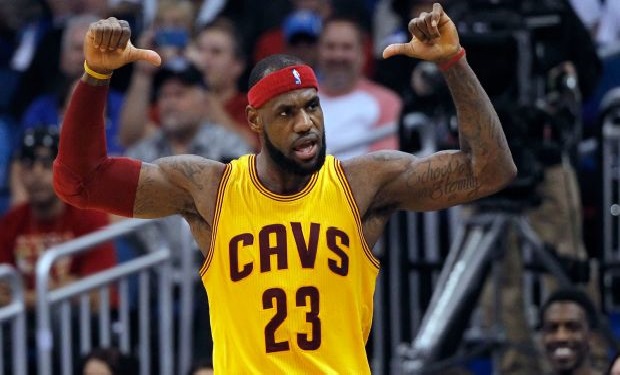 1. Only player in NBA history to post 30 or more points and shoot over 60 percent for six consecutive games

James made 70 of 96 shot attempts over the six-plus game stretch. Only Adrian Dantley and Moses Malone had done the 30-point, 60-percent streak in five straight outings before James joined their club.

“I’m at a loss for words,” James said after the sixth straight game. “Like I say over and over, I know the history of the game. I know how many unbelievable players who came through the ranks, who paved the way for me and my teammates. And for me to be in the record books by myself with such a stat – any stat – it’s big-time.”