Could The Cavs Lose Tristan Thompson? Early during the opening day of free agency, the Cavs and Tristan Thompson had reportedly come to an agreement on a contract that would keep Thompson in Cleveland for the next four-to-five years.

The 6’9” Canadian, who also shares the same agent as LeBron James, reportedly turned down a four year deal worth $52 million early last season to take his chance in restricted free agency. It turned out that he and Rich Paul were either geniuses or just tremendously lucky as Thompson made the most of the unexpected opportunity presented to him in the recently concluded postseason which helped elevate his value in the market.

Both camps were expected to finalize the deal soon, until Draymond Green signed his contract with the Golden State Warriors for 5 years at around $85 million. Soon after, reports surfaced that Thompson and the Cavs were still apart in the contract figures, Chris Haynes of NEOMG reported:

Not a vast gap between Tristan Thompson and #Cavs, I'm told. No animosity, it's just part of the process. Striking deal ongoing.

The good news is that both sides are not that far apart in their talks and they are expected to come to an agreement by the end of the weekend. It doesn’t seem like there’s any chance Thompson will be leaving the Cavs, especially since he’s a restricted free agent. The restricted tag means that the Cavs can match any offer sheet that he signs, but it doesn’t seem likely that teams will offer him more than what the Cavs have.

Stay tuned for all of your Cavs related free agency news! 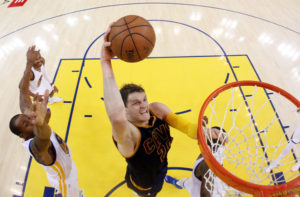