The Cleveland Cavaliers have now played 20 games, which means Darius Garland is now 1/4 of the way through his rookie season. The fifth overall pick has had a rough go, much like Collin Sexton last year. How do the two players compare at this point in their careers, and based on what Sexton did in 2018-2019, what can we expect from Garland moving forward?

These stats show what we already know; Sexton is more aggressive on both ends on the floor, while Garland is more of a true point guard. Garland’s +/- is -6.0, compared to Sexton’s -4.8. Garland’s Player Efficiency Rating (PER) is 6.9, while Sexton’s was 12.0, although that number encompasses all 82 games, including his great second half of the season.

Sexton was not good as a rookie prior to the All-Star break, but Garland has been even worse, despite better talent around him. That’s concerning, but the sky isn’t falling. The deeper into the advanced stats one looks, the more interesting things get. They add context to the basic stats that is needed to truly understand where each player was at this point. These numbers will be from NBA.com’s stats page.

Much has been made of Garland’s poor defense, and it is very poor. But his defensive rating is actually lower than Sexton’s is this season. Darius Garland is at 113.7 while Sexton follows at 114.5. Out of all guards who played at least 10 minutes per game in 60 contests in 2018-2019, Sexton ranked dead last with a 118.1 rating.

DR essentially measures how many points a particular player gives up per 100 possessions. i.e if Garland plays 48 minutes, the Cavaliers would surrender 113.7 points. This is a more accurate measurement than +/- because it doesn’t matter which players are sharing the floor together, how good they are defensively, etc. Only baskets given up by a player are counted against him.

Usage rate is an estimate of what percentage of plays are run through a player while he is on the floor. In other words, it measures how involved a player is offensively. Garland is currently at 20.4, while Sexton finished his rookie season at 24.7. Not a massive difference, but a difference nonetheless.

Sexton shared the floor with less talent as a rookie, meaning he was able to handle the ball more and take more shots. Garland doesn’t have that luxury. He must defer to Sexton and Kevin Love, among others. He’ll often bring the ball up the floor, pass to Sexton, and then sit in the corner while Sexton directs a play.

Garland can appear timid and unsure of himself, both when taking long threes or driving to the basket. He has yet to regain the quickness he displayed in college, as it’s unlikely he is fully recovered from the knee injury that cost him all but five collegiate games. It was always unfair to expect Garland to play like a top pick right from the start, but it is fair to be somewhat disappointed in his performance thus far.

But there is absolutely zero reason to write him off. He’s 19 years old, and has played a total of 25 meaningful basketball games since graduating high school. He’s going to improve as he gets adjusted to the speed and physicality of the NBA. He’s shown flashes of the brilliance that made the Cavs fall in love with him.

Over the last 13 games, he’s scored in double-figures 10 times, including two games of 20+ points. He shot 42% from the field and from beyond the arc in that stretch. He doesn’t need to be an All-Star this season. What he needs to do is continue to learn and improve.

Plenty of fans were down on Sexton at this point last season, and to be fair, he gave them reason to be (Garland is doing the same). But that’s the thing about rookies, especially 19-year-olds; it takes them a while to adjust. Collin Sexton turned on the jets and had an excellent season after the All-Star break. It wouldn’t be surprising in the slightest to see Darius Garland do the same thing. 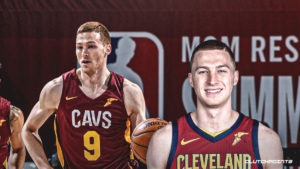