Kevin Durant’s free agency decision this summer changed the whole NBA. Many teams don’t stand a chance at competing while the only other real contenders would be the Cavaliers, Spurs, and possibly the Clippers and Pacers. By creating their super-team out West, the Warriors have also drawn a ton of criticism, mostly aimed towards Kevin Durant and his decision.

Cavs coach Tyronn Lue, however, isn’t criticizing Durant at all. Per Jason Lloyd of the Akron Beacon Journal:

“People get mad about what he did, but to me, I’ve been a player and I’ve been a coach. When you’re free, that means you’re free. You can do what you want to do. He opted to go to Golden State. That’s his choice,” Lue said. “But they don’t say anything or get mad when guys get cut or they trade guys. Nothing is said about that. But as soon as a guy picks a team he wants to go to, it’s a big deal. I don’t understand it. I like KD. I support him in whatever he wants to do.”

In basketball, there’s no such thing as loyalty anymore and you hear everyone say “it’s a business.” This summer alone, Durant joined the Warriors, Dwyane Wade left the Heat for the Bulls, Al Horford chose the Celtics, and Dwight Howard is going to the Hawks. All those big-name stars have moved on, and that’s what free agency is all about: the chance to chase money or rings with your previous team or another. Durant chose the latter on both. 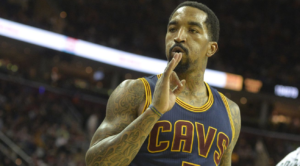