On Tuesday night the Cleveland Cavaliers welcomed an undermanned Memphis Grizzlies squad to the Quicken Loans Arena, doing battle without their star point guard, Kyrie Irving. Tonight in the home-and-home rematch against those same Grizzlies the Cavs will be met with an even bigger challenge. Doing battle without the help of LeBron James, Kevin Love, AND Kyrie Irving.

No Kevin Love, Kyrie Irving or LeBron James tomorrow night in Memphis. Ty Lue says they will not travel either. #Cavs

With the two games off against the Grizz, Kyrie will land himself a full weeks rest after complaining of “heavy legs” after the weekends back-to-back against Miami and Charlotte. “He wanted to play,” Lue said. “I just said take another game off and he’ll be ready to go, that will give him seven days to work on his game, get his legs back, get his rehab and hopefully he’ll be ready to go come Saturday.”

LeBron will take a well-needed night off after flying to New York and back on Monday night to accept his Sports Illustrated Sportsperson of the Year award.

“I’ve been in this league 14 years. I shouldn’t have to explain me sitting out a game or not playing games,” James said. “I’ve played in every arena, including Seattle that’s no longer here. It’s not like it’s my first year. I’ve got 14 years. I’ve paid my dues and more than a lot of guys in this league. But I’ll ride with my coach.”

Kevin Love almost sat on Friday night against the Miami Heat due to a stiff lower back, and will earn himself a rest night after already posting a 29 and 13 stat line against the Grizz.

With the ‘Big 3’ sitting out it’ll be a tough test for the Cavs, but this will be far from a walk over win. J.R Smith seemed to find his stride last night (in the first half at least), shooting 6-10 from deep and ending the night with 23 points, a season high. Smith will be looking to build on his hot shooting night, while Iman Shumpert should also fill a partial piece of the void left by LBJ and co.

Cleveland pride themselves on playing great defense, leading to quick and harsh transition baskets. Although LeBron’s elite floor vision will be missed in those moments, Cleveland will stick to the formula that has got them to this point, defense, hard work and hustle. 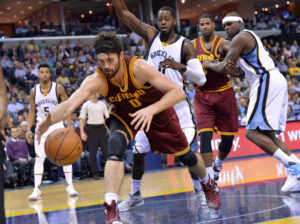