ClutchFeed: Cavs-Bulls gives Irving and Korver a chance at rest; LeBron gets rest 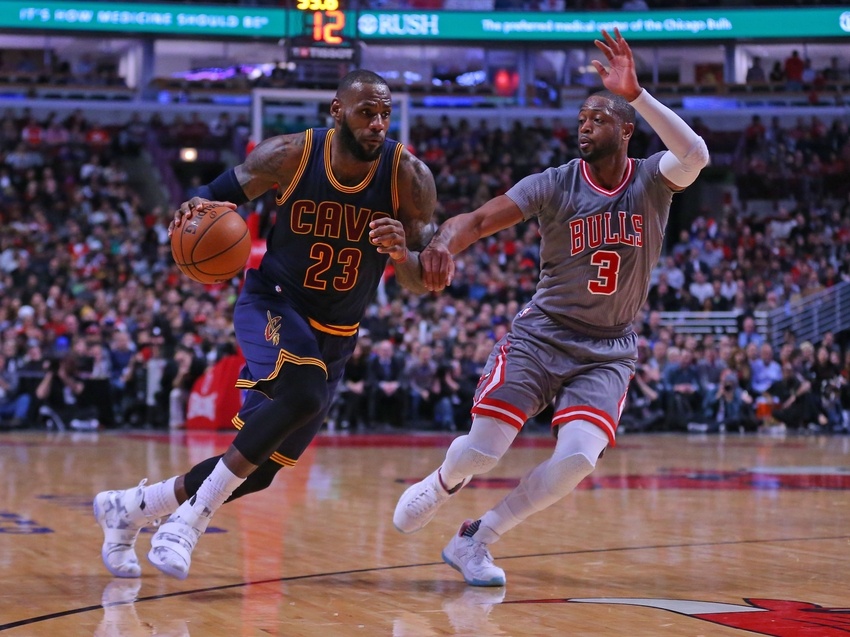 STARTING LINEUP CHANGE:  LeBron James is out due to illness – Richard Jefferson will start in his place.

UPCOMING MILESTONES:  With four more three pointers, Kyle Korver reaches 2,014 for his career, and passes both Jamal Crawford and Vince Carter for 5th most in NBA history. With eight more assists, Kyrie Irving reaches 2,000 assists for the Cavaliers, and becomes just the eighth player in franchise history to reach this mark.

As the Cavaliers continue to roll offensively, they now look to welcome the Chicago Bulls to Cleveland. While currently sitting with 7th seed in the Eastern Conference and a record of 28-29 this season, the Bulls have won three games straight coming into tonight, including a 105-94  win against the Toronto Raptors [fourth in the East] and a 104-103 win against the Boston Celtics [second in the East]. The Cavaliers also have a win streak on the line, as they have won four straight. The Bulls are coming directly off of an overtime game last night, while the Cavaliers have had a full day of rest.

Tonight marks the third time these two teams have met this season, with the Bulls winning both previous matches – 110-105 on December 2nd and 106-94 on January 4th. In both contests, Jimmy Butler led the Bulls in scoring [26 points, 20 points] as LeBron James led the Cavaliers [27 points, 31 points]. In the 10 regular season games played between the two teams since the 2014-15 season, the Bulls have won six.

As a team, the Bulls tend to play inside, with 61.7% of their points coming from two point shots – second highest in the league, and a full 13.8% higher than the Cavaliers. They shoot the least threes per game, as well as have the lowest three point percentage in the league at 31.9%. In the first matchup with the Cavaliers, they 16.7% from three. However, in the second matchup, they had made the most threes in any game this season – 13 – while also shooting 43.3%, so the Cavaliers still have to be wary of them starting to get hot from distance. With 46.5 rebounds per game – second most in the league – they are able to also secure a fair amount of second chance points, with a second highest 15.7 per game. They make an average of 19.7 free throws a game – third most – which  accounts for 19.2% of their total points, so the Cavaliers need to recognize their ability to draw the shooting foul.

Key players to watch for on the Bulls will be Jimmy Butler (averaging 24.4 points, 6.2 rebounds, and 5.0 assists per game) and Dwyane Wade (averaging 19.2 points and 4.5 rebounds).

Tipoff is set for 8:30 EST and will be broadcast on ABC. 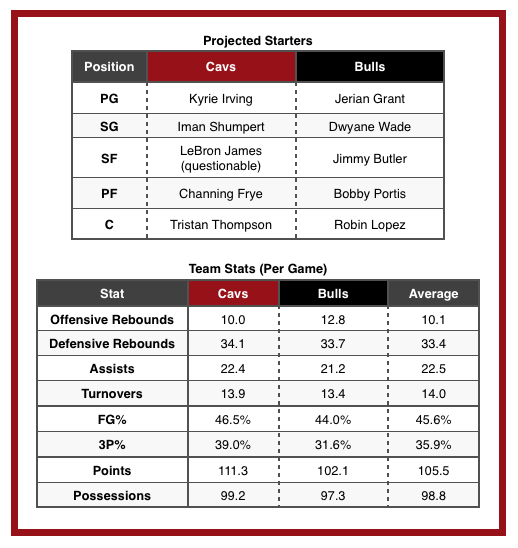