To finish off a three game road trip, the Cavaliers head to Miami to take on the Heat, who are currently the 9th seed in the Eastern Conference. After a rough 10-31 start, the Heat are now 28-34 after going 18-3 in their last 21 games. For both teams, this marks the tail end of a back-to-back – with the Cavaliers winning 135-130 against the Hawks last night while the Heat lost to the Orlando Magic 99-110. Unfortunately, the Cavaliers will be shorthanded, as both Kyrie Irving and LeBron James are out due to resting, placing a lot of pressure on the Cleveland bench.

These two teams have played once already this season – a 114-84 victory for the Wine-and-Gold on December 9th where the Big Three of the Cavaliers each had over 20 points. The Heat on the other hand had five players in double digits, and were led by none other than Derrick Williams with 17 points, who was just officially signed today by the Cavaliers after two consecutive 10-day contracts. Since LeBron James’ return, the Cavaliers have been dead-even with the Heat, winning four out of the eight matches.

As a team, the Heat look to attack the basket. They average 35.2 drives per game – second most in the league. As a result, they also score a high percentage of their points – 43.7% – while inside the paint. They score the seventh least point per game. On defense, however, they give up the fifth least points. The Heat have forced their opponents to shoot the seventh lowest field goal percentage and the seventh least three point percentage, so the Cavaliers have to really look to find the open shot. While around the rim, the Heat have averaged 5.6 blocks per game – fifth most in the league. 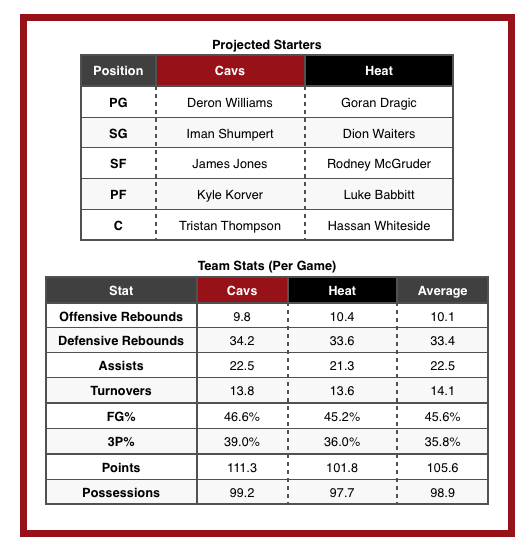