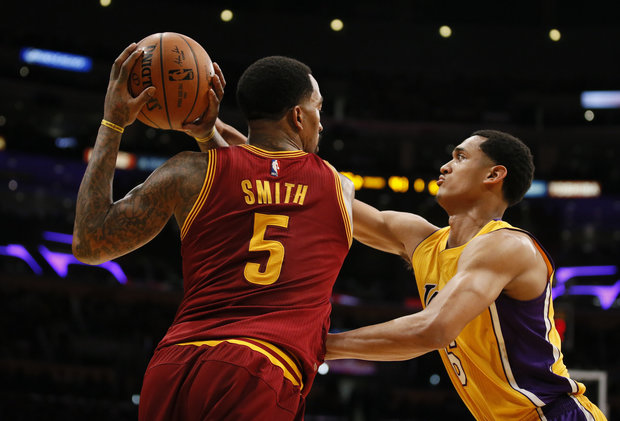 Cleveland is currently losing several categories they normally don’t tonight on both ends. Juilius Randle is leading both teams in assists, and that really just isn’t ok for someone who forces shots in transition.

The limited Lakers typically leverage everything available to them, like their bench that leads the NBA in scoring. D’Angelo Russell’s 22-point start has exposed the Cavs perimeter defense, so rotations will need to be tighter. Using just pick and roll, Russell has found eight uncontested shots thus far tonight, and he’s sunk five of them.

The Lakers are also one of the more unpolished teams in the NBA, but they have no unforced turnovers thus far tonight. Cleveland will have to anticipate passing lanes and surprise this young team with a change in pace in the second half.

LeBron James, Kyrie Irving and Kevin Love have also accounted for 48 of Cleveland’s first 55 points in the half, so look for Coach Lue to find other player in the third quarter and go to the hottest member of the Big Three if the game is close in the fourth.

UPCOMING MILESTONES:  A win will secure a playoff spot of the Cavaliers for the third season in a row. Kyrie Irving needs nine more three pointers to hit 700 total in his career. In addition, J.R. Smith needs four more threes to have hit 400 for the Cavaliers.

The Cavaliers are once again in Los Angeles tonight after falling to the LA Clippers 78-108 without any of the Big Three yesterday – they look to take on the Lakers, who have been continuing to slip recently. With a record of 20-49, the Lakers are dead last in the Western Conference, have won just one of their last ten, and have lost four straight games – the longest active losing streak in the league. In addition, they have shut down both Luol Deng and ex-Cavalier Timofey Mozgov for the season despite both being health in order to have the Lakers’ younger players play more minutes. Their most recent loss came on Friday in a 103-107 contest against the Milwaukee Bucks. With a well rested Big Three and a favorable matchup, the Cavaliers will hopefully be able to use tonight’s game to continue to get Kevin Love and JR Smith back into action, as well as hold onto their 1.5 game lead on the Eastern Conference first seed.

Last time these teams met – on December 17th – Kevin Love led the Cavaliers with 27 points and 17 rebounds to a 119-108 victory. Kyrie also managed a double-double, scoring 21 points and putting up 12 assists. The Lakers were led by Nick Young, who scored 32 points on 63.2% shooting. As a team, the Cavaliers have won five straight against the Lakers.

The Lakers prefer to play with pace, averaging the fifth most possessions per game  at 101.1. Offensively, they rely heavily on their bench production, with their bench scoring the most points per game – 22.5 – and the second most minutes per game – 49.3. With the Lakers allowing the second most opponent fast break points per game, the Cavaliers may find success in their transition game tonight. Within eight feet of the basket, they have allowed teams to shoot an NBA-high 61.4%, allowing teams to score easily in the paint against them. With active ball movement, the Cavaliers should be able to find good shots both in the paint and outside. With a poor shooting performance last night (38.6% from the field and 18.5% from three), tonight presents an opportunity for the Cavaliers to get their shooting rhythm back.

Tipoff is set for 9:30 EST and will be broadcast on FOX Sports Ohio and NBATV. 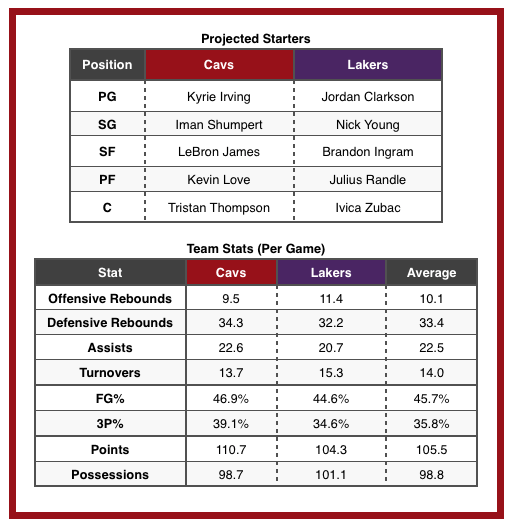