The NBA salary cap is set to take a historic jump. Fueled by a $24 billion TV deal (and $50k NBA Finals Game 7 tickets, albeit to a lesser extent), most projections have the 2016-2017 cap set at right around $94 million. This is almost a 35% rise from the $70 million of this year, and a far cry from the usual small and incremental rises.

For most teams, it means that they will have more salary slots and more to spend on free agents. For the Cleveland Cavaliers’ Dan Gilbert, it means that he is responsible for much less luxury tax next year. The Cavs were an NBA-best $24 million in the luxury tax last season and are thus responsible for $60 million in luxury tax. For Cleveland, the cap jump is not as much an opportunity as it is a release valve.

David Griffin saw this coming, though. The flip side of a cap jump is that it adds value to the players who are already under contract, and Griff did well in the 2015 offseason to lock down Shumpert, Love, and Thompson at amounts that were somewhat questionable at the time. Now, Shumpert looks like a bargain in a world where Harrison Barnes will get the max. Love has returned to full health and is finally finding himself on the court. And Tristan Thompson has more than demonstrated his value in his improvement and his play in the Finals.

The cap rise is so drastic that the Cavaliers could easily escape the luxury tax despite the fact that they have no large expiring contracts. However, this would mean releasing Dellavedova, Smith, Mozgov, and Jones with only six million dollars left to fill four roster spots. But the Cavs still hope to be competitive next year, and that pretty much rules out that course of action.

What situation will the Cavs be in next year? It will largely depend on how they manage to re-sign their free agents. Dellavedova is the target of multiple teams and is likely to sign his first big contract elsewhere. Smith is a critical part of Cleveland’s future as a two-way player and will likely be retained at around $10 million. Mozgov is unlikely to stay as he is also being targeted by other teams.The Cavs will also likely add salary with a veteran minimum (Kaman?) and the full mini Mid-Level exception (Barbosa?).

Here are the payroll numbers moving into next year. So even in this scenario, Cleveland ends up only about $10 million over the tax line. This isn’t the worst spot to be in – they can shed that salary to avoid the tax mid-season by unloading Shumpert and Kaun, or Dan Gilbert could again go on a spending spree and bring in more salary via one of Cleveland’s multiple trade exceptions. Ultimately, however, Dan will probably look to spend less now that Cleveland has finally won a championship. 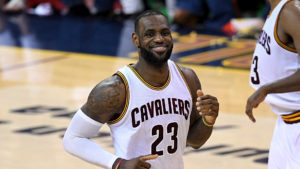